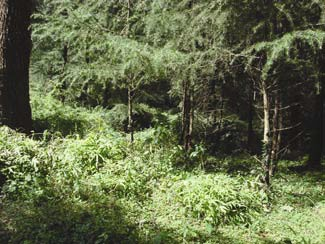 Uttarakhand, a state formed just ten years ago spans over an area of 51,125 square kilometers and has a 64% forest cover. The forests of Uttarakhand are important, not merely for the state but for the rest of the country as well; especially for the neighboring state of Uttar Pradesh. Till 8 November 6, 2010 Uttarakhand was part of Uttar Pradesh only. Once the state was carved, it took away the forest wealth of U.P., but also got in legacy the natural disasters like landslides and earthquakes.

Forests have a lot to do with the landslides. They hold the hill slopes in a tight grip and do not allow mass wasting easily. Hill slopes devoid of forests are prone to denudation by natural agencies like wind and water, which results in lose material in much higher quantities being washed down the slopes to the rivers. More the quantity of material carried by the Himalayan Rivers, more are the chances of devastating floods in the plains.

Therefore, protection and conservation of forest wealth becomes vital for the survival. But the question is how to go about it? From the moment the man realised the significance of fire, he started burning wood as a fuel and from the day, man moved out of his cave abode to a house he started using timber. And so on the need for wood went on increasing. The net result was rise in the cost of wood. Demand decides the price. Costlier the item, more prone it is for thefts and wood is no exception.

By hacking a tree we might beautify our house or get the finest furniture made for a comfortable perch throughout the life, but we seem to forget that a trees lost take a 100 years to grow back to their old glory! The love for gold and wood seems to be an age old one in the humans.

Our ancestors however, had a different view. They also liked the wood, but rather respected it and worshipped the trees. At some stage the religious faith became so deep that small patches of forests were declared as sacred forests. Those were the days when scientific thought had not emerged, or even it was there it was under the clout of religion. Thus what people of those days revered as sacred forests have become biological hotspots of present days.

Sacred groves are kind of indigenous ways of protecting trees and forests. They have the planted trees and also the relict vegetation of that area. Trees are not merely sinks of Carbon Dioxide but they are home to myriads of birds, animals, insects and even microscopic creatures. The root zone of a tree is an ecosystem in to itself. A rich variety of microbes reside in the root zone. In combination with the dead leaves and dead microbes the living ones produce the humus, which imparts permeability to the soil, allowing water to pass through the interspaces between soil particles. This humus has a great property of attracting water, therefore, wherever humus is present molecules of water for a wet ring around. Clay also has similar property. The humus and clay combined form a rich soil. A soil rich in moisture has a microclimate of its own, buzzing with life.

Another great significance of trees is that the presence of moisture and nutrients produced from the dead leaves and microbes promote a microbial activity within the soil, converting the soil in to an active ecosystem.

It is strange that our ancestors though unaware of all these nuances somehow knew that trees are important for our existence and without them we become vulnerable. That is why sacred groves came in to existence, especially in the Himalayan terrain. Northeastern region of the country is famous for such groves (read ‘Himalayan Hot Spot needs attention’-boloji.com-February 2007). Similarly in the northern part of the country Uttarakhand also has its share of sacred groves.

Several researchers have traversed the wilderness of Uttarakhand in search of such sacred groves. Some of groves already reported and researched upon include Hariyali Devi in Chamoli district, Chiplakedar in Askot wildlife sanctuary, Pithoragarh district, Binsar, Tarkeshwar, Tapovan, Nagdeo, Goldev, Mayavati, Kot, Nandisain, Paabo, Dewal and Chapdon. Infact the list is endless. Savita Bisht and J.C. Ghildiyal of Government P.G. College Kotdwara estimate that there may be more than 1000 such groves in Uttarakhand. In addition several other groves like Thalkedar and Nakuleshwar,  and Haat Kali sacred groves of Pithoragarh, have been reported by researchers from National Botanical Research Institute (NBRI), Lucknow.

A recent addition to the long list has been made in a paper published in Current Science by Harsh Singh (Research Fellow), Tariq Husain and and Priyanka Agnihotri of NBRI, Lucknow. They have described two hitherto lesser known sacred groves of Pithoragarh district in Uttarakhand. While carrying out biodiversity survey in the area they noticed relict vegetation and dense forests maintained by the local communities. These folks have a strong belief that their deity resides in these forests. As such they protect it with the best of their ability. Grazing, cutting trees and poaching and collection of non-timber forest products are strictly forbidden say Priyanka and her co-workers.

The grove at Jakhani has trees more than 100 years old says Priyanka and is spread over 30 ha land. It has the temple of the Goddess Vaishno in the thick forest. The community which looks after the forest and the temple is called ‘Gangola’, so named after Gangolihat the nearby township. The Chandika Devi sacred grove has the temple of Devi at the centre of the grove, surrounded by dense growth. This temple is known for ‘tantrik’ rituals and goat sacrifices.

These groves are characterized by dense growth of pine, cedar and rhododendron trees. But the variety of flora is tremendous. There are 112 species of plants in these groves out of which 56 species are of medicinal plants, report Priyanka. In addition there are 12 species of fodder and forage plants, six species of oil yielding plants and four species of timber plants she says.

From the religious belief point of view these groves are so sacred that not a single leaf is touched. Yet we know it well that thieves do not spare even the jewels in the sanctum sanctorum of the temples, while the groves are open from all sides and vulnerable for thefts.

There is a need to establish a buffer zone around all sacred groves. The buffer forest would act as a deterrent feel the researchers. Well world over since times immemorial sacred groves exist. Some of the prominent ones were in the ancient Near East and prehistoric Europe. The Celtic, Germanic, ancient Greek, Near Eastern, Roman and Slavic polytheism all had their groves. Many of which still exist. Many of them were hacked due to religious opposition by the invaders.

Fortunately such conditions do not exist in India now, yet the risk of theft of trees and medicinal plants from such revered places can not be ruled out. The government has to lend a hand to the society in the preservation and conservation of such groves. From the environment point of view it need not be emphasized that these dense forests are invaluable for the survival of mankind. It is strongly felt that the religious sentiments we have for such groves if it could be extended to normal forests too, may be part of them would survive our axe!