Sri Harmandir Sahib, also known as Sri Darbar Sahib or Golden Temple, (on account of its scenic beauty and golden coating for English speaking world), is named after Hari (God) the temple of God. The Sikhs all over the world, daily wish to pay visit to Sri Amritsar and to pay obeisance at Sri Harmandir Sahib in their Ardas (prayer).
It is a powerful monument of immense historical importance that represents the magnificence and strength of the Sikhs spread all over the world. The glorious temple is a living example of the spirit of Tolerance and acceptance that the Sikh philosophy propounds.
Brief History
Amritsar’s Golden temple is a shrine that is central to Sikh faith because during the turbulent course of Sikh history the town and the temple acquired a special significance. It is one of the few shrines actually built by the Gurus.
Guru Arjan Dev ji, the Fifth Nanak, conceived the idea of creating a central place of worship for the Sikhs and he himself designed the architecture of Sri Harmandir Sahib. Earlier the planning to excavate the holy tank (Amritsar or Amrit Sarovar) was chalked out by Guru Amardas Sahib, the Third Guru, but Guru Ramdas Sahib executed it under the supervision of Baba Budha ji.

The land for the site was acquired by the earlier Gurus on payment or free of cost from the Zamindars (landlords) of native villages. The plan to establish a town settlement was also made. Therefore, the construction work on the Sarovar (the tank) and the town started simultaneously in 1570. The work on both projects completed in 1577 A.D.
Guru Arjan Dev Ji got its foundation laid by a Muslim saint Hazrat Mian Mir ji of Lahore in December 1588. The construction work was directly supervised by Guru Arjan Sahib himself and he was assisted by the prominent Sikh personalities like Baba Budha ji, Bhai Gurdas ji, Bhai Sahlo ji and many other devoted Sikhs.
The Harimandir was destroyed by Afgan invaders thrice ( AD 1757,1762 and 1764) and finally rebuilt in its present shape and structure in the period of Sikh Misls (Confederacies) in AD 1764. After the conquest of Sirhind on January 1764 the Khalsa spread a sheet and collected offerings amounting to rupees nine lakhs. This time Sardar Jassaa Singh Ahluwalia laid the Foundation stone on AD 1764. With the sustained efforts of the Khalsa the construction of Amrit Sarovar, The Harimandir, the bridge and the Darshini Deorhi was completed by 1776.
The construction of Parikrama (circumambulatory) and the religious places around the tank were completed in 1784. 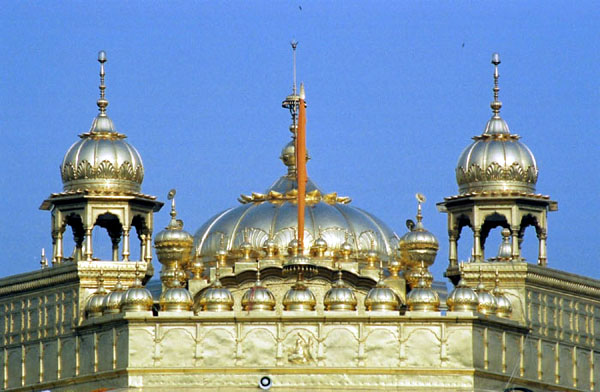 The Golden Temple, as is stands today with the luminous exterior plates with gold is chiefly the work of Maharaja Ranjeet Singh. He took deep interest in getting the Temple artistically decorated .He invited skilled architects, masons and wood carvers from different part of the country. Yar Mohammad Khan Mistri was the technical expert for gold plating carried out in 1830. The entire Gold leaf covering was changed in 2003, exactly 173 years after it was first put into place.

Architecture
Architecture of the Golden Temple Sri Harmandir Sahib is built on a 67ft. square platform in the centre of the Sarovar (tank). The temple itself is 40.5 ft. Square. It has a door each on the East, West, North and South. The Darshani Deori (an arch) stands at the shore end of the causeway. The doorframe of the arch is about 10ft in height and 8ft 6inches in breath. The door panes are decorated with artistic style. It opens on to the causeway or bridge that leads to the main building of Sri Harmandir Sahib. It is 202 feet in length and 21 feet in width.
The bridge is connected with the 13 feet wide 'Pardakshna' (circumambulatory path). It runs round the main shrine and it leads to the 'Har ki Paure' (steps of God). On the first floor of 'Har ki Paure', there is continuous reading of Guru Granth Sahib. The main structure of Sri Harmandir Sahib, functionally as well as technically is a three-storied one. The front, which faces the bridge, is decorated with repeated cusped arches and the roof of the first floor is at the height of the 26 feet and 9 inches. 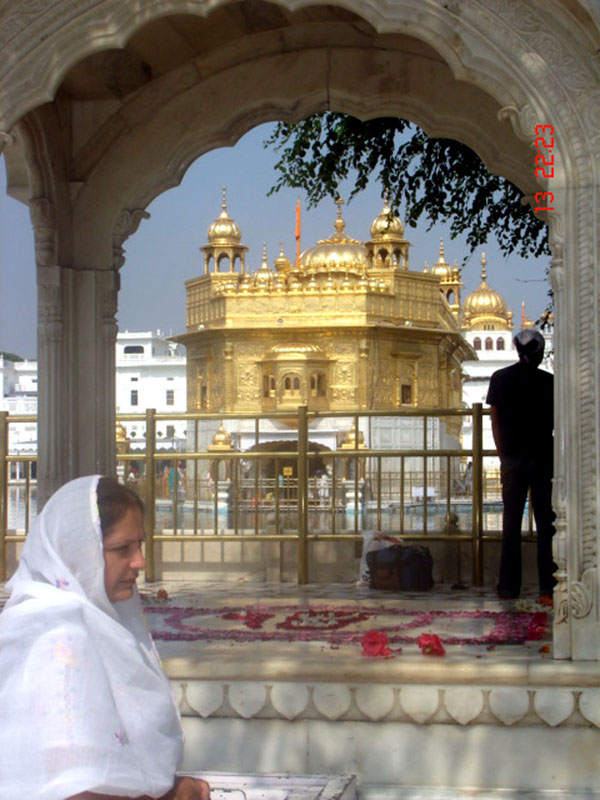 At the top of the first floor 4 feet high parapet rises on all the sides which has also four 'Mamtees' on the four corners and exactly on the top of the central hall of the main sanctuary rises the third story. It is a small square room and have three gates. A regular recitation of Guru Granth Sahib is also held there. On the top of this room stands the low fluted ‘Gumbaz’ (dome) having lotus petal motif in relief at the base inverted lotus at the top which supports the 'Kalash' having a beautiful 'Chhatri' at the end.
The idea behind the architecture of Golden Temple is that of Spiritual Enlightenment and the lotus is the symbol employed to express this idea. The lotus is a flower, which is repeatedly been linked to divinity in Hindu Myth and legend because the lotus has an almost universal symbolism of purity and beauty. Thus it is no coincident that lotus theme is so central to the concept of Golden temple.
Two Special Features
Instead of building the Harimandir on the higher level, as was the custom in traditional Hindu temple architecture, the guru built the Harimandir on a level lower than the surrounding ground. The visitor has to go down the steps in order to pay homage to the holy shrine. The other distinguishing feature of the structure of Harimandir is that, unlike the Hindu temples which usually have only one gate, the Harimandir was made open on all four sides signifying open entry to all without any distinction of Caste, Creed, sex and Religion.
Its architecture represents a unique harmony between the Muslims and the Hindus way of construction work and this is considered the best architectural specimens of the world. 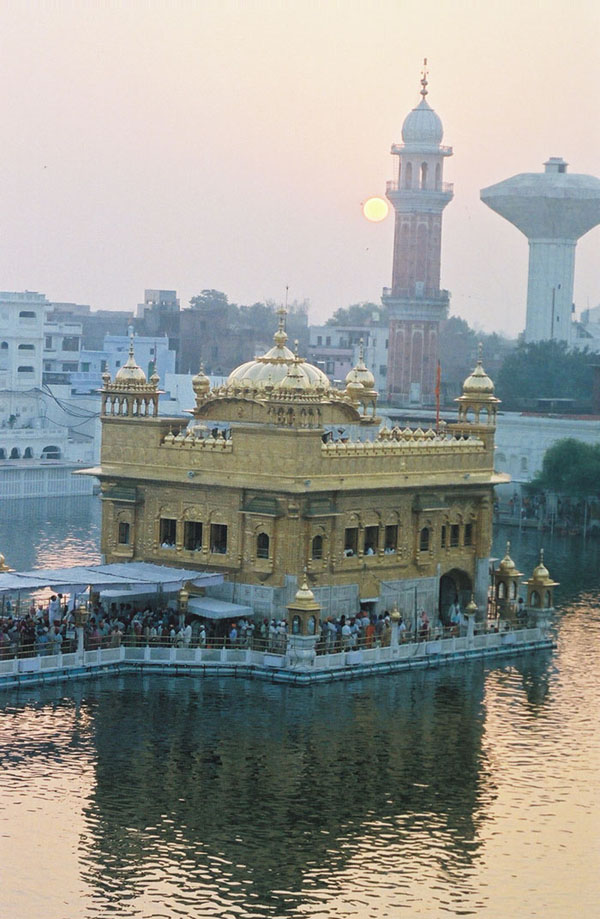 Morning
The Morning light falls like a Devine breath Upon the Golden temple. The waters of the Amrit sarovar are touched by the crisp wind into million ripples. To see the temple almost floating in the waters is to see the Devine beloved, a sight that reaches into the Soul and is never forgotten.
Much before this sight, one hears the loud prayers of the sevadars getting ready for the Prakash of the Sri Guru Granth Sahib Ji. Sri Guru Granth sahib Ji is carried in the magnificent Golden Paalaki. Raggis inside the Golden Temple sign hymns from the Guru Granth Sahib day and night.
Evening / Night
From the dawn to midnight the Shabad Kirtan is an unbroken chain of the Devine remembrance. It has been so for hundreds of years as the wind and the Beri trees and the water are all wrapped in the music that is The Word. There is no other prayer but to tune one’s soul to the word being sung by devotees who have come and gone and will keep coming in the future.
Sitting in the recesses of the Darbar Sahib itself, or in the parikrama area or in the rooms of the sarais around the temple the devotees hear the Word and are awaken to higher level of consciousness until they hear what is truly the final spiritual experience, the Anahad Shabad (the soundless Word).
All the time you are there, the sight of Temple is like the vision of a Devine Mansion, shining in the mist of morning, or disappearing in the twilight, that is truly unforgettable. Many a times in the Gurubani, there is such a Mansion of God where there is sacred music all the time and a great peace (So Dar Keha..)*

The real Golden temple is very much like a Mansion. The mystical experience is something that takes place in the innermost being but the outward view of the Temple is so perfect as an aesthetic statement that is it truly leads you from the outer to the inner experience. What you see is the preparation for what you will see and experience within yourself.
Every night Sohila which is a ‘Hymn of Praise’ and is the finale to the evening prayer. Sohila consists of five hymns. Third hymn is: Upon that cosmic plate of the sky, the Sun and the Moon are the lamps. The stars and their orbs are the studded pearls. The fragrance of the sandalwood in the air is the Temple incense and wind is the fan. All the plants of the world are alter flowers in the offering to you, O Luminous Lord.
What a beautiful Aarti (a lamp lit worship service) O ! Destroyer of Fear. After the Ardas Sri Guru Granth Sahib ji is carried to rest in a room in the temple complex some distance away from the Harimandir.
Ath-Sath Teerath 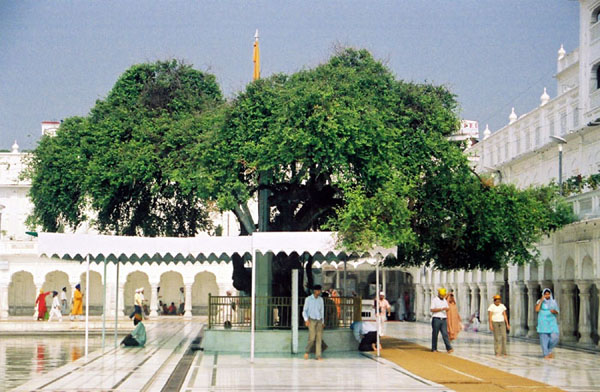 Facing the Hari-ki-Pauri in the East across the Amrit sarovar is the wonderful Ath-Sath Teerath, a marble seat covered with a light canopy roof, the place where Guru Arjan Dev ji used to sit and supervise the construction work. To be able to come to Ath-sath Teerath and touch it with your finger is a blessing sought by devotees.
The Beri Baba Buddha Ji near the main entrance of the complex, It is said the Baba Buddha ji, the first Granthi of the Harimandir Sahib, used to sit under this Beri (Jujube) tree and supervise the construction work of the Tank and the Harimandir.
Akal Takhat 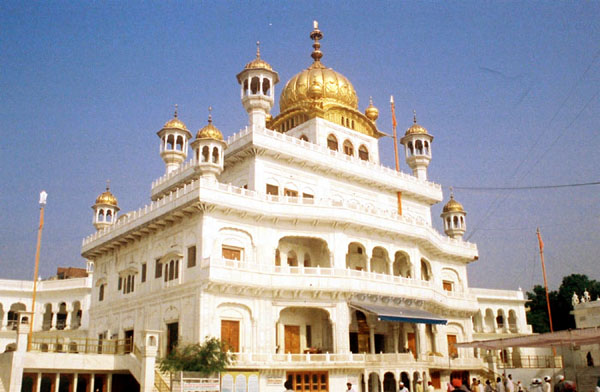 It rightly faces the Golden Temple. Built by the Sixth Guru Hargobind in 1609, has been the nerve centre or the Sikhism ever since. All commandments affecting the community as a whole were and are issued from here. The ground floor of the present building was constructed in 1874. Maharaja Ranjit Singh subsequently added three storeys. A number of weapons used by Guru Hargobind, Guru Gobind Singh and other Sikh heroes are preserved at Akal Takhat.
A visit to the Sri Harimandir Sahib happens when He makes it happen. With a wish to see it one more time, I returned. My impression can be summed up in one line of Sri Guru Arjan Dev ji,
Dithe Sab Thaon
Nahi Tudh Jeha
(I have seen all places , there is not another place like thee… )