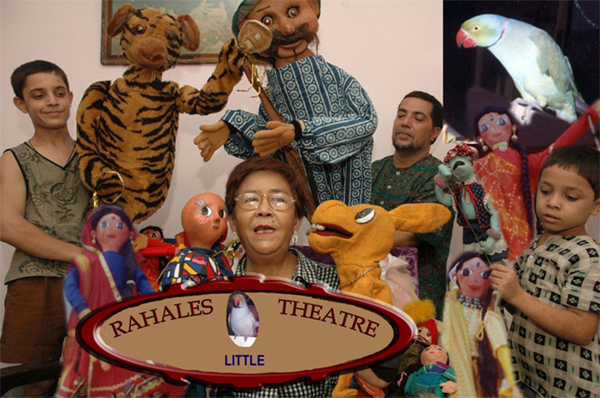 "Talent is a gift from God. What I do with that talent is my gift to Him." This is a Chinese proverb oft quoted by Rachael MacBean, who has made her talent for puppetry a medium of communication, entertainment, education and therapy over the last 26 years, bringing about the social empowerment of her group of performers at the same time.

"The untimely passing away of my husband in 1984 had left a void in my life, and then, a chance venture of putting up a puppet show for an office party, revealed the therapeutic nature of puppetry to me," says MacBean, 66, who is based out of Joka in Kolkata.

MacBean started off with designing and making her own puppets from a variety of materials and then began training others, mostly women, in the art form. "The emphasis was not on watching or creating something that can give a message, but rather on being able to transform learning (in a broad and fulfilling manner) on all levels through the arts - puppetry being one of the most comprehensive art forms, which embraces skills such as music, dance, drama, art and inter-dependence," she says.

The Rahales Little Theatre (RLT), MacBean's group, was set up 25 years ago, and she along with her over 400 puppets - each with a special name - and dedicated team members started on a long and fulfilling journey to discover a new world through C.E.E.T - communication, entertainment, education and therapy.

"Puppetry for us is not child's play, but a very serious venture," says Uttara Ghoroi, 30, from Medinipore. She was trained in puppet animation by MacBean and performs with the RLT on a regular basis now. "Traditionally, only men handled the 'beni putuls' (glove puppets) in our village. I was just a poor housewife, but Rachael madam taught me and gave me the confidence. I am illiterate but with my puppets I can create an awareness on many issues like HIV/AIDS or the importance of education, and even bring people out of a depression by cracking jokes," says Uttara, who now travels the length and breadth of the country for puppet shows.

"Uttara's adaptability itself is an example of the benefits of puppetry. She overcame her shyness even as her nimble fingers made her puppets dance to her songs and act out her dialogues on stage. She now confidently participates in the activity of the entire mixed group," points out MacBean.

The RLT has custom-designed programmes, workshops, teacher training modules, awareness programmes on a variety of issues and also therapeutic plays and shows for both adults and children, where puppets become a medium of creative communication and divergent thinking. From schools to hospitals, special care centres, corporate houses, universities, rural road shows, street corner performances, the group stages puppetry programmes across India and abroad.

"We use the puppets to make teaching interesting for adults as well as children. For example, in speech therapy and creating language fluency," says Ganesh Ghoroi, 37, who is the master puppeteer of the RLT team. "Joining Rachael madam brought a sea change to my thought process. I am a traditional 'beni putul' puppeteer from Medinipore, but she taught me skills which made my art form more contemporary," he adds.

Besides his own glove puppets, Ganesh now also handles rod puppets and string puppets and, with guidance from MacBean, he has learnt to think beyond the mindset of a traditional artiste and develop the ability to present any kind of programme on socially relevant, contemporary issues. "Since our shows are often interactive, I have also learnt to overcome cultural and language barriers, despite being illiterate, to interact with my audience," he says. Today, Ganesh also heads his own puppetry group called 'Hariya Java Beni Putul Nach' (The Lost Glove Puppet Dance).

The biggest change for him has been social. In his village in Medinipore, traditionally only men were allowed to handle the glove puppets. "But after some shows with us, Ganesh gained the confidence to allow his wife Uttara to train with us, too. The women in their village were only allowed to stitch clothes for the puppets. But Ganesh himself taught Uttara puppet animation in our workshops," says MacBean. When Ganesh got the opportunity to present a traditional show at the National Festival (Putul Yatra)in Jaipur, Rajasthan, under the aegis of Sangeet Natak Akademi, Uttara shared stage space with him.

Unlike the traditional 'Beni Putul' puppeteers, who only carve the puppets in a stylised manner and give them to another artiste to paint, Ganesh and Uttara, under MacBean's tutelage, learnt to design and create their own puppets, paint them and dress them using myriad materials to suit the character and role. They also design sets for live as well as TV puppet shows for the RLT.

Today, Ganesh and Uttara contribute their skills in animating different categories of puppets: rod puppets, string puppets, muppets, costumed human puppets as well as workshop puppets - that are used in workshops held for teachers/students of international and English medium schools, as well as those for children with special needs. They compose original scripts and songs for the shows and workshop.

"They lived below the poverty line, they are illiterate but now they can perform in different languages with their puppets. They can communicate through original dialogues and scripts on different social issues. This is the learning and skill development agenda for the under privileged sections that I have created under C.E.E.T," explains MacBean. She points out that even now finances are tough - they are paid based on the budget for each project that RLT gets. But, as MacBean puts it, "Puppetry has definitely helped them to evolve their abilities, given them self-confidence and dignity."

Shaista Parveen, 20, has also been training with RLT for about 10 years, and makes puppet accessories, costumes, jewellery, being skilled in needlework, embroidery, knitting and jewellery designing. Says she, "All these are saleable skills and I have the confidence that I can earn a living anywhere now."

Not just adults, several youngsters are also involved in RLT, like Mohammed Azimussan, 16, Mohammed Hassan, 12, and Suchandra Mullick, 13. "All of us come from villages in the South 24 Parganas district and our families are very poor. We come here to learn skills such as dancing, acting and story-telling through puppets," says Suchandra, who belongs to an OBC family. Adds Azimussan, "I am learning technical management here. The focus is on producing shows - live or recorded. I am gaining experience in sound production, lighting and set designing." Then there is Shraboni, 13, who is already a trained puppet animator – she has been training with RLT from the age of 10 – and does story-telling using puppets during all RLT shows.

Others like the husband-wife duo of Susama and Sunil Adak and their daughter Moumita, 20, have been performers with RLT with years of experience. Sunil is a trained ventriloquist. They conceive and implement projects related to awareness campaigns like polio eradication, HIV/AIDS, sanitation, hygiene, reduction of school drop out rates and adult education.

"The going has been very tough, offset by disappointments, rejections and financial problems, but we have persevered. We have shown the world that a traditional art form can be adapted successfully. A puppet is your soul in the palm of your hand," says MacBean.

Her firm belief in an ancient African proverb makes her continue this journey - "If you can speak, you can sing/If you can walk, you can dance". Nothing is impossible if you set your heart on doing it.