Storm in a Tea Cup 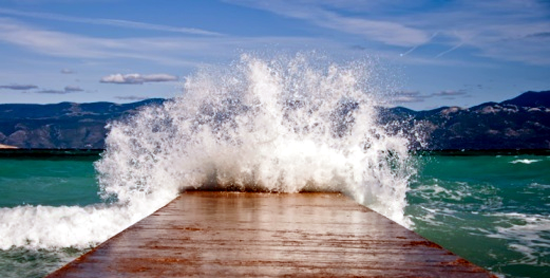 The British began using this idiom around AD 1520 or so. It is used to denote exaggeration. For example, if someone exaggerates a problem or makes a problem seem far greater than it really is, then he is making a storm in a tea cup. Akin to make a mountain of a molehill. But literally if you drop a sugar cube in a cup filled up to the brim with hot tea, part of the tea will certainly spill over and briefly you can watch the waves hit the brim. Also in the process some of tea leaves which were at the bottom of the cup would either spill out of the cup or float at the top.

Imagine our oceans to be a large tea cup with lots of material like sediments brought continuously by the rivers, dead bodies of organisms and even sunken ships like the tea leaves you had in your cup! Like a sugar cube may be large enough to raise a storm in the cup, rather giant sized waves are required to stir the ocean bottoms. For example, an earthquake of magnitude 8 and above can make either lots of material slip in to the depths of the sea or may rupture a part of the sea bed so that water gushes in. Often the sea floor gets raised by the earthquake waves displacing a huge quantity of water in the process. All such happenings lead to giant waves called Tsunamis (Read: When death danced on the sea coast).

The earthquake of 9.3 magnitude which rocked the sea floor off shore on the west coast of Sumatra on 26th January, 2004 will go down the history as the fifth largest earthquake in the past four decades. This earthquake created a tsunami which affected an area of nearly 2260 km of Andhra Pradesh, Tamil Nadu, Puduchery and Kerala in India. Nagapattinam in Tamil Nadu was the worst affected, where 6051 people were deluged and lost their lives.

Sea waves in normal course dump lot of material ashore. However, normal waves are not powerful enough to scoop out the material lying at the base and bring it on shore. The tsunami waves on the other hand, though hardly decipherable at the surface have long wave length and are powerful enough to scoop the sea bottom and dump the material ashore. What such waves can do has already been written in the past-read ‘Echoes of tsunamis from the earth’s history, boloji.com, 3 Mar 2007’.

In countries like Australia where tsunamis have been frequent lot of research has been carried out on the nature and power of tsunamis. For the Indian geoscientists the January 2004 tsunami was the deadliest tsunami in the history. Therefore a study of sediments brought ashore by the tsunami waves is of significance. C.H. Sujatha, N.Aneeskumar and K.R. Renjith of Department of Chemical Oceanography, Cochin University of Science and Technology, Cochin is of significance.

The coastal sediments are dumped on the coasts by the sea waves from the shallow parts of the continental shelf. These sediments reach the shelf area via the rivers which transport them long distances from the point they originated.

Marine sediments fringing the coast of India exhibit well-defined patterns in their texture, chemical and mineral composition. Recently R.Alagarsamy and J. Zhang of National Institute of Oceanography, Donapaula, Goa, India and State Key Laboratory of Estuarine and Coastal Research, East China Normal University, Shanghai, China studied the surface sediments from the Indian Continental Shelf offshore from the mouths of the major rivers Brahmaputra, Ganges, Narmada, Tapti and Godavari, Krishna and Cauvery on the east and the west coast. Using the state of the art Inductively Coupled Plasma Atomic Emission Spectroscopy (ICP-AES) they were able to establish that metal content of the sediments was much higher close to major urban areas in the east and west coast. This is due to industrial activities in these areas, they report.

This report in other words forms a sort of a baseline data for the chemical characters and quantities of expected major and trace elements in the coastal sediments. However the study by Sujatha and her colleagues tells a different story, especially about Nagapattinam a known non-industrial area in Tamilnadu. They earmarked four sites reflecting the variability in the effect of the tsunami. These sites were parallel to the coast of Nagapattinam that is Nagapattinam Beach, Tarangambadi Temple (the temple was completely destroyed by the tsunami), Tarangambadi Beach and the ancient Danish Fort (AD 1629), Tranquebar.

The tsunami waves when they hit the beach are like a tiger unshackled or unleashed. They are released from the confines of the water column above and below and hit the beach with the force of a Boeing Jet Liner. Once their energy is dissipated they offload the sediments they are carrying. Thus it was found by Sujatha et al that most of the sediments were deposited in thicknesses varying from 1 to 90 cm at an average distance of 0.2 km from the coast. These sediments contained an appreciable amount of clay as well. It should be remembered that in a sea the area which is least disturbed by waves is rich in clay. The coasts are always leashed by the waves. Thus sudden appearance of clay-rich sediments in a regular pattern itself is an indicator of their extraneous origin!

Sujatha and her co-workers report that trace metals like Chromium, Nickel, Zinc, Lead, Copper and Cadmium and phosphate, orthophosphate and exchangeable Nitrogen showed a quantum jump over the known quantities of these elements under normal conditions. It is interesting to note that samples from Tarangambadi temple, Tarangambadi beach and Nagapattinam beach showed very high values of Chromium. Similarly a high value of Nickel was found at Nagapattinam beach. The samples from the Danish Fort area however, showed a lower concentration of these elements. Is it a coincidence that the waves were angrier at Tarangambadi and Nagapattinam, than at Danish Fort!

However, these researchers have valid reasons to believe that the higher values of Chromium and Nickel may be due to domestic and sewage waste being dumped in the sea in those areas. Due to churning of the sea bottom by tsunami waves, the trace metal enriched waste reached the coast. The quantities in which these metals are present on the beach and coast are harmful for the biota of the shallow zones of the sea. Nagapattinam is a fishermen’s treasure trove and the pollutants can certainly affect the fishing trade.

Tsunami can neither be predicted (easily), nor wished away if it comes; but management of domestic and industrial waste can certainly be carried out so that the ocean waters remain free of impurities injurious to the fauna.