Mahmud Ghaznavi says Wikipedia was the most prominent ruler from the Ghaznavid dynasty and ruled from 997 until his death in 1030. Making Ghazni (now in Afghanistan) as his capital and captured vast areas till Somnath in Gujarat, Meerut and Kannauj in Uttar Pradesh.

Mahmud Ghaznavi desperately needed money to wage his wars against Indian kings and chieftains. He was plundering temples and robbing them of their jewels. Around that time part of Yamuna valley was plundered by a major earthquake say D.D. Joshi, Biju John, G.C. Kandpal and Prabhas Pande of Geological Survey of India in Journal of South Asia Disaster Studies.

Yes, Joshi and his colleagues found certain evidences which made them conjecture about a major earthquake that hit the area of the foothills bordering Himachal Pradesh and Uttarakhand. Since the area is fast developing and there has been no major seismic activity in this area for past few centuries, the find of Joshi et al becomes interesting and significant for the society.

The evidences they found are in the form of paleoliquefaction structures. Before trying to ponder over the find of these seismologists, it is time to understand what liquefaction is and what it can lead to? Liquefaction is a phenomenon which causes soil to lose its strength and as such the soil is not able to maintain its form. It turns in to a liquid in response to the stress it has undergone.

This story would not have been written if the Indian plate and the Asian plate had not collided some 20 million years ago! The Indian plate is since then continuously pushing under the Asian plate. The collision created the Himalayas. The rise of Himalayas created a new drainage system in the region and the rivers thus originating from the Himalayas started to drain southwards. They meticulously deposited the sand and silt brought by them by eroding the Himalayas on the plains year after year. The process continues…The subsurface sands of the Indo-Gangetic plains are a giant vault of ground water.

Subsurface soils saturated with water tend to lose their strength in front of intense stresses generated by an earthquake and begin to flow like water. Imagine if the sand which hosts the foundation of your multistoried building turns in to a liquid! The outcome would be disastrous. Such disasters have been happening since ages. Now with skyscrapers being in vogue the risk of liquefaction becomes all the more intense.

The liquefied sand is actually under great pressure. Imagine a balloon filled with a mixture of sand and water. If you press the balloon and prick it with a needle a jet of liquid sand will emerge. If the pressure in increased the jet will flow out with greater force.

A feature somewhat similar to what has been described in the preceding was noticed by Joshi and his colleagues. The liquefied sand was under such great pressure that it traveled for a distance of three meters. The composition of this sand is akin to the sand layer at the base of the sequence. Being coarser than the layers of sand above, it is easily distinguishable. The column of sand that cuts across the strata is about ten centimeter wide at the base and tapers to about five centimeter at the top. Such columns are termed as dykes. Since it is constituted of sand it is termed as sand dyke. Strangely there is not one but many closely spaced large and small dykes this sequence of sediments.

While the river was depositing layers of sediments year after year, different types of layers were laid. Some were more compact with more tensile strength. These clays acted as a barrier for the jet of liquefied sand. At such spots the sand under pressure instead of cutting across sought easier passage along the layers of sediments. They are now preserved as what geologists term as sills. The liquefied sand jet is empowered by the magnitude of the earthquake. A dyke loosing the power and becoming a sill means dissipating energy of flow of liquefied material. A word of caution here however, is that the soft sediments are prone to deformation of this type due to several factors and earthquake is one of them. 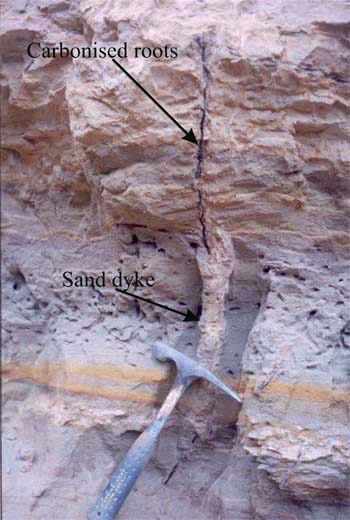 The presence of sand dykes in the terrace of Yamuna has all the circumstantial evidence to indicate that they have been formed as a result of an earthquake. But the question remains, when the earthquake occurred?  Quoting Westnouskey et al, Joshi and his colleagues say, ‘The vertical uplift rate in this part of Himalaya is estimated as 6.9 plus minus 1.8 mm/year. Therefore, considering an uplift rate of about 7 mm/year the approximate age of the terrace may be around 15000 years Before Present (BP)’. Obviously the earthquake which created the sand dykes from the material of the terrace must have occurred after the terrace had been formed.

The only dateable material present in the dykes were the carbonized roots. These were the only dateable material. Their age given by C14 dating was 800 plus minus 130 years BP. But since this evidence was not very clinching evidence, Joshi and his colleagues state that ‘due to lack of conclusive evidence we consider the age of the dykes as 800 plus minus years BP. The evidences for paleoearthquakes in this region are rare, hence the singular evidence of this dyke has been considered as significant. Taking cue from several workers across the globe, Joshi et al postulate that to cause a dyke like the one they found an earthquake of magnitude greater than 7.0 would be required.

This occurrence is very close to a peculiar type of fault in the Yamuna Valley. Or rather say the Yamuna flows through a fault. Normally when a layer of strata moves up or down along a plane is said to be faulted. But here Yamuna passes through a fault which is as if the strata were torn like you rip an aluminum sheet! Such types of faults are not created by normal processes. They are caused by massive stresses mostly accompanying an earthquake. The earthquake that shook the region could have been created by this tear fault which finally caused liquefaction.

Earthquakes are impossible to predict, as the secrets of the subsurface are difficult to postulate. From the archeological finds of the region it is apparent that no major earthquake had occurred in this part of the Himalaya in the past 1000 years. The find of Joshi et al becomes significant as it shows that an earthquake of magnitude more than 7.5 had occurred in the vicinity of the Himalayas in the past 15000 years (the age of the Yamuna terrace!). 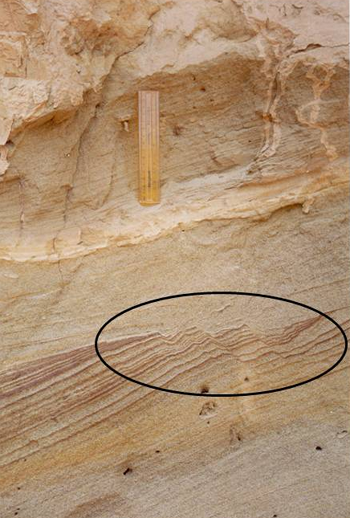 From their study these researchers conclude that at least one major earthquake occurred in this region during the late Holocene, which is the later part of last 10000 years. To narrow the gap further they have taken evidence available for the presence of water saturated sand in the area between 1300 and 800 years. The age of the dykes being 800 years BP, the earthquake could be older than that.

The evidences as of now are vague. But since this part of the Himalayan belt has not been visited by a major earthquake in the past 1000 years, the very presence if apparently insignificant sand dyke calls for a thorough probe including paleoseismological and archeoseismological studies.

Earthquakes can not be wished away. But considering the rapid growth in this region covered by Himachal Pradesh and newly emerging Uttarakhand a major earthquake could create havoc. The population density of the region has increased in leaps and bounds in past one decade. An earthquake would mean a major disaster. It would be better if the state governments start disaster management training programmes and also take measure to ensure that only earthquake resistant houses are permitted to be constructed. Schools and hospitals would need the special attention of the Governments-as congregation of people is always more at these places.

Images:
Sand dyke with carbonized root in Yamuna terrace.
Did an earthquake disturb the tranquility of these sediment layers?