The Alekh Cult: A Religion of the Masses 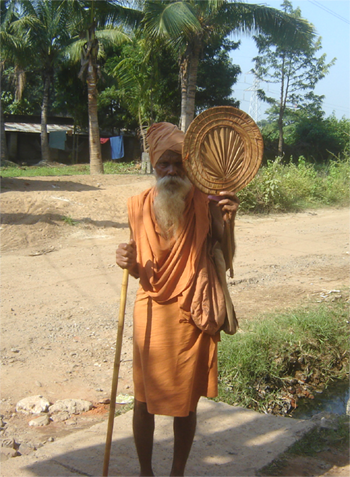 The Alekh cult which is also known as Mahima Dharma (Religion of Glory) is fast acquiring the character of a religion in certain parts of central India drawing followers from the masses and as well as from the elite groups. It is said to have been originated in the later half of the 19th century from Mahima Gosain (the glorious saint) who lived in the Kapilas Hill located in the erstwhile feudatory state of Dhenkanal in Orissa. Like all other religious reform movements of the time, it emerged as a protest movement against the evils of Brahmanism. Some of the religious and philosophical tenets of Advaita Vedanta, Buddhism and Jainism were woven into the cult which gained popularity among the depressed sections of the society. The cult was based on condemnation of all religious customs and manners of the well off sections of the society. The converts to this cult numbered around 20 to 30 thousand in 1867 and their strength went on increasing further in course of time.

A number of saints and ascetics have contributed to the growth, development and propagation of the cult as a result of which it has numerous followers not only in the states of Orissa, Chhatisgarh, Jharkhand, Bihar and West Bengal in India but also in some European countries. From a folk cult of the tribal and down trodden people of the feudatory states of Orissa, it has developed into a broad based religion with devotees spread far and wide.

Certain myths and beliefs are associated with Mahima Gosain, the originator and his immediate follower Bhima Bhoi. The devotees attribute a good number of compliments to Mahima Gosain. He is variously known as the Lord of Glory, The Indescribable Master (Alekh Swami), the Indescribable nude saint (Alekh Abadhut) and the Great Master etc. Local traditions relate to him as a saint, who wallowed in dust, who did not take any food for 12 years while meditating on the hill-top, and then he lived on fruits for another 12 years and on milk for a further period of 12 years. He is said to have directly descended from the space and was never born unlike a human being. He is said to have started his meditation on the Himalayas before coming to Orissa.

Bhima Bhoi who belonged to Khond tribe was his ardent follower. His devotional songs are popular   not only with the followers of the religion but also with other people. He is also regarded as the saint poet and has a place among the notable Oriya poets. His works bring out the essence of his religious belief and guide the devotees in their path of meditation. A few are of the opinion that in 1875 A.D. Bhima Bhoi by a gift of divine grace himself proclaimed the novel injunctions of Mahima Dharma. He is said to have hailed from a small village Gramadiha in Rairakhol feudatory state. He took a Brahmin wife and had some children. He lived a major part of his life in the village Khaliapali in the princely state of Sonepur till his death. At present the devotees have built a beautiful temple in the village dedicated to his memory.

It is regarded as a non-ritualistic religion unlike the Brahminism. It despises idol worship and is said to have been based on “Visuddha advait Darshan” (pure non-dualistic philosophy). It is against the otherworldliness propagated by the Vedic Religion. The supreme Master, according to the followers, is without attributes, color, shape, destruction, beginning or end. He is identical with the void. In their temples there is no idol and there is an opening at the top on which the devotees have to focus their attention. Love for fellow beings and non-violence is the mainstay of the religion.

The cult has two kinds of followers, the monks and the house-holders. It is also known as Kumbhipatia religion .The founder of the religion created the first order of ninety-two monks and gave them to wear the bark of a tree known as Kumbhi. The second order of monks who wore the bark of the tree numbered more than a hundred. Subsequently, another order of monks who wore a small piece of saffron cloth at the waist (kaupini) was also admitted to the cult. As a result, depending on the type of apparel used by the monks, there are two distinct groups. The status of the monk wearing the bark of the tree is considered superior to that of the other group. They roam about the villages to propagate their religion among the house-holders. They do not believe in the Indian caste system and accept food from all. They, how ever, refrain from taking food from a king, a Brahmin-priest, barber, fallen women and a washer man. For them, the king stands for oppression, the Brahmin is the king’s associate and an idolater, and the washer man, barber and prostitutes partake of the sins of all. The followers of the religion get up early in the morning before the sun- rise and pray to the rising sun. They wear clothes of saffron color; fall flat on the ground, keeping their head straight towards the rising sun and stand up with folded hands looking at the sun repeatedly for sometime. They repeat the same practice in the afternoon praying before the setting sun. They do not take any food at night.

The Mahima Gadi (exalted sacred abode) may be regarded as the central place of the followers of the religion. It is located in Joranda in the district of Angul in Orissa. The sacredness of the place lies in the fact that Mhaima Gosain left for his heavenly abode while in meditation in 1876 at this place. No body could trace his mortal frame as he was believed to have been directly merged with the void. It is said that the then ruling British authorities under the orders of Queen Victoria excavated the place to find out his mortal remains but failed to get any trace of them. The efforts to build a temple and a memorial ashram were initiated by the ascetics and monks from 1876. At present the Mahima Gadi Dham is located in a sprawling campus of nearly 80 acres of land. The Mahima Gadi temple, the open temple (the temple with a void at the top), the temple for fire worship and the ashram are situated at this site and a large number of pilgrims flock the campus everyday to have a darshan and worship the fire that is kept permanently ablaze. The different orders of ascetics, monks and the followers reside in the ashram and maintain the daily routine of worship. The Mahima shrines are four in number known as Gadi Mandir,Dhuni Mandir, Akhandbati Mandir and Ghanta Mandir. Women followers are not allowed to reside in the campus but they can take part in the worship and pay their holy visits to the site.

The Magha Mela is celebrated every year on the full moon day in the month of Magha according to the Oriya calendar (between January and February). Devotees of the various sects of the cult offer mass prayer at the fair in Joranda. It is meant for commemorating the day on which Mahima Gosain, the godhead of the religion, attained salvation. Thousands of monks and devotees throng the place and at present the state government and the devotees are all set to host the grand occasion that will start from February16, 2011. Thousands of sadhus, sanyasins and devotees of both the sects such as the Kaupinidahri (wearing loin clothes) and the Bakaldhari (wearing the bark of tree) have been reaching Joranda to offer their prayer for world peace. The devotees pour tones of pure ghee on the sacred fire chanting “Brahma Alekh” or “Mahima Alekh”.  The Fair reflects the ideals of Mahima Gosain who envisioned a classless society free from exploitation of the weak and poor by the feudal ruling chiefs and the landed gentry. His efforts also aimed at opposing the idea of large-scale conversion of Hindus to Christianity during the British rule in India.

At the moment, Joranda, formerly a nondescript village in central Orissa, reverberates the message of love and universal brotherhood of Mahima Gosain. More and more people across the country and the globe are drawn to the cult which believes in simple living, love and compassion for the living beings and communal worship for world peace.