The Indus has Done it in the Past Too 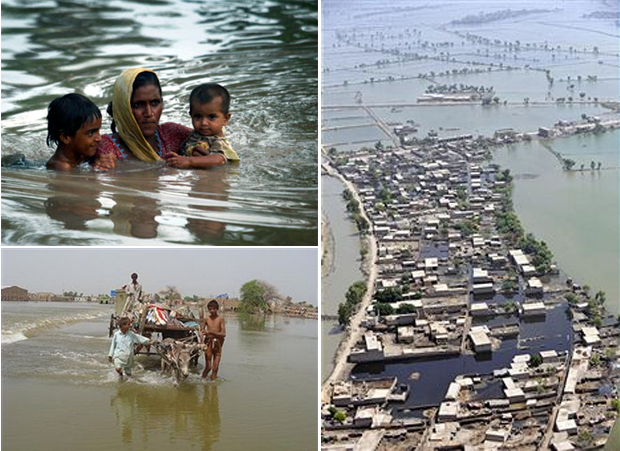 Indus valley, the cradle of 5000 year old civilization of Mohenjo-darohas seen many ups and downs. Located in Larkana district of Sindh province of Pakistan, Mohenjo-daro was a flourishing town on the bank of the Indus River, built before 2600 BCE, says theWikipedia. What intrigues is the fact that this township was abandoned around 1500 BCE. There must have been very compelling reasons to abandon such a city! Today, can we think of abandoning Delhi or for that matter even Karachi? Not under the normal circumstances. A major earthquake, floods or an epidemic - these are the only factors which could have affected a well populated town in the days of yore. Nuclear radiation can be safely ruled out as the ancestors living there had not yet developed a scientific thought.

Earthquake of a magnitude to wipe off a population of a town like Mohenjo-darowould certainly have left trails. But no such trails have been found till date from the town whose name Mohenjo-daro when translated into English means a ‘Mound of the dead’. Since its discovery in 1922 Mohenjo-daro has been visited by several archeologists, historians and earth scientists. All of them have almost a common opinion that the town was ruined when at its zenith somewhere around 2500 B.C. by floods.

Quoting exhaustively from the works of Raikes and Dales, historians and Dr. M.R. Sahni of Geological Surveyof India, H.T. Lambrick a famous historian with a number of publications on Sindh postulates that sudden decline and extinction of prehistoric Mohenjo-daro was due an avulsion by the Indus River. Lambrick published his conclusions in 1967. He refuted the claim of Dr. M.R. Sahni by stating, ‘I have to confess that I did not notice the snail shells here ports’. It must be mentioned here that Dr Sahni postulated submergence of the township due to blockade of the Indus River as a part of the ground on the downstream had been raised due to an earthquake…About the clays with snail shells which occurred atop a hill, Lambrick says, ‘…it was the debris of man-made mud-brick buildings, very probably Budhist, perhaps a stupa, the disintegration of which over twelve or more centuries ago might have been assisted by the iconoclastic zeal of Muslims…Thus there are strong grounds for doubting whether the earth on this particular hill represents a natural deposit of alluvium; and before we can accept that explanation of its presence, we should wish to have supporting evidence of similar strata of silt at corresponding levels on other hills in the neighborhood. It would be strange if postulated exceptionally high flood left such in traces only one place’.

It is amazing to note that a similar avulsion has been postulated by Prof Rajiv Sinha of IIT, Kanpur after the floods of 2010.  August 2010 will go down in the history of Pakistan as one of the disastrous months. Fourteen million people were displaced by what the BBC had termed as the biblical floods of the Indus. Prof Rajiv Sinha of IIT Kanpur says that the Indus floods in Pakistan have been so devastating that the policy makers should rethink about the strategies of river management.

The month ofAugust it seems spells doom for the alluvial areas falling within the regime of Ganga in India and Indus in Pakistan. Both the rivers pass through densely populated areas. Both the areas have agriculture as mainstay of economy. In August 2008 the Kosi, a major tributary of Ganga in Bihar suddenly jumped its course and went back to its more than 100 year old course, some 120 km away. The channel of the new course which the river occupied did not have the capacity to haul the volume of water and sediments which the Kosi contained and the result was a vast flood.

Somewhat similar phenomenon was displayed by the Indus in 2010 floods. Following a heavy rainfall in the catchments Indus flooded nearly one fifth of total area of Pakistan. The floods affected nearly 20 million people and nearly 2000 people perished. The loss in terms of money is tremendous.

1.  Excessive rainfall and overbank flooding.
2.  Breach of embankment and inundation.
3.  Avulsion (rapid shifting) of rivers and
4.  Unplanned releases from barrages.

The science of climate having grown in leaps and bounds, predicting floods due to excessive rains is not difficult. Generally the population likely to be affected is informed well in advance and shifted to safer areas. But when such floods take place due to cloudbursts the advance warning is not there. That is what happened in case of Indus this time. There was a heavy rainfall in the catchments and some of the areas like Risalpur, Cherat, Saidu Sharif, Peshawar, Mianwali and Kohat had as much as 415, 372, 338, 333, 271 and 262 mm rain respectively between 27 and 30 July 2010.

Rivers flowing through densely populated areas are now as of need of the time are jacketed. Initially the population is not discouraged from settling down on the riverbanks. Later in order to protect the habitats bunds are erected on both banks of the river. This is a common practice in all the towns of Indo-Gangetic alluvium, irrespective of their countries.

Apparently a river is not able to cross the barriers of the bund and the habitats remain protected. Had these bunds not been there the river would have flooded the area, particularly the area falling in its flood pathway. In the process the river would have also dumped its extra load of sediments on both the banks. But our need for land is acute, hence that cannot be disallowed. However, the nature’s processes must go on and the river leaves its excess load in its channel within the confines of the jacket and moves ahead. The sediment loaded stream becomes sluggish. A sudden downpour causes lot more water to reach the channel of the river and in its fury; the river floods the area whereever it finds a way out. At times the river even breaks the bund and sheet of water comes out from the passage thus created.

Avulsions by the Indus sometimes in 1500 B.C lead to abandonment of the prosperous Mohenjo-daro. It was a signal for the downfall of the Indus Valley Civilization. People of those days did not have the expertise of engineering and science. Yet their structures in general remained safe from the vagaries of nature for thousands of years.

Now despite armed with the latest technologies we take floods as a nature’s curse and take it as our fate. Isn’t it a shame? Rajiv Sinha has rightly suggested that instead of going for ‘river control’ we should go for ‘river management’. The hundreds of kilometers of bunds constructed along the banks of Indian rivers required billions of rupees annually to maintain them. Yet the poor people of the banks of the river suffer every year. The governments must realise the fact that despite more than a century of harnessing the Himalayan Rivers the problem of floods has continued to plague the masses. It is time to understand the rivers, their sediment carrying capacity, development of their catchments and micro-catchments, aforestation of areas to check the soil erosion etc are the need of the day.

Rajiv Sinha in his paper strongly advocates the need of preparing basin scale flood risk maps based on scientific data and reasoning. Such maps could utilize the historical data and develop interactive maps so that the experts could predict the floods better and save masses from tragedies.

Kosi and Indus are two glaring examples in front of us. These two rivers have a history of inundating vast areas and still we are waiting for them to cause havoc again and again. Mere engineering structures cannot harness these mighty rivers. Their floods since times immemorial suggest ‘let us develop their flood plains in harmony with nature.’