The first images that come to mind about Cities are the bustling streets filled with huge population of people, cars and a fast paced life. But for Africa’s leading naturalist Tomas Diagne growing up in Sengeal, Urban life in Senegal had a complete new meaning. As a young boy, Diagne remembers waking up early each morning just to listen to the chirping of the birds in his local park before going to school.  During the holidays he would visit his father’s farm 35 kms northeast of Daker in Sangalkam, exploring the nearby bushes and gleefully bringing back snakes and other creature to the house to study them.

Diagne recalls his father being far from enthusiastic and rightfully given that he was neglecting his studies and turning the house into a zoo with the animals making a mess everywhere. However, his childhood passion for animals took a new direction when Diagne came across some African spurred tortoises also known as Geochelone Sulcata, the largest mainland tortoise and the third largest in the world. 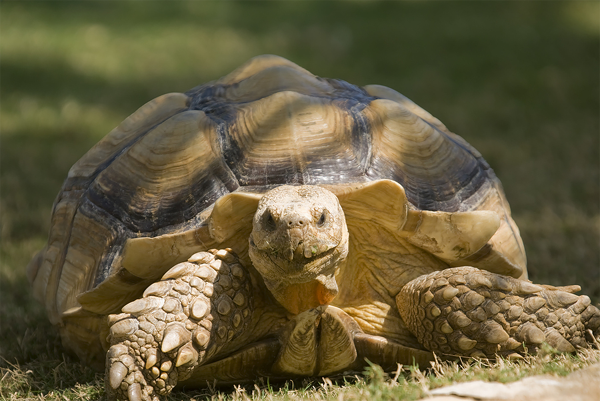 Diagne extensively researched on the African spurred tortoises including an article by noted French tortoise specialist Bernard Devaux to whom he later sent a few photographs of the tortoises. Devaux’s response on the particular species being endangered set Diagne on a path of wildlife conservation to protect these magnificent tortoises from extinction.

In 1992, Diagne decided to use his father’s farm in Sangalkam to set up a sulcata sanctuary with only three tortoises. He modeled it after Devaux’s Village des Tortues (Village of Tortoise) in Southern France. It was a small beginning to what has now grown into a larger initiative in saving the African spurred tortoises. The following year, Devaux encouraged Diagne to take another step forward by collecting and breeding tortoises at Sangalkam under project S.O.S. Sulcata. The effective publicity to create public awareness with radio broadcasts made it a success and getting the Senegalese Government to agree to send tortoises seized and repatriated by European customs to Sangalkam.  In 1997, Diagne opened the farm to the general public and the response was phenomenal which led to a search for a large piece of land to relocate.

Diagne with the support and advice of Devaux secured 15 hectares of reserve land for the conservation project - The Noflaye Tortoise Village. However, such initiatives need a lot more than passion and support alone because financial funding is crucial. In 1998, Diagne received the Associate Laureate in the Rolex Awards for Enterprise and a grant of €152,000 from the European Union the following year, which allowed the work at Noflaye Tortoise Village to be completed at a faster pace. In 2001, the gates to the new village welcomed 4,500 visitors which included not only tourists but also locals.

The Noflaye Tortoise Village set up by Diagne is dedicated to the first naturalist to study Noflaye’s wildlife Théodore Monod and provides an interesting venue for learning. Besides offices and exhibition hall, the village also provides accommodation for scientists and volunteers. The entrance fees covers a large part of the expenses, but Diagne hopes that in time it will be able to self-finance itself smoothly.

As for the star attraction – the African spurred tortoises, the enclosures are similar to the log fences erected to keep cattle in Senegal. One of the distinctive characteristics of the Sulcata tortoise is it’s ability to dig deep burrows to protect themselves from the heat and cold. Thus, the adult enclosures are built with concrete walls sunk almost a metre into the ground to prevent underground escapes. At the Noflaye Tortoise Village there are other six species of tortoise and turtle such as the West African hinged tortoise, Nile softshell and the Senegal softshell turtles.  Diagne has made a conscious effort to keep only local land species and not attract visitors with “sensational species” despite the opportunity of keeping marine turtles from the Galapagos and the Seychelles at the village.

The urgency to save the wild sulcata from extinction has been a life long mission for Diagne, who hopes to some day reintroduce Noflaye sulcata’s into the wild. But it is dream which poses its own set of challenges as more research is required and the participation of the local community to guarantee the survival of the sulcata in its natural habitat after being bred in captivity. However, Diagner believes that: “there is no one species that should take priority – it is the whole ecosystem that counts." Therefore, his present projects include saving the mangroves of central Senegal for which the Total-Fina-Elf Foundation has already provided funding as well as Senegal’s national symbol - the baobab tree.

Diagne’s passion for his work is perhaps best characterized by the fact that the turtles in his conservation village have a name. His favorite is named after the 19th century Senegalese national hero Lat Dior who fought against the French. It was the first large tortoise to arrive at Sangalkam and would attack humans. The tortoise Lat Dior symbolizes his species’ fight for survival but as Diagne articulately elaborates: “I tell him that he can fight against humans, but he can’t win. I tell him I have another way for his species to survive."