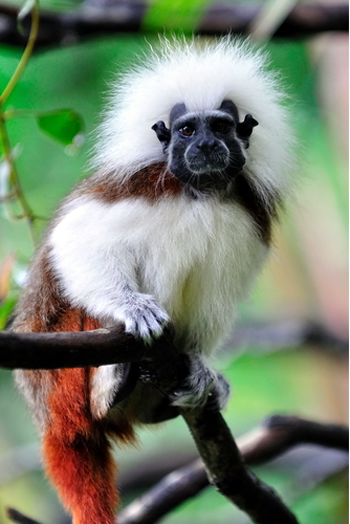 The Cottontop Tamarin, also known as Pinche Tamarin, is one of the three Amazonian species found mostly in the edges of northwest Columbia’s humid tropical and secondary forest. This monkey species is fascinatingly unusual as it is highly adaptable to its environment and counted among the smallest primate weighing less that 0.5 kg. Although the male is little bigger than the females, an average height of a Cottontop Tamarin is just about 232 mm.

The most prominent characteristic of the Cottontop Tamarin is its silvery white crest and a mane which flows carelessly from its forehead to it shoulders. It is a sharp contrast to the face which is black and almost bare except for thin white hair either on the side of the face and forehead temple area.  The hair on its back can be either black or brown while the other parts of the body are mostly white.  Their attention-grabbing features of small tusk like canines and claw-like finger and toe nails is further accentuated by their big toe nail which is flat and enables these arboreal creatures to live and move around trees with ease.

The behavioral pattern of these fascinating species makes the Cottontop Tamarin one of the most interesting animals to observe in the wild. They live in groups and are territorial with members taking care of each other. It is not uncommon for them to share their meals and bond with other group members, typical consisting of 3- 9 Cottontop Tamarin.  They are diurnal beginning their day early in the morning and retreat to sleep before dusk with their   diet consisting mainly of fruits, insects and even small animals such as lizards. Interesting, majority of the groups are monogamous with only one female made responsible for giving birth while other females relinquish their own fertility to care for the other young and juveniles.

The average life span of a Cottontop Tamarin in the wild is merely 13-16 years while in captivity there is a record of it having lived until the age of 25 years. According to researchers, Cottontop Tamarin’s have as many as 38 distinct sounds which range from birdlike whistles to high-pitched shrills. They are also known to stick to grammatical rules and can be expressive through sound in displaying emotions such as fear, joy and playfulness.

In the mid 1970’s, primatologist Patricia Neyman conducted the only long-term study of Cottontop Tamarin where she researched the characteristic of the group and even “live-trapped and marked” them. The conservation projects in Colombia such as the La Reserva Forestal Protectora Serranía de Coraza-Montes de Marìa by Disney's Animal Kingdom conservation biologist Dr. Anne Savage and her colleagues and The Proyecto Tití have helped forge a better understanding and survival of this fascinating species through innovative programmes and involvement of local communities. However, the conservation efforts remain restricted to the species in captivity and so there is a greater need to protect them in the wild.

Alhough the Cottontop Tamarin has been protected under Columbian law since 1969, it counted among 25 most endangered primates in the world today. This unique species finds its existence more and more threatened as its habitat is eroded by deforestation. It is also seen as a popular species in the exotic pet trade and for biomedical research. Like human beings, Cottontop Tamarin’s can unexpectedly develop colon cancer and therefore deemed valuable to cancer research.  According to Dr. Savage’s study, the US had imported thousands of Cottontop Tamarins in the 1960s and 1970s for this purpose. But after 1973, the dwindling numbers in the wild led the species to be listed as endangered and its export banned. It is estimated that there is less than 1000 Cottontop Tamarin’s left in the wild while in captivity it is only 1800.

In 2008, the Cottontop Tamarin’s were listed as Critically Endangered and their export deemed illegal.  There are initiatives in place  to save the species from extinction are but evidently a lot more needs to be done to save this unique animal.  With incentives for forest products and illegal wildlife trade remaining greater than the life of a Cottontop Tamarin, its fate lies in our conscience to let them roam the forest of Columbia free or be remembered by the few left in captivity.