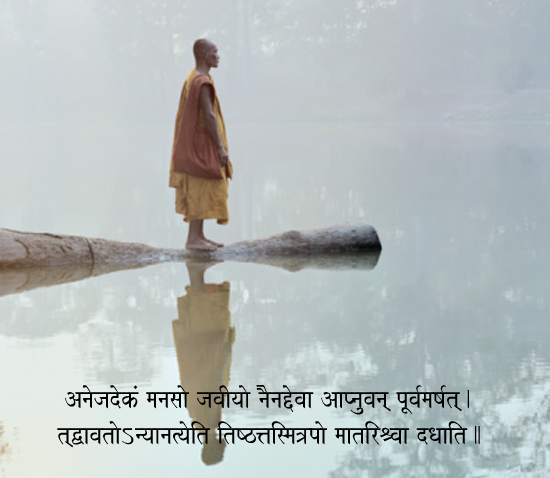 The Atman dwells in every being.
Although established in His place,
the personality of Godhead is subtler than the mind.
Being subtler, It is beyond approach of senses and devas.
Sitting, It travels faster than who run after It.
Because of Its presence, the air carries the water
in form of clouds
and sustains the life-operating activities of all beings.

In the shloka 4th to shloka 8th of the Isha Upanishad, we have the description of Infinite Consciousness indicated in terms of Gunas. The Eternal is without any attribute yet our seers try to explain Him in terms of language. The question arises; can we gain the vision of the nature of the Infinite in a particular form? Well may be a possibility by the grace of God or by intensity of devotion but such a vision is definitely not His true nature... A form, since visible, is inert, finite and perishable whereas the Lord is eternal, Infinite and Supreme. Vision is a duality of the seer of the vision.

The very first line of the stanza says that the Self is motionless. It is indicative of being of no speed. It indicates a static position as against dynamic one. But in case of Eternity, motionless suggests that all-pervading Consciousness is present everywhere at all times and at all places simultaneously; hence no question of any movement. The cosmos is its body, yet It has no body. It is subtler than the tip of a single strand of hair yet it pervades the entire universe. It pervades everywhere yet It moves not. The reality is that the Infinite Consciousness, being all pervading has nowhere to move about as It is already present everywhere, It needs no motion. This is in direct contrast with Jagat, the world, which is ever moving and changing.

The shloka suggests that the Self is swifter than the mind. It has been accepted all over that the mind is the fastest but the Infinite surpasses it. As it is present already in the place where mind has yet to reach and it can only reach later. The All-pervading nature of the Self is such that It makes its presence felt everywhere without any movement or dynamic speed as of other objects. In short, Self is the one, unmoving, faster than the mind, having preceded mind, It is beyond reach of the senses. Ever steady, It outstrips all that run. By its mere presence It enables the cosmic energy to sustain activities of life.

The seer uses the term, Anejat Ekam. It stands for Atman, the Self. He emphasises that the Self is Ekam i.e. one and only one, or one without a second. It is the highest and beyond that there is nothing. It is Anejat, unmoving and motionless. It is alone, Infinite and non-mobile. Simultaneously It is Manasah Javeevah - or swifter than the mind.

The term in self contradictory.

Vedanta says that when the mind is established in desirelessness, when it does not seek pleasure, when body and limb perform their natural functions, then action and inaction are of equal value and meaning. We also see that the mind can reach anywhere unchecked and unstopped by anybody. Even the structure of the atom has been found by the mind. So mind definitely is subtler than the atom. In this way that which is behind the mind, the individual Self is subtler than the mind. But the Self or Atman being omnipresent and beyond mind is already there even before the mind reaches the spot.

The stanza suggests that even the Devas cannot overtake or surpass the Infinite. Devta is the one possessed of great and useful qualities and powers, much higher and above ordinary individual. Nasadiya Sukta (10-129) says that Gods were born later than the world’s creation. Devas are celestial powers, generally benevolent and beneficent and death – postponing. Someone who confers selflessly benefit and advantage and expects no return is also considered as a devata. Yagvalkya in Brahad (111-19) speaks of 8 vasus, from the cosmos (Earth, Water, Fire, Ether and Air) plus sun, moon and constellation; 11 Rudras (5 sense objects and 5 motor objects plus mind) 12 Adityas (12 months of the year) and Time he rest two are Indra and Prajpati.  All these together constitute 33 gods in Vedic mythology.  It is obvious that the word Devata stands for sense organs. It is the Infinite Consciousness that makes the organs function properly through mind. Sense organs can only perceive the object but ultimately the rider is the Consciousness acting through mind. Geeta says (10-2) “Neither the host of devas nor of great seers know My origin and boundless supernatural powers and influences, for in every respect I am the initial cause of all.”

The line says, sitting It goes faster than who ran after It. We observe that the experience of pleasure and pain in relation to existence and non-existence of sense objects is attached to the condition of the mind. When the mind is at peace and the heart leaps to the Supreme Truth, when all the disturbing thought waves of the mind have subsided, then alone peace and bliss of the Infinite is gained. No sense organ can achieve it without grace of Infinite Consciousness. Hence the engine of Infinite carries with it attached bogies of sense organs and sense objects. Self is the very substance of Eternity in all movements and is the very force in face of all such seeming power forces.

The seer further says, sitting, It outruns all others. In fact, It is stationary, sitting. Still It goes past others who run. The Vedas say that all devatas such as Vatah (Air) are in ever-flowing state, unstopped and unchecked. Their movement is swift and very fast. Still they lag behind Him in the run. He, though static and unmoving and sitting goes faster than all others who run. This is indicative of the fact that the Infinite is Eternal, omnipresent and all pervading and nothing pervading It. The term , “Matarishva” used to express it is the most appropriate and befitting. Matarishva is the Lord of cosmic energy, the vital air, (oxygen), and the main source of life. We all get it from Akash (ether), the divine space and breathe our life or else the life existence of the world will be in danger of extinction. The divine essence is the vital Air, the life force from ether called Akash.

Water is such another force. It has oxygen and hydrogen in proper proportion. It has been called Apah. Apah and Apasa are interconnected and the power to release them is Matarishva; the great controller of cosmic energy. This life force operates under Supreme Consciousness, the Atman. The Supreme and the Matarishva is one and the same in this respect as our life source cannot be two but one and only one.