As the human race evolved from hunter-gatherer stage to a home dweller and grew to become the most powerful amongst all the animals, it also developed materialistic comforts. In the process besides comforts the race inadvertently invited hazards from the nature. At times one is compelled to think ‘are the machinations meant for human comfort (and also power) or they are becoming a liability?’ Who could ever imagine that the nuclear power generation facility developed by Japan would become a big encumbrance for the country!

Japan is supposed to be one of the best prepared countries to ward off a natural or a man made disaster. And yet thousands perished because the disaster was quicker than the residents. But this example is not to encourage complacency. On the other hand it was mainly because of the preparedness and self discipline of the Japanese people the number of dead was contained. Despite the great tragedy the lines of communication were open almost throughout.

Japan had the twin disasters of a great earthquake followed by the tsunami which damaged the nuclear power stations to such an extent that now the country is facing a nuclear holocaust. Since the nature has no boundaries, the nuclear cloud can move in any direction to any country and cause havoc there too.

Well what happened in Japan can be termed as a rare of the rarest of disasters. It was a misfortune for the country and it will take them considerable time to come back on an even keel.

There is no comparison between Japan and India when it comes to pre-disaster preparedness. Since the subject is vast, my contention here is to see how well prepared are we for a mega-disaster especially from the point of view of the telecom industry?

A fast developing country like ours needs rapid industrialization. Fortunately the process has been going on at a fast pace and results are coming forward. For industrialization the first and foremost requirement is the communication net work. Thanks to the policies laid by our former Prime Minister Rajiv Gandhi the communication network in the country has developed very well and is growing rapidly.

How rapidly our country is developing in terms of communication is apparent from the towers. Look around from a vantage point in any city, particularly a metro or an upcoming metro and you find the skyline punctured by the masts of communication towers. The first and foremost question that comes to mind after the Japan tragedy is that are our telecom towers earthquake safe? What if a powerful earthquake strikes a congested metro like Delhi? Will the towers, the mainstay of communication remain erect? In all probability no, because even the buildings atop which those towers have been erected are not earthquake safe! 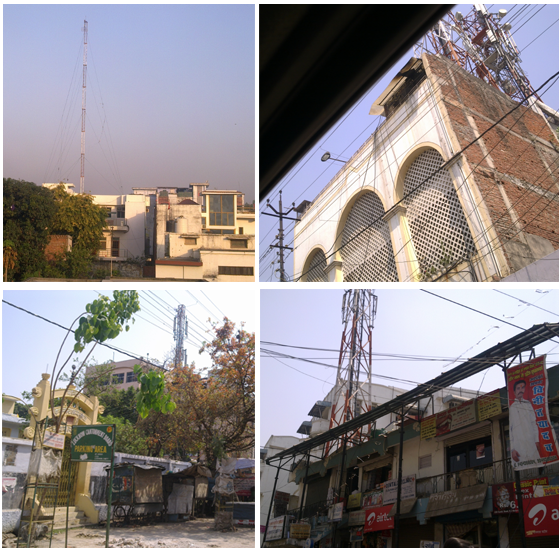 Lucknow, the capitol of Uttar Pradesh and an upcoming metro has towers atop flimsy buildings. Being on softer grounds in the event of a great earthquake localized heavy shaking of buildings in Lucknow can not be ruled out. Perchance if the building has communication tower atop, then the risk is doubled. In 2003 during a strong gale a telecommunication tower atop a building in the northern part of the city collapsed. Fortunately it fell on the roof itself, thus there was no casualty. Had it tumbled in the opposite direction a number of cars parked below would have been crushed!

In India there are 13 companies engaged in the erection and hiring of telecom towers. Around 460000 towers are already in place and as per the growing demand business pundits foresee that by 2015 the number would be at least one and half times more. Reliance Infratel has the maximum (31000) towers in the country.

Not only India, even the neighboring Nepal, which is very vulnerable for a powerful earthquake has 550 towers, most of them are risky says a UN report.

During an earthquake in 1995 in Japan 6400 people lost their lives and over 43000 people went missing from Hanshin and Awaji towns. It was found that buildings and communication towers atop constructed before the implementation of Earthquake Proof Designing guidelines (1981) suffered maximum losses. In other words they laid the guidelines as early as 1981 and credit goes to the people of Japan for adhering to them. Those who shirked they lost their lives in 1995. Before enacting the guidelines in 1981, Japanese structural engineers and seismologists carried out extensive studies to work out the natural period and vibration properties of steel towers. The linear structure of the towers makes them vulnerable to damages during a severe shaking due to an earthquake or even a storm.

Minimizing the risk is the first step in disaster management. Public facilities like telecom and power transmission towers have to be constructed with utmost care. Transmission towers of Power lines are fortunately not erected atop houses and the authorities concerned do not permit construction of residential houses within a certain distance in India. Alas in the matter of Telecom towers such considerations are only on paper, while one can see innumerable towers perched at most vulnerable places in congested areas. As per the newspaper reports about an year ago, the Department of telecommunication did issue guidelines to all telecom tower companies to ensure that their towers are earthquake resistant. Towers perched atop hazardous buildings in congested areas speak volumes about the ground realities. This is mainly because the building owner leases his roof for the purpose and gets a handsome amount of money in return. Land costs being prohibitive the tower companies also make lots of savings. But all this is at the cost of human lives.

In India lots of studies have been taken up regarding the radiation hazard from telecom towers and also there are attempts to make the towers green. It is interesting to know that estimated carbon dioxide emission from telecom towers in India is 5.3 million tons per year. Diesel worth Rs 6400 crores is consumed each year to keep these towers running and lines of communication open. Experts say that use of solar energy to provide the required power to these towers can save the huge amount of money and also a handsome income will be generated from the carbon credits earned.

Alas no systematic studies have been carried out about the hazard (earthquake, storm, fire and tsunami) vulnerability of telecom towers, particularly on the roof tops. It is time that the government comes with an iron hand and institutes a safety audit of all the towers to minimize the risk in the event of a natural hazard.