Look What Have We Done to Gomti 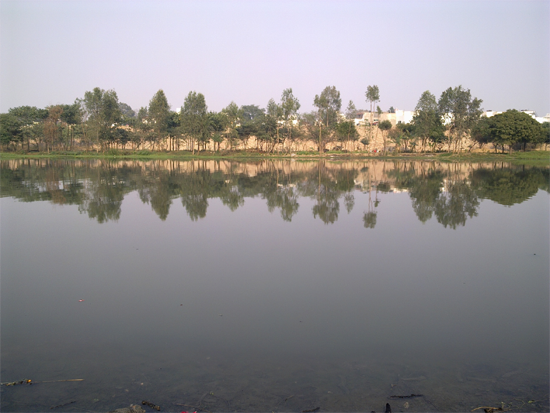 Imagine the reaction of the Englishmen upon reaching Lucknow the historic city of northern India. For them here was a calm river meandering through the countryside like a matured woman gently swaying her hips through a crowd of men! The beautiful Gomti must have given them nostalgia for Thames! They must have fallen in love with the place and decided to settle here.

‘This town on the river Gomti has been in existence since the sixteenth century at least’ says Violette Graf in her book ‘Memoirs of a City’. The towns of the yore like Delhi, Agra and Jaipur were surrounded by a wall. Unlike them Lucknow was an un-walled habitation which became a capital of the province of Awadh since the times of Akbar the great.

Call it the human weakness or the love of the Mughals and later the English for water front, majority of the palaces and buildings came up on the right bank of the Gomti. In those days the River was not a stinking mass of water, clogged with urban and industrial waste. Gomti is considered a mother by devout Hindus and worshipped. Unmindful of the pathetic condition of the river, a devotee even now gets a satisfaction by taking a dip in the River on every full moon.

Lucknow, the capitol of Uttar Pradesh in India straddles both the banks of the river Gomti, which is an ancient river. Majority of the north Indian rivers originate from the mighty Himalayas. But Gomti is different. It takes birth from a small pond, Gomat Tal near a small town Pilibhit in northern U.P. Despite its origin from a small pond Gomti is a perennial river.

Gomti has seen lots of history. As the story goes Shri Ramchandra ji after defeating Ravan, on his way back to Ayodhya, gifted this area to his brother Lachman ji. A village was constructed on the highest mound thus named ‘Lachman Tila’. Gradually from Laxamnapuri the town acquired the name Lucknow. Nawab Asaf-ud-daula after ascending the throne of Awadh, in 1774 preferred to live in Lucknow. He established his palaces in the highest ground on the right bank of the river Gomti.

Claude Martin, during the reign of Nawab Asaf-Ud-Daula constructed a number of exquisite buildings in Lucknow. However, his town residence (later named as the Farhad Baksh) deserves a special mention here. This building on the right bank of the Gomti close to the residency was finished by 1781, says Rosie Llewellyn-Jones in her book ‘A Fatal Friendship.’ Farhad Baksh was a unique energy–efficient building. ‘Below the ground floor of the building there were two more floors. These were like caves within the bank of the river and level with its surface when at the lowest decrease quotes Rosie.’ These were Martin’s living rooms during the scorching summers. As the river rose during the rains he moved to higher levels and in the winters he occupied the ground floor and enjoyed the Sun on the huge terrace overlooking the river.

The objective, however, of this write up is not to dwell upon the architectural grandeur of the buildings of the Raj, but to emphasize about the crystal blue waters of the Gomti in those days!

Post Independence era saw a multifold development of the country and of the state as well. With the increased agriculture in the Ganga plains, the population pressure also increased. Net result a sick river, yes, Gomti the Thames of yesteryears, a revered river has a dwindling health, report Amit Kumar Singh and Munendra Singh of Geology Department, Lucknow University.

Natural interaction of physical, chemical and biological processes keeps a river ticking, flowing and healthy. For that reason perhaps, our ancestors though ignorant about the terms like environment and eco-system, revered the rivers as deities and kept them clean. Alas, over a period of time we forgot our old values about a river and began to treat them as natural drains for transporting our muck to distant places. May be this keeps our settlements clean, but the health of the river is in pretty bad shape.

One wonders that the rivers like Chambal, Narmada, Kaveri etc do not have this problem of highly polluted waters compared to Ganga, Yamuna and Gomti! The reason lies in the hydraulics of these rivers. The rivers of the Ganga plains excluding Chambal and its tributaries came in to being after the new slopes were formed in the post mountain building phase which started some 20 million years ago. The rise of the Himalayas increased the rate of erosion; consequently the rivers brought lots of alluvium and dumped it in the plains, layer after layer in the post-monsoon period. The soil brought by the rivers gave the region a fertile land which became a centre of attraction for the farmers. Soon the region grew prosperous and attracted more population. The latest census report says that the population density in this region has reached 800 people per square kilometer.

Ganga and Yamuna being snow fed rivers with a large catchment area have a much higher discharge than Gomti. While the later sluggishly meanders along its course all through the other major rivers flow smoothly in comparatively straight course. The English called Gomti as ‘Ghoomti’ or ‘Goomti’, which subsequently became Gomti some people, believe. Whatever, a meandering river has a tendency to straighten its course and in the process over a period of time the river leaves behind several Ox Bow lakes.

Lucknow, as per the 1912 map of Survey Of India had more than 300 water bodies, presumably the remnants of Ox Bow lakes all over the city. These lakes were a natural source of water and also natural structures for rain water harvesting. The population pressure grew with the passage of time and these water bodies were filled with urban waste to ‘develop’ plots of much required land for habitation. Thus the habitats grew at the cost of water bodies. The practice started in the British times and continued all through and sad part is that it continues even now, despite the strict laws against it.

Gomti has a peculiar nature, in some stretches it takes water from the aquifer and while in other it gives water to it. Thus it maintains a round the year flow this process of give and take. While developing urban habitats we either ignored this fact or overlooked it. Now with the towns packed to capacity more and more holes are punctured each year to draw water. The aquifers of Lucknow are thus stressed. If the aquifers are stressed the river is bound to be upset. A slight decrease in flow in the pre monsoon seasons makes the river carry a suspended load of urban waste. In the process plenty of toxins get dissolved in the river water. Lack of sanitation or improper sanitation and dearth of sewage treatment plants have resulted in the increase of coliform bacteria beyond imagination.

The Singh duo of Lucknow University collected samples of river water from six points along the length of the river. Results of some of the elements and toxins are tabulated here, just to show how severally we have damaged the river water.

Some elements and toxins found in Gomti water in Lucknow.
(After Amit Kumar Singh and Munendra Singh)

During the monsoon the river discharge is increased by 100%. During this period it dumps its extra load in its flood pathway and forges ahead. Alas in the portions of river developed as urban settlements, both the banks have been jacked. As such the river can not dump its extra burden. The only alternative with the river under such circumstances is to leave the extra load in its bed and move ahead. Consequently the river bed is rising after each monsoon. After a few years a stage would reach when the height of the ‘Bunds’ on both the banks would need to be increased. This is an endless process, unless someday the river decides to take revenge like the Kosi and break the bund and engulf the population. 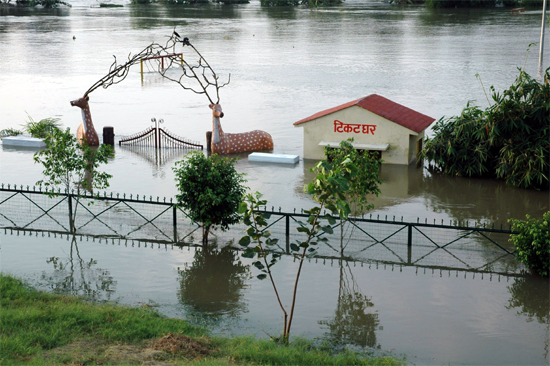 It is time to view the river in totality and then draw development plans. Before that a sustained effort by the society will have to be carried out to restore the glory of the river.  Local society, Lok Bharti with several other groups has organized a ‘Gomti-Ganga Yatra’ to study the impacts of human being on the river system. The members of this group are trying to motivate the local people about the river hygiene, sanitation etc. This is just a beginning; many more groups will have to come forward to rejuvenate the river like the Thames or the Hudson Rivers.

We must always remember that we are on this planet just because of the availability of air to breath and water to drink. If we go on soiling the surface water bodies with our excreta and industrial waste and mine the ground water then time is not far when we may have to shift to some other planet-provided it is there. Or else perish.

Images
Gomti needs to be revered again.
Let the flood pathways of the river be left alone.