Recently Luc Montagnier – the French scientist, who received the 2008 Nobel Prize in medicine for the discovery of HIV virus, has experimentally shown that it is possible to replicate and transfer DNA strands from one test tube to another by simply passing a very low level electromagnetic (EM) radiation of 7Hz through them. This is almost like teleportation of life and, if proved correct, could be one of the most revolutionary discoveries of modern times.

Body is repaired, rejuvenated and kept healthy by production and replication of good DNA. Any mutation or breakup of DNA leads to cancer and other ailments. 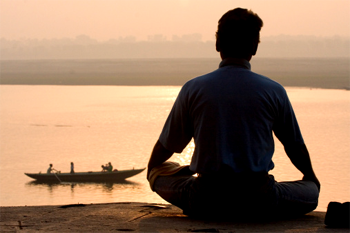 Also under deep meditation brain produces EM waves called theta and alpha waves ranging from 4-12 Hz but mostly in the range of 7-8 Hz. It is therefore possible that deep and regular meditation helps in rejuvenation of the body by helping replicate good DNA. In Patanjali Yoga it is written that “By Sanyam or deep meditation on the elements, a Yogi gets a perfect body of beauty, grace, strength and hardness of a thunderbolt”. Meditation is like an elixir of life.

Deep meditation is basically focusing the mind on a single thought for a long time. Patanjali describes it as Sanyam or a combination of contemplation, meditation and Samadhi. He says that when all these three things are brought to bear on any object, its complete mastery results.

Recently some more scientific studies have shown the direct effect of meditation on DNA and gene expression. For example a study has shown that meditation helps in delaying the process of ageing by increasing telomerase activity. Telomerase is an enzyme which repairs the DNA. Chromosomes have caps of repetitive DNA called telomeres at their ends. Every time cells divide, their telomeres shorten, which eventually prompts them to stop dividing and die. This results in the ageing process. However telomerase enzyme stops the shortening and meditation helps in increasing the activity of this enzyme.

Similarly another study done at Harvard University showed that meditation directly affects genes by switching them on and off so as to combat the bad effects of free radicals which are produced when we are emotionally and physically stressed.

All these studies have shown experimentally the positive effect of meditation at the cellular level in human body though the exact mechanism is still not known. I feel Luc Montagnier’s work of low level 7 Hz EM waves affecting the replication of DNA may hold the key to this puzzle.

Similarly, during the dreaming process the brain produces 4-7 Hz Theta waves waves. Sleep and dream research has shown that deep sleep and dreaming is very necessary for our well being and helps us in consolidating our day-time memories and also in removing some of the frivolous ones. However it is quite possible that besides the memory consolidation, 4-7 Hz EM waves may also help in rejuvenating the body and mind by enhancing the replication of DNA.

In the DNA teleportation experiment Luc Montagnier also showed that DNA template was teleported from its dilute solution in a test tube to another one containing only water. In effect it showed that low level radiation of 7 Hz produced a memory in water which matched the DNA molecule. Water with its unique weak hydrogen bond capability can form almost infinite number of structures and it seems the low level radiation simply helped in this process.

Meditation has been practiced through ages in almost all religions and its therapeutic value on calming the mind has been well known, but the recent discoveries show that it also affects the body at cellular level and hence is a true elixir of life.