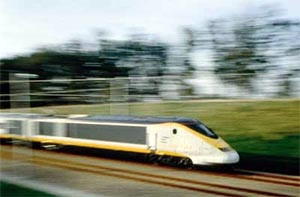 When Eurostar first started out four years ago, there was speculation about whether people would prefer it to traveling to Paris and Brussels as compared with flying across. Today, it is evident that the train is offering the airlines a run for their money. What are the advantages, if any, of traveling by Eurostar?

Sabita Sharma, 36, working with an American multinational is a frequent business traveler to Brussels. She finds Eurostar convenient because there are far fewer formalities involved in the checking in process. 'Its true that since the past couple of weeks they have increased the security, but even then I find it's faster than checking in at the airport,' she says. 'I also save time on the travel from the airport. Eurostar starts from Waterloo which is five minutes away from my office and it drops me off at Midi Station which is in the heart of Brussels.'

Robin Lacey, 22, a student studying journalism at University, has visited Paris three times and has found Eurostar 'very cool'. He likes the fact that he can talk to his friends on the mobile while he is on the train. 'Well, I hear that if you make a request you can talk to people on an aircraft also,' he says, 'but you have to pay a phenomenal amount of money to be able to do so, whereas if you are on Eurostar you can talk to all your friends at local rates till the train enters the Channel Tunnel.' Is there any advantage for him to be able to speak on the mobile on the train? 'I suppose I could read the newspaper,' he admits, 'but I find talking the best way to pass the time.'

There is generally an announcement made on the train that people who use their mobiles should show consideration to other passengers. 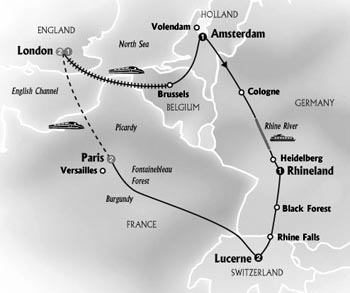 'I've never been bothered with people talking on the mobile,' says Betsy, 54, a housewife from Northampton who goes to Brussels every few months to visit her daughter who is married there. 'People are generally discreet.' What she sees as the chief advantage of Eurostar though is the reduced possibility of losing your luggage. 'I've had problems a few times with my baggage while traveling by airplanes. The good thing about Eurostar is that you can keep your luggage close to yourself. Even if you have to keep it in the storage, it's in the same compartment and generally quite safe. I mean, Eurostar stops only in Lil Europe in France on the way to Brussels.'

With competitive prices, it appears that Eurostar is slowing building up a stable of regular clients who would not trade the conveniences of train travel for jet setting across to Paris and Brussels.