How much Land Does a Man Need?

Pahome, the maincharacter of Leo Tolstoy’s story, ‘How much land does a man need’ had a lust for land. His boundless greed led him to his grave to prove the contention, that whatever one may crave for, ultimately it is the six feet of grave which a man requires. Since man started farming, it seems his lust for land has grown unabated! Stories sometimes expose the blatant truth. Through his story Tolstoy’s conveyed a message that if you control your craving for land you save the soil for a better purpose - agriculture. But our greed and also at times the nature, both have abetted in the loss of soil which is a matter of concern globally.

A report of the Council of Scientific and Industrial Research in South Africa says that soil erosion and other forms of land degradation now rob the world of 70-140000 km2/year of farming land. Urbanisation alone is responsible for the loss of 20-40000 km2 arable land each year. We are losing 100 billion tonnes of top soil every year. This is five times faster than nature can create it. The total world availability of top soil is estimated at 7000 billion tonnes - this leaves us with about 70 years of topsoil, the report says! This is not a very comfortable situation! 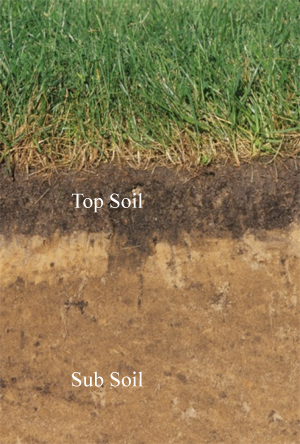 One million hectare of land had been degraded and lost in India claims K.D. Sharma of National Rain fed Authority of India, in one of his research papers published in Current Science. Arable land is lost by natural processes and sadly due to anthropogenic intervention too.

Natural processes are dynamic, yet they maintain a balance. Thus average net sown area (NSA) remains least disturbed, because if nature removes soil from one place, it provides better soil at other place. For example, in case of floods the soil of the area flooded gets enriched by the nutrient rich soil transported by the river from the upstream and spread over in the flood plain. Anthropogenic activities, however, are not in harmony with nature and the land ‘encroached’ for developmental activities like the ever increasing sprawl of urbanization in the towns or creation of Special Economic Zones (SEZs) all lead to loss of NSA.

Sharma reports that trends in land use in India indicated that NSA had stabilized at 140 million hectares from 1980s onwards. Quoting Food and Agriculture Organisation’s (FAOs) report he says that about 59.2 million ha NSA had been lost by 2003. This decline in NSA, he attributes to lower average rainfall during 2002-2003. Similarly, during 1988-89 too he says due to less than average rains the rate of increase of NSA was appreciably high. Lack of rain during the season leads to fallow lands which are further increased because of poor management of the irrigation system.

Based on selected case studies Sharma argues that unrecorded decline of NSA is much higher than the recorded one. Again this is quite an alarming situation, because the soil once lost takes 1000 years to regenerate. The farmer’s livelihood is thus permanently affected. As of now no one seems to be bothered about the loss of arable land. In fact there is more emphasis on the so called ‘development’.

For example, in Lucknow the capital of Uttar Pradesh the large tract of low lying land on the banks of the Gomti River was filled up first with urban waste and then with huge amounts of soil excavated and transported from the agricultural fields on the outskirts of the town. No doubt the area has been beautified and glitters well at night, but at what cost? The hundreds of acres of field that have been excavated will get their soil after 1000 years and the farmers tilling those fields will have no option but to seek alternative sources of employement.

The figures of land degradation given by different agencies vary. The most recent is 105 million hectares. The figures might vary but the fact remains that land once degraded is lost, leading to landless owners, lower food production and increased efforts (in terms of labor and money) to till soil-less fields.

Land management is significant in such a situation. Rajasthan, Gujarat and Maharashtra have large areas under dry lands. Soil erosion, alkalinity and indiscriminately created mine dumps and tailings are the issues to be tackled in the states, as more than 90% land is affected due to these ailments.

Traditional farming practices involved crop rotations. For example, it was common knowledge that after a wheat crop legumes were sown to reclaim the nitrogenous content ofthe soil. Now the farmer is keener to make a rich harvest in terms of money, rather than bother about the soil condition for the next crop. This is because the farmer knows that use of nitrogenous fertilizers will enrich his farmland. It does, but takes a toll on the natural system by releasing excess nitrogen which leaches down to ground water reservoir. Technically it is feasible to reclaim the soil nutrients or enrich them, but for the poor illiterate farmer all that is out of reach. Educating the farmers for use of the latest technology is one partial solution of the problem.

In the past three decades India has shown unprecedented growth. Every day we learn about new roads, ports and airports and housing schemes coming up. In 2005 and 2006 the government brought the Special Economic Zone (SEZ) Act and notified rules. These two aimed at boosting the development have created a mad rush for the land. Bhatta-Parsaul village of Gautam Budhha Nagar in U.P.  is much in the news these days, because the farmers of the village are protesting against the acquisition of their farmland for development and resale to the land developers. The farmers ofcourse are claiming a much higher compensation than offered by the government. The issue here is not to justify either the government or the farmers; it is the land which is going to face the brunt of the action. This land once ‘developed’ will be lost forever for sowing.

Sharma in his research paper says, ‘it is estimated that the land required for the 267 approved SEZ is 1.129 million hectares. The policy is not clear on the location of the SEZs and the process of land acquisition is left to the state governments.’ That is why land alienation like Bhatta-Parsaul are becoming an order of the day. Politics apart, the so called intended development may bounce back on the society after four to five decades, when suddenly the society will realize that there is hardly any land left to sow!

The land acquisition in Andhra Pradesh and Karnataka is taking place at a much faster rate; consequently the land prices there have gone very high. Since there is no policy and guideline about the location of the SEZs, rich fertile farm land is more in demand. It is for the government to formulate laws, so that only the dry and barren lands or non-agriculture lands or the lands of backwards areas are acquired for the SEZ.

For sowing of crops we need soil. It takes the nature 1000 years to create soil. To reap a good harvest a farmer further enriches his soil with the help of nutrients either natural or chemical. After the Independence it took long time for the country to become self-sufficient in foodgrains. If the NSA goes on depleting at a fast rate like today, a time may come when we may be compelled to import food grains again. There is a need to strike a balance between the development activities and agriculture. There are agriculturally rich fluvial areas like Punjab, Ganga-Brahmaputra and Meghna Plains which need to be developed as the bread basket of the country. On the other hand non-productive areas could be utilized for developing SEZs.

In a nutshell, there is a need to develop and there is a dire need to save the soil as well. Franklin D Roosevelt had rightly said, “The nation that destroys its soil destroys itself”.