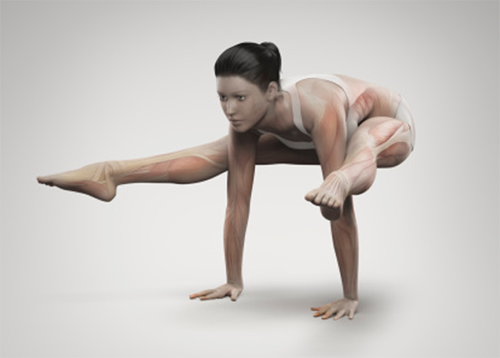 Yogic exercises are normally done to tone the body and the nervous system. Yogic exercises come under Hath Yoga system which is one of the eight limbs of “Ashtang Yoga” as enunciated in Patanjali Yoga Sutras. Hath Yogis have believed that the body toning is a result of nerve stretching. This belief may have scientific basis.

Recently scientists have discovered that cells in human body change depending on how they are stretched [1]. They have shown that if you pull a stem cell in one way it starts developing into a brain cell; stretch it in other ways and a muscle or a bone cell results! And the most far reaching consequence of this stretching is for cancer cells. Change their mechanical stress and they start behaving like normal cells!

The Yogic exercises of stretching the nerves and toning the nervous system that ultimately affect the cells mechanically can therefore affect the body in a very positive way at the cellular level.

Till now the biological and medical community believed that whenever they wanted to know why a cell behaved in a certain manner, they needed only to identify the genes, proteins and other chemical processes and pathways for the answers. Biological community considers chemical processes to be of paramount importance. However in nature all the forces are taken into account for a system’s evolution and mechanical stress at cellular level is as important and prevalent as the chemical process.

Scientists have also discovered that though the cells in human body are subjected to mechanical stress and strain in every part of body, their native environment exerts the maximum effect on their growth and development [1]. For example, a cell stressed in a certain way will not convert into a nerve cell if it’s near a bone. The chances of it becoming a bone cell are higher because of the physical and chemical environment of the existing bone structure.

This could be the basis of Yogic asanas which in their innumerable forms affect and tone very specifically the nervous system of different parts of body. Some like Pranayama, Nauli (gut wrenching), Sheersh Asana (head stand) and focusing the eyes to the center of forehead in meditation, affect the deep nervous system and could help in rejuvenating the body. Production of healthy cells is the most important aspect of rejuvenation of body.

For example in the dhyana asana of focusing the eyes on the center of forehead, the optic nerve gets stretched by about 1-1.5 mm. This stretching may help stimulate the pituitary gland since the optic nerve passes very close to it before reaching the visual cortex at the back of the brain [2]. The pituitary gland is the master gland of the body and its secretions help in maintaining the harmony of other endocrine glands. Besides it secretes the oxytocin hormone (also called happiness hormone) and almost all the sexual chemicals [3,4].

Similarly the deep muscle massage may also help in the stretching of cells. But it should be done properly otherwise cells may convert into other and harmful cells. For example scientists have also found that prior to formation of invasive tumors, the cellular matrix surrounding the regular cells became stiffer [1]. This stiffening could be the result of physical or emotional stress. Thus the change in “microenvironment” of cells with stress may be conducive to cancer formation. Scientists believe that one of the ways of curing cancer could be physical manipulation of this “microenvironment”. Yogic asanas may help in this process.  This could also be the reason why the Yoga practitioners have always suggested that some of the difficult Yogic asanas affecting the deep nervous system should be done under the supervision of experienced Yoga teachers, so that the cells are stretched in proper manner.