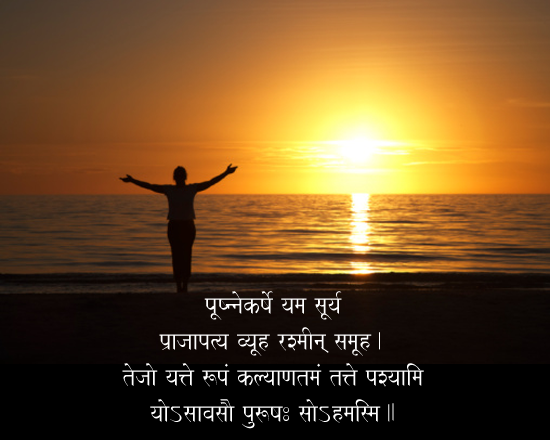 O Pushan, Sun, the sole pilgrim of solitude,
Controller and absorber of all,
Off spring of Prajapati;
Withdraw thy rays and gather up
Thy radiant brilliance.
That form of Thine,
Most gracious,
Through Thy grace, I may behold.
He, the Purush in the solar ark, I am.

It is a known fact to remember that the guru of the seer Yagvalka, the compiler of Shukla Yajurveda Samhita and Isavasyopanisad was Lord Sun and it was Lord Sun who had taught the Samhita to Yagvalkya. Guru and God are considered to be ever one and the same. So the declaration,  “He am I”, the Purush with Thee; or He is the one “That resides in Him, the Purush.”

For the seer, the Sun is the great sustainer, disinfector, filler of life with flavour, the sole seer. The guru and the Atman is the same.

Deeply absorbed in meditation, the seeker wishes that Pusan, the sun, the sole traveller of heaven and controller of all, son of Prajapati may withdraw its rays and gather up “Thy effulgence through Thy grace” so that he may behold That gracious form. These bright rays of effulgence are dazzling and deluding the seeker in any direct realisation of the Supreme.

It is the moment when the seeker in his deep meditation has reached the point of vision but it is simply an out-station. His experience level points out that he has almost reached salvation. His ego-sense has almost vanished and he stands a little distance away from the goal.  Unto this point the seeker takes himself as seer and the other as seen. So it is the duality that hinders. There exists the presence of seer, sight and seen.

It needs to be explained that people generally feel that a vision is possible within the duality of seer and seen but in Vedanta the vision is the knowledge free from the duality of seer and seen. Vision of Self is the knowledge that comes with direct experience That I Am of the nature of Pure Existence, Consciousness - It has yet to dawn. The ego sense still remains. The ego or the mind is not dead.  This means that the ego as apparent creator of ideas, planner and originator of policies has still to come to an end. The notion of doership and enjoyment is still alive. It is only when the ignorance born ego is destroyed that Pure Awareness shines and Pure Self manifests of its own.

As God is one and there is nothing else but God, there does not exist any duality.

These lines indicate that the seeker has reached a high level of experience but the Reality knows no level. Hence this level has to be displaced as the triad of knower, known and knowable appear in time and space whereas Reality is beyond it. This leads the seeker to prompt for direct experience and hence the request that even the bright shining rays be withdrawn.

Experience of realisation is known as Samadhi. It is supposed that it implies trance but it is not essential. The seeker has a pre-glimpse of realisation and such holding on Reality is Samadhi. This state of beholding His glimpse with effort has been termed as Savikalpa Samadhi. Now the seeker has to merge in Reality and be unaware of the world. This is called Nirvikalpa Samadhi. In this state, the seeker identifies himself with the entire cosmos, his field of identity expands and he becomes one with the Total. Reality manifests itself spontaneously. It reveals Itself as ‘I’ but it is not the ego - the small ‘i’ - but the Almighty Self.

Mystics and saints all have experienced such raptures in their transcendental love for the Supreme Consciousness. The Bliss so derived has been extolled by seers and sages. It is Eternal, unparallel, Infinite and Ineffable Bliss of oneness with the Pure consciousness. One has to understand that this Bliss has nothing to do with the external life of worldly affairs as it is an inner experience beyond any concept of body and senses. It confers Beatitude in the realm of spirit. The seeker reaches beyond the reach of pain and pleasure and duality as the knower and the known merge into one. He lives in a high realm of human Consciousness.

The seeker now utters, “I am the Purush in Thee” (Purush Aham Asmi).  This is attainment of Self realisation. It is the most simple and natural thing, simply a state of Being which is yet it is a rare state, unreached even by great saints. The seeker now has transcended all destiny and body and senses no more can bind him as he does not identify himself with them or with any other notions and concepts. So destiny no more can bind him. The seeker now has merged in Thee. The knower of Brahman has become Brahman. The seeker no more sees the most auspicious form that Thy possess but with the destruction of ego-sense of self identity, he realises the Reality that I am Brahman (Aham Brahm Asmi).  He realises the Self to be his own Self and his own self in all beings. There is one alone and there is no second.