Basavanna : A Kabir in his Own Right 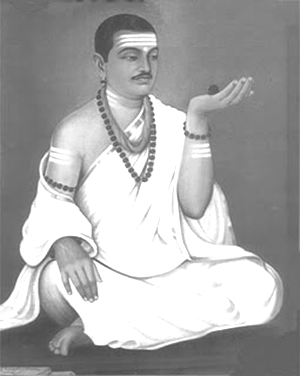 Basavanna wrote poems full of abstract thought and content. Visual arts have seen the growth ‘abstractism’ in the present century. Abstractism is defined as what the artist creates without following any set of rules about the visual arts.  It can be said the artist works from his or her imagination or subconscious. The inner self finds expression.

Often these works are difficult to explain or interpret, even for the artist creating them. In actuality, explanations and interpretations should be left to the viewer (reader); the artist should remain silent on this aspect.

Artists within Abstractism look at all art with a new eye, with new feeling and with new emotion thus creating an entirely fresh view and style. The work created by an artist is for the viewer to observe and contemplate, to conjure up a feeling within (not necessarily related to the title). The artist creates the work to evoke an emotional reaction.

Basavanna’s poems spring from the subconscious. He is not very particular about his technique but his poems do conjure up an emotion. The name of that emotion is restlessness. Basavanna writes in order to make the reader unhappy with the existing state of affairs. The revolutionary Basavanna, the saintly Basavanna sings in order to change things. A Brahmin who writes against Brahmins, the example of this great visionary of 12th century Karnataka is unique in world history. To quote:

when the fire goes wild
and burns the house

they splash on it
the water of the gutter
and the dust of the street,

beat their breasts
and call the crowd.

These men then forget their worship
and scold their fire,
O lord of the meeting rivers!

Can anyone believe that a Brahmin is writing these lines? His osmosis with the masses was so intense that ‘melting waves’, shapelessness, and elements – these have become the dominant symbols of his poems. The hypocrisy of the Brahmin household cannot be missed in the above quoted lines. Fire is the great leveler here while lord of meeting rivers is invoked at the end of this beautiful poem. It is highly symbolic and poetic that fatigued to the core by the traditional forces in the society, Basavanna finally went to ‘melting waves’, meeting rivers or ‘sangam’ as we say in Hindi. His end is his beginning. The physical end of Basavanna i.e. his merger into the waves is actually present throughout his poems. He wrote hundreds of poems invoking ‘the lord of meeting rivers’ and finally became that lord.

Poems of Basavanna highlight his abstractism. Abstractism is said to be a 21st century concept but it is actually not so. Basavanna is just one example of the fine lineage of abstract thinkers and artists in India.

Rebellion is the key to abstractism. While India has been the land of theorizing; she has also seen a number of spiritual, literary and social rebels.

Basavanna combines within himself all these facets of rebellion. His spirituality drastically differs from classic forms of worship and religiosity. His literary style is unique. His social message is to end hierarchy. He is against categorization of human society. He is against eliticism. He believes in the dignity of labour. He wishes to bring thieves, outlaws, prostitutes, in fact, all marginalized sections of the society into the mainstream. He was even successful as a social reformer. His language is simple. His style is touching and innocent. Just as we say in our day to day conversation, ‘Whose man is he?’, meaning thereby as to which group the man belongs; Basavanna also feels tired of the continuous query, ‘Whose man?’:

O lord of the meeting rivers,
make me feel I'm a son
of the house.’

This is a very sensitive poem where the desire of the poet ‘to belong’ is intense. He asks not to ask as to whose man is he; he is son of the house. ‘Son of the house’ is again a very Indian expression. ‘Ghar ka ladka’ – there cannot be anything more dear, more near, more precious and lovely than that. If one calls someone ‘son of the house’, it means he is accepted. This is Basavanna’s craving. Acceptance, assimilation, inclusion – this is Basavanna’s social message. He implores the reader to say, ‘every human being is mine’. Basavanna is intense. Basavanna is sincere. He is floating on ideas all the time.

Can spirituality be sensuous? With Basavanna , the answer is ‘yes’. Meeting God is an act of love:

When
like a hailstone crystal
like a waxwork image
the flesh melts in pleasure
how can I tell you?

The waters of joy
broke the banks
and ran out of my eyes.

I touched and joined
my lord of the meeting rivers.
How can I talk to anyone
of that?

I call these lines revolutionary. The expression ‘the flesh melts in pleasure’ followed by tears of joy and finally touching and joining the lord of meeting rivers – this completes the spiritual cycle. Meerabai, Surdas, Raidas, Tukaram, Raskhan - the list of those who mate with God is endless. God here is an experience soaked in ‘rasas’. One does not have to be ascetic, strict, dry, and unworldly in order to love God. God is a joyous experience. Indian spirituality takes one towards trance. Trance is a mixed state; it is both mental as well as physical.

Basavanna is simply revolutionary in his attitude. The freshness of his approach to various traditional subjects is infectious. He approaches a subject directly and squarely. There are no sideways for Basavanna. His love for the poor, the downtrodden, the marginalized is so intense that he comes up with strong arguments in their support. For example, he says that the rich may build temples because they can afford to do that but the poor will make their bodies the temple of God. The next argument is simply bewitching. Basavanna says that static things like temple may decay but things which are dynamic, mobile and changing never decay. Flexibility, movement and change are signs of life; buildings cannot signify life. Therefore God very much belongs to the poor. In the following lines, we may also mark the poet’s oneness with the poor. He is at once one with anyone who is weak, helpless or vulnerable.

The rich
will make temples for Siva.
What shall I,
a poor man,
do?

My legs are pillars,
the body the shrine,
the head a cupola
of gold.

Listen, O lord of the meeting rivers,
things standing shall fall,
but the moving ever shall stay.

Basavanna is spontaneous. The reason why I wish to call him an artist of abstractism par excellence is that he is natural and yet he is self-critical; he is rational and yet he does not follow any set line of literary tradition. He has created his own path. His diction is his own and so are his themes and style. Some lines in the Introduction of the compilation of Basavanna’s poetry by Kannada University, Hampi are worth quoting as they throw light on the literariness of Basavanna:

The themes form and the modes of stylistic narration of  Basavanna’s poetry are dictated by the fact that they are addressed to the common man. Basavanna and his peers did not want to produce a body of literature which would be a continuation of Kannada literary tradition set in motion by their predecessors. They acquired literary significance because they focused on the spectrum of subjective human experiences and they employed many literary devices in a guileless manner. They did have a world view, a philosophical core and a literary theory.

The poetry of Basavanna has some unique features that are not pre dominant in his contemporaries.

Firstly, his zeal for social reform caused him to convert his poems in to a critique of the social situation that was prevalent at that time. This was inevitable because change cannot be envisaged unless there is an intense dissatisfaction with the present.

Secondly there is a strong streak of self criticism and analysis which is not present to the same degree in his fellow poets.

Basavanna is not a votary of obscurantism in any of his writings. Mysticism assumes secondary importance and philosophy if any is highly communicable because of the metaphors and images used by the poet. Most of the figures of speech used by Basavanna draw their content from the external world rather than the worn out usages of the ancient poetry. He creates his Vachanas in different mindsets which are not chronological but concurrent. These are called ‘Sthalas’ in Veerashaiva theology. For instance he could be very hard and critical of other deities and religions in Maheshvara Sthala. But he adopts a very liberal outlook and avers that all religions and Gods are alike in some other ‘sthala’. These are various manifestations of the same personalities in different situations. Vachanas of Basavanna do not have only human beings at their nucleus. He is genuinely concerned for all living things. (sakala jeevaatma)

The fact that Basavanna took his examples from every day life results in some very interesting comparisons. For example, no one can imagine a sweet, healing thing like ‘bhakti’ to be called a snake in a pitcher:

Don't you take on
this thing called bhakti:

and it cuts again
when it comes.

If you risk your hand
with a cobra in a pitcher
will it let you
pass?

The point here is that devotion to God would change one’s life. The poet wishes to warn the prospective devotees of the possible dangers in the path of ‘bhakti’ in order to be fair. That is the spirit of this poem. The shock that the reader gets in reading this poem is very much intended. Once bitten by ‘bhakti’, the ‘bhakt’ would not have any way out.

This is the world of Basavanna, full of delightful surprises, original vision and revolutionary zeal. This 12th century Kannada poet exuberates life. The best part is that he is his own master; he is not chained by the heavy past. Many contemporary thinkers have expressed the view that India has little scope of enterprising thought processes as she is the land of ‘samhitas’, ‘shastras’ and ‘vachanas’. Everything has already been thought out. Life in its most detailed schemes has been chalked out. What to eat, when to sleep, whom to marry, how to sit- everything has a code. Many scholars have found it suffocating. Dominique Lapiere in his ‘City of Joy’ says that a law-abiding Hindu is not required to take even a single decision in his life. Tearing all this confusion apart, we have this revolutionary poet way back in the 12th century who is actually questioning everything, including caste, formal religion and rituals. There is an inherent pattern of reason and logic in his works. He believes what he sees. He says what he feels.