Amongst the Himalayan states Uttarakhand is the youngest one. The state is like a growing child attaining growth rapidly. One wonders to ponder over a poser ‘growth at what cost?’ Since last monsoon several kilometers of roads have been washed away and hundreds of people lost their homes. The landslides left scores of people and cattle dead. What was their fault? They paid the price of development.

Alas, the story does not end here. Development has to continue and one wonders how many more people will be sacrificed for the purpose!

Recently, S.P. Sati, Y.P. Sundriyal and Naresh Rana of Geology Department, HNB Garhwal University, Srinagar (Garhwal) and Surekha Dangwal of the English Department of the same University joined hands to survey and assess the landslide damages along the National Highway between Rishikesh and Mana in Garhwal. Their study makes one think again and again the same issue ‘development at what cost?’

The route they surveyed used to be in the days of the yore a foot track for pilgrimage to Badrinath. For the reasons of security and also to cope up with the pressure of the pilgrims a motor road had become a must. Initially the road was a single lane and for certain patches one had to wait, as there was one-way traffic. But it was not enough. In the days of fast communication one could not afford to wait endlessly for the gate to open to allow the traffic from the opposite side. The road was widened. The process continues even now and road widening is at a fervent pace since Uttarakhand attained statehood.

The mountain slopes are always on the verge of movement. As long as they are allowed to maintain their angle of repose they remain considerably stable. But a road widening, toe cutting due to river erosion, a slight tremor due to an earthquake and other construction activities all lead to a slide. In case it is raining, water flowing down the slope acts like a lubricant. Part of this wate rseeps in and continues to flow down the slope, soaking lose unconsolidated soil and rock fragments in its wake. This muck gains extra weight due to mass of water and aided by the gravity starts sliding down.

Compared to other mountain chains of the world, the Himalayas are the youngest and surprisingly they are still ‘growing’. This is because the Indian plate is constantly pushing under the Asian plate. The stresses caused in the process get released periodically through earthquakes. However minor, tremors recorded by the sensitive seismographs every day are powerful enough to enhance the prospects of a landslide, especially during the rainy season. Such tremors if they occur are unavoidable. However, the worst culprit for the recent landslides in Uttarakhand is the road widening process.

It was unfortunate that there was a heavier rainfall during the rainy season of 2010; especially the torrential downpour from September 18 to 21 was terrible. During the season 285 people lost their lives, out of those, 65 people died in the torrential rain of those four terrible days in September. Nearly 534 houses were razed to ground. Later it was found that the region had received 336% higher rainfall than previous years only in the month of September. Was it a natural calamity of a higher degree or was it aggravated by the human induced activities? The researchers of Garhwal University tried to seek an answer to the poser.

Surveys carried out by S.P. Sati et.el revealed that the places where landslides occurred along the highway NH-58 were those where road widening was in process. Mountain slopes are not just formed of its own. They are there as a result of complex geomorphic processes. Of these, mountain building process or endogenic process and action of water on the rocks-exogenic process are the ones which build the slopes painstakingly over the years. Road widening process comes as a rude shock to the slope forming material, because it disturbs the stability as aresult of blasting or sudden removal of the toe of the slope. The mountain mass thereafter becomes vulnerable for downwards movement.

The quality and type of slope forming material play a major role in the occurrence or otherwise of landslides. The region studied by Sati and co-workers lies in the transitional zone between the Lesser and the Higher Himalaya. Rocks of this zone are micaceous and fissile. This zone is dominated by steep slopes, focused rainfall (cloud bursts) and frequent tremors. All three factors are against the slope stability.

Slope failures are not new to Himalayas. To cite a few examples, the memories of 1970 landslide that induced flash floods in Alaknanda Valley, the Kanodiya Gad (Bhagirathi Valley) landslide of 1978, the 1998 Malpa and Ookhimath landslides in Kali and Madhyamaheshwar valleys, the 2003 Varunavrat landslide at Uttarkashi, and 2009 Munsyari Landslide are still fresh in the minds of local residents.

The Malpa and the Ookhimath landslides were ghastly. Malpa landslide took a toll of 380 lives - all pilgrims to Kailash-Masarovar. A celebrity, Protima Bedi, a noted Indian dancer was one of them. The GSI team which went there immediately to survey and work out the causes of landslide etc. was appalled to see the yellowish fluid oozing out of the landmass which had buried the camp. This was the fluid from the decomposed mule bodies buried under the rock slide. The Ookhimath landslide was so forceful that the slide mass went across the valley and hit some of the houses at a height of 50 m on the opposite bank said the preliminary report of GSI. Both the slides were triggered by excessive rains and lack of proper drainage. The site of Malpa was notorious for rock fall. That is why the PWD Rest House constructed in the British days was on a spur safely away from the slide zone. Despite that the PAC personnel camping there had a harrowing night as rock fragments constantly hit the tin roof of the Rest House. The noise of the slide was so loud that people first thought it was an explosion.

The landslides of 2010 will again go down the memory lane, because they took away many lives and disrupted the communication lines badly. The problem has aggravated due to shortage of land for construction of houses. The roads are stressed in Uttarakhand as 2-3 lakh vehicles carrying pilgrims to Badrinath and Kedarnath ply on these roads and also heavy machinery has to be moved because many small hydropower projects are coming up. The existing roads are incapable of taking the brunt any further. But the problem is that movement of vehicles on these roads cannot be stopped. Vehicles traversing long distances need to stop at places to offload or take on board passengers and also for rest and refreshment. Thus a large number of shops have come up on the road sides-that means again the slopes have been disturbed. 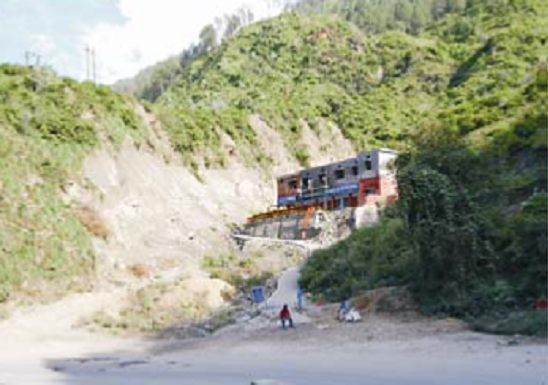 Education is vital for development. Uttarakhand is not lacking behind in this endeavor. But sad part is the school buildings are located at spots which are vulnerable for a landslide and innocent kids are exposed to great risk.

Thus there are avoidable construction activities and unavoidable ones too. Before starting a project even if it is a simple road widening project a detailed survey of the rock mass along the road is required to be carried out to work out potential threat areas. There are engineering techniques to take care of the lose exposed material from slipping down. In short proper studies and proper precautions are required to tackle the landslides instead of tearing across the mountains with heavy machinery to build roads, dams etc.

Development of the state is important but the lives of the people are more important. Therefore it is better to develop with care and in harmony with nature.

Images courtesy Current Science, India
1. Roadside houses in Devprayag on NH-58 have become vulnerable to landslide as a result of road widening.
2. School was allowed to be constructed on landslide debris on the bank of a stream, jeopardizing lives of innocent kids.