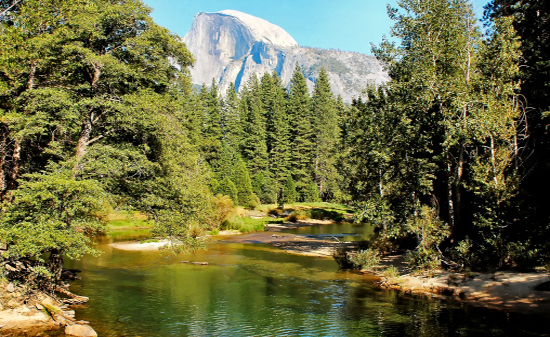 The gushing stream of water was like a real work of art, its sound was like the sound of music and the scene was like that of a “Kinkade”. I could sit there and meditate or dance or just jump up and down to the rhythm, but I kept walking holding hands with my Vijaya.

We were on a steep climb 1.5 miles long and my energy level suddenly spiked up, everything – the river, the flow, the sound and the scene, all were so conducive for me to become extra energetic. The river by the side and trees on the shore and rocks – big rocks, really big – surrounding everything, just captivated me like nothing else ever has. Slowly but surely we climbed, encountering everyone who was coming down the trail with a look of anticipation on our faces and their silent response telling us you will get there. We just kept on moving. It was tiring to climb up on that almost a vertical climb, and we were getting tired very fast, not only tired but exhausted. Our hearts were really pumping hard making a sound as if Ringo Starr was really beating his drums to a fast wild rhythm. 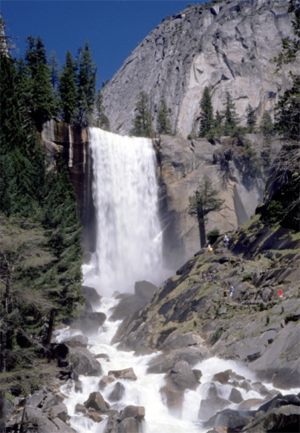 I thought many a times will it be safe to continue at the pace we were, when suddenly we decided to sit on a rock that looked like a bench, carved by many many others who over many years had the same thought at the same spot, an urge to sit on that rock – that now looks like a bench.  An old couple was coming down and gave us a friendly smile. I asked them, “How far is it?” They could feel my anxiety and could tell we were already exhausted. It was obvious they too had asked the same question and at the same spot sitting on the same rock when they were climbing up.  “Just keep on climbing you are almost half the way up there”, they answered with a twinkle in their teasing yet encouraging eyes.  I could just die; I had expected they would say, “Oh you are almost there!”

Expectations always disappoint and one should never ever expect anything – “Do not look for the Phala of any Karma”, Shree Krishna has said that in the Holy Bhagavad-Gita. And suddenly I became very spiritual. The surroundings were conducive for that too – to be spiritual. There are not many places on the Mother Earth as beautifully awesome and exquisitely alluring colorfully green lush and yet a bowl of massive rocks as is the Yosemite Valley. There is hardly any other place where one can see as many gorgeously beautiful waterfalls as in the valley. God must have created this place to let everyone know that He is an artist and I called it Shiva’s beautiful artwork as I could see right next to the Half Dome another peak that looked like the Shiva LInga. 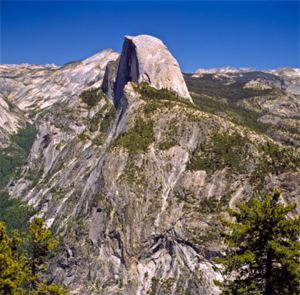 So we continued without thinking how far and how difficult. We knew what we had to do, and the direction to follow, and that is all we needed. Climbing was not easy, although all it took was to lift one foot and put it ahead of the other.  Each step was getting much harder to take; and from my usually long stepped gait I slipped in to walking like a two year old, I had to walk holding her hand which became the source of my strength and inspiration.  I was like a two year old stopping at every juncture saying WOW! The awesomeness of the place was enchanting and yet scary, the massiveness of the Rocks was unbelievable, and the River reminded of the holy Ganga of the mountains. Suddenly my childhood came back alive. I grew up in the mountains and had always played in the shadows of the majestic Deodars in the Shivaliks of the divine Himalayas.  The rivulets and the fountains and flora and fauna were once again in front of me.

The majestic Redwoods, dwarf the Deodars, 200 feet tall and 5000 years old Redwoods have absorbed and observed a lot and have seen many faces. Looking in the web I found the following and I quote: “For tens of thousands of years, humans have changed, and have been changed by, this place we now call Yosemite. The Ahwahneechee lived here for generations, followed by the arrival of Europeans in the mid-1800s.

The rugged terrain challenged many early travelers, with just a few – only 650 from the mid-1850s to mid-1860s – making the journey to Yosemite Valley by horseback or stagecoach. By 1907, construction of the Yosemite Valley Railroad from Merced to El Portal eased the journey, thereby, increasing visitation.

Today, 3.5 million people enter the park’s gates to explore. We learn from the stories of those who walked Yosemite’s trails before us, allowing appreciation of their lasting footprints that led to conscious preservation. Seven present-day tribes descend from the people who first called this area home. As Europeans arrived in the mid-1800s, violent disruption ensued that displaced the native populations. Early white settlers arrived and hosted writers, artists, and photographers who spread the fame of "the Incomparable Valley" throughout the world.

Within Yosemite’s history, various cultures abounded that left a mark. Historic mining sites remain from miners who came to the Sierra to seek their fortune in gold. Early lodging establishments, like the Wawona Hotel, offered a more primitive setting for the Valley’s first tourists and today's visitors, and more elegant lodging, like The Ahwahnee, was added to satisfy those looking for comfort.

History books detail the Mariposa Battalion entering Yosemite Valley in 1851 to remove the Ahwahneechee. As Euro-American settlement occurred, people arrived on foot, on horseback and by rail to rustic hotels. Parts of the landscape were exploited, spurring conservationists to appeal for protections. President Abraham Lincoln signed an 1864 bill granting Yosemite Valley and the Mariposa Grove to the State of California. John Muir helped spark the creation of Yosemite National Park in 1890”.  Finish quote.

And we kept on climbing finally reaching our destination a wooden Bridge over the gorgeous and mighty Merced River. From the bridge we looked at the Roaring Fall -  the awesome but infamous Vernal Falls.  Only a few days ago three tourists took a chance and not realizing the fearsome power of the torrential water in the Merced River stepped in it and were swept away – not to be seen again. Sometimes the most beautiful tempts and temptation always ruins – so said Krishna in the Holy Bhagvad-Gita. I was spiritual that day thinking about the tragedy, the beauty and the temptation.  And Lord only knows how many over the years have been lured by the beautiful spots all along the  Valley – never to come back again – falling from the cliffs of the Half Dome or drowning in pristine rivers and their falls. Yosemite is so beautiful that one has to see it to believe it and me – I can go there at the drop of a hat.

And quoting again – “If there is heaven on earth –This is it, This is it.”  If all the water of every ocean was ink, and every redwood tree was made into a pen and Goddess Sarswati wrote all day and night for ever –it is not possible to describe the awesome beauty of Lord Shiva – who I felt has created it in his image as the most beautiful work of his art. Go see it and be careful do not succumb to temptations.