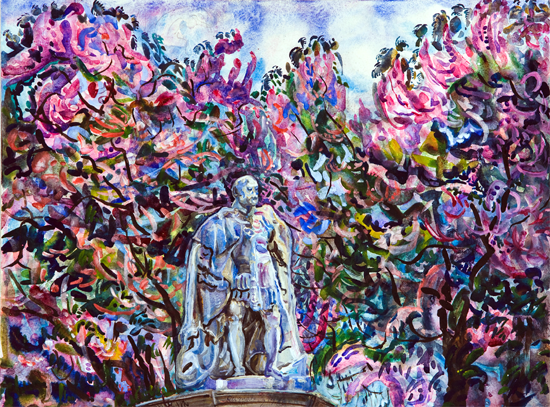 King Edward in a blaze of pink Cassia that seems to descend from the skies, framing him and falling as natural screen to a park front is a perfect living annual installation in the city of Bangalore. Every summer going past the park near the Minsk square, named for whatever reasons, the blend of flowering canopy truncated with that one statue draws gasps.

It’s definitely caught the photographer’s eye in recent times but to think the same flowering cassia trees caught landscape artist Rumale Channabasaviah’s (1910-86) eye made me gulp at the power of visual imagery in the cityscape.

To view eighty paintings mostly landscape at Rumale Art House is to literally walk into a wooded patch with large shady trees. To find the way back one has to leaf through memory and recognize even if faintly, the arboreal growth in the city landscape. A familiar curb with a rain tree, an avenue of gulmohar trees, the red bricked façade of the high court fringed with yellow jacarandas and purple tabubia. It also calls for a stop by the tall trees and lush greens of the Lal Bagh even as the realization seeps in of being dwarfed by a canvas.

Bangalore was Rumale’s (1910-86) inspiration. He would roll his canvas and take it to Lal Bagh or just set up his easel on a shaded road and paint. He never “He never mixed his colours in a palette. “He would paint directly onto the canvas boldly. He painted this picture in Lal Bagh in his later years but notice how unfaltering the strokes art,’’ says Sanjay Kabe who has in his private collection Rumale’s works.

His works span bowers outside his window, façade of the neighbourhood seminary, a ficus in the Hindu temple down the road to more complex paintings. Deeply spiritual he took a year to complete a portrait of his guru in meditation. He painted fields and a temple that were eventually submerged by the Hidakal Dam. His hallmark remains the juxtaposition of the natural world with trace anthropomorphic elements.

The strokes and sweeps of colour are reminiscent of a Van Gogh. The boughs and leaves swaying in the breeze seem to capture the same espirit with art. For Rumale, painting was a spiritual exercise says Kabe who had accompanied the artists to set up his easel on many occasions.  “Art and spirituality intermingled in his work and that is what set him apart from other artists,’ he says.

The detailing in some other paintings like that of the flower of the canon ball tree is with the taxonomic precision of a botanist. The stamen, anther, sepals are clearly seen even as the petals nearly enfolds them.  The petals of this flower resemble the hood of the snake and the stigma is viewed in several cultures as a symbol of creation. Rumale’s choice of flower complete with hooded petals shows his blend of empiricism with an understanding of nature rooted in the Hindu tradition. At the turn of the 20th century the State of Mysore had been renamed Karnataka and there was a strong current of industrialization, science and engineering that Rumale was living in the midst of.

The intersection of human activity with that of nature forms the hallmark of many of his works. Purple jacaranda and yellow blossoms falling over the red façade of the high court are among the artist’s prominent works.  Flowering trees like tabubia fringe walls of homes adjacent to which are a flight of steps, at other times its an aerial view of canopy. Rumale enjoyed painting park scenes of various trees, a glen with benches and a few people dotting the vista.

Bangalore of Rumale’s time was verdant. The mix of big canopy trees with flowering ones had given it the epithet garden city. Directors of Horticulture, Karnataka, H. C. Javaraya and C. Marigowda both contributed to innovation in their time. T P Issar in his book Blossoms of Bangalore also credits their predecessor superintendent of state gardens Gustav Herman Krumbiegel (1885-1961) with giving urban horticulture a character of landscape architecture. “Giving flowering trees a place in the city created aesthetics as only a poet-painter could have done.’ Arbor culturists planned the shading to meet the ecological needs of a fast growing city in terms of human and vehicular population but also an imaginatively planned ambience of sequentially blossoming trees notes Issar.

“Each flowering tree comes alive with its part in season.’’ In Jan-March the city is swept in golden yellow of tabebuia. In the summer months brings out the gulmohar, cassia and Pride of India. The monsoon is the time for sampige or champak and the parijata considered one of the celestial trees in Hinduism. In October the city is a scarlet-orange with the Tulip tree in blossom. In winter the setting changes to the blue of the jacaranda and yellow of the early blossoming tabubia’s.

Tabebuia and Jacaranda had also caught the eye of another of Bangalore’s landscape artists M S Chandrashekhar. His watercolour of these trees overlooking the bandstand is among the city landscapes on canvas that stand out. His “Casia Spectablis Avenue” is a very whimsical canvas in yellow, green and blue. Bangalore landscape is not complete without the Kempegowda tower at Lal Bagh another of Chandrashekar’s work.

Like the tower that was one of the city’s markers and remains as a relic, landscape art of once richly foliaged Bangalore is a vignette of living landscape. Today, however, urban horticulture along with the trees rests in peace, but for a namesake solitary bouquet.