With barely a month left for the global climate change negotiations in Durban, China is been hosting the ninth BASIC (Brazil, South Africa, India and China) ministerial meet Oct 31-Nov 1. Representatives of the countries of Group 77, island countries and the Arab League also attended the meeting.

A meeting of experts will be held alongside this meeting to carve out a strategy for the United Nations Framework Convention on Climate Change (UNFCCC) Conference of Parties 17 (COP 17) to be held in Durban, South Africa, Nov 28-Dec 9. Politics of Green and climate change issues are been discussing in this Beijing meeting, Forest as major source of climate play important role in climate change and have great significance.

Forests have four major roles in climate change: they currently contribute about one-sixth of global carbon emissions when cleared, overused or degraded; they react sensitively to a changing climate; when managed sustainably, they produce wood fuels as a benign alternative to fossil fuels; and finally, they have the potential to absorb about one-tenth of global carbon emissions projected for the first half of this century into their biomass, soils and products and store them. 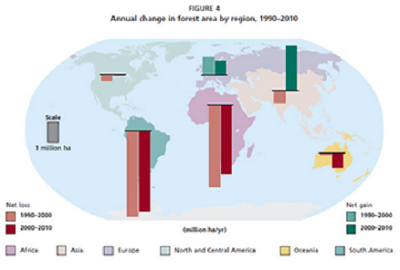 “Forests and trees on farms are a direct source of food and cash income for more than a billion of the world’s poorest people,” Food and Agriculture Organization (FAO) Assistant Director-General for Forestry Eduardo Rojas-Brails said.

“They provide both staple foods and supplemental foods. To enhance these benefits, governments and development partners should increase investments in support of sustainable forest management and rehabilitation of degraded forest lands,” he added, noting that in India, more than 50 million people depend directly on forests for subsistence, while in Laos wild foods are consumed by 80 per cent of its 6.4 million people on a daily basis.

Forests can play an even greater role in feeding the world with products ranging from vitamin-rich leaves to fruits and roots. According to the U.N. Food and Agriculture Organization (FAO), there were 4.033 billion hectares of forest or 31% of total land area standing in the world in 2010. That's down slightly from 2000.

With 1 billion people suffering from chronic hunger, the role of forests for timber must not overshadow their important contribution to feeding many of the world's poorest communities, and their over-exploitation for wood must be curbed, according to the Collaborative Partnership on Forests (CPF), a 14-member group which includes several UN agencies.

The story of the world's forests is usually a depressing one. Tropical rain forests are under pressure in South America, Asia and Africa, threatening habitat for countless species and adding billions of tons of carbon dioxide to the atmosphere every year. but the good news is that the rate of overall forest loss has slowed considerably, dropping from 8.3 million hectares lost a year in the 1990s to 5.2 million hectares a year, thanks in part to significant reforestation taking place throughout much of Asia.

Women also play an important part in the processing of tree and forest products, the income from which helps their families achieve food security. For instance, women use shea as a cooking fat and food accompaniment in West Africa. The harvesting and processing of shea, which is an important ingredient in chocolate and other confectionery, provides rural women with nearly 80 percent of their income.

Emmanuel Ze Meka, Executive Director of the International Tropical Timber Organization, noted, "Food products are the fastest growing component of non-timber forest products in many tropical countries. And adding value to the forest makes it more likely to remain forest rather than converted to other uses."

As a part of the developing world, BASIC countries hope to reach consensus on climate change through candid and deep discussions to lay the groundwork for the upcoming Durban conference, Xie Zhenhua, vice minister of the National Development and Reform Commission, also China's chief negotiator of climate change  also attend the meeting. This was the six meeting of BASIC Countries Hope finally the might agreed on some environmental friendly solutions that must be practicable.