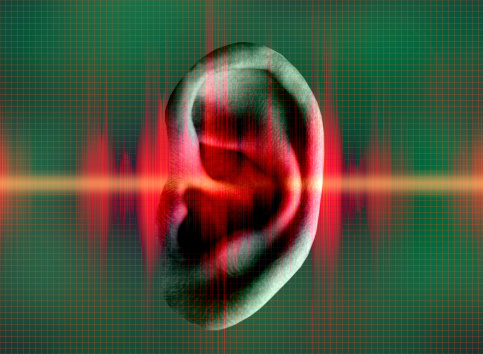 When talking about pollution in general people usually refer to air and water pollution neglecting the global threat of noise pollution. They seem to forget or are not aware of the fact that noise pollution is disturbing life of all biota present in ecosystem.

Urbanization, economic growth and motorized transport are some of the driving forces for environmental noise exposure and health effects. Environmental noise is defined as noise emitted from all sources except industrial workplaces.

The response of the human ear to sound depends both on the sound frequency (measure in Hertz, Hz) and sound pressure, measure in decibels (dB). The WHO guidelines for community noise recommend less than 30 A-weighted decibels (dB(A)) in bedrooms during the night for a sleep of good quality and less than 35 dB(A) in classrooms to allow good teaching and learning conditions.

The WHO guidelines for night noise recommend less than 40 dB (A) of annual average (L night) outside of bedrooms to prevent adverse health effects from night noise.

Noise has become a very important "stress factor" in the environment of man. The term "noise pollution" has been recently used to signify the hazard of sounds which are consequence of modern day development, leading to health hazards of different type.
Continuous exposure to high decibel noise can result in some adverse effects on your health. One of these hazards is acoustic trauma to the ears caused when they are subjected to the sound of an intensity of 85 dB or more without respite.

The health hazards of noise pollution can be categorized into physiological and psychological hazards. While the former includes hearing loss, hypertension, disturbance in sleep patterns etc., the later includes problems such as annoyance, aggression and stress.

Noise induced hearing loss is one of the most harmful effects of noise pollution. More importantly, these harmful effects of noise pollution are not just restricted to human beings, even animals has to bear the brunt of the same. Studies reveal that the increase in the noise levels beyond a certain extent tends to interfere with the communication of the animals, thus resulting in disturbance in their various life processes which is also true for us.

It is generally accepted that the link between excess noise and hearing loss is obvious. But this fact is supported by epidemiological studies that compared the prevalence of hearing loss in different categories of occupations, or in particularly noisy occupations. Although other factors may also contribute to hearing loss, such as exposure to vibrations, ototoxic drugs and some chemicals, the association with noise remains robust after accounting for these influences.

Although most developed nations have government agencies responsible for the protection of the environment, no nation has a single body that regulates noise pollution. Transportation noise is usually regulated by the relevant transportation ministry, health-related work noise is often regulated by health ministries and worker’s unions, and entertainment noise such as loud music is a criminal offense in many areas. Little is currently being done to reduce noise pollution in developed countries.

Impact of Noise on Aquatic Animals

Some scientists believe that noise pollution could have a negative impact on the entire marine food web chain. One of the latest studies by the Technical University of Catalonia in Barcelona showed that dolphins and whales are not only marine animals seriously affected with noise pollution as squids and octopuses are also experiencing massive acoustic trauma because of the increased noise pollution in our oceans.

Impact of Noise on Birds

Some people just want some peace and quiet, and apparently, so do the birds. The University of Colorado at Boulder has conducted a three-year study that proves in July 2009 that noise pollution affects birds and their habits. The biggest problem that birds face when there is too much noise is their ability to communicate. Birds that vocalize at lower frequencies are easily drowned out by noise pollution, affecting their ability to attract a mate and socialize with the other birds in their community. But finches and other birds that vocalize at a higher frequency appear uninfluenced by the hustle and bustle of noise pollution--apparently ignoring the mass exodus of their fellow, winged friends.

“When bombarded by noise pollution, some male birds begin to sing higher tunes and that tonal shift makes them less attractive to females”. Said Wouter Halfwerk, a behavioural ecologist at Leiden University in the Netherlands. "It could very well be that noise pollution is interfering with reproductive decisions by females." Previous studies have shown that a variety of birds can suffer when they change their songs, said Erin Bayne, an ornithologist at the University of Alberta. The new study is one of the first to explain why.

Most recent in human beings the major negative impact is insomnia which is root cause of many diseases, although more research is in progress.