When the Garden of God trembled 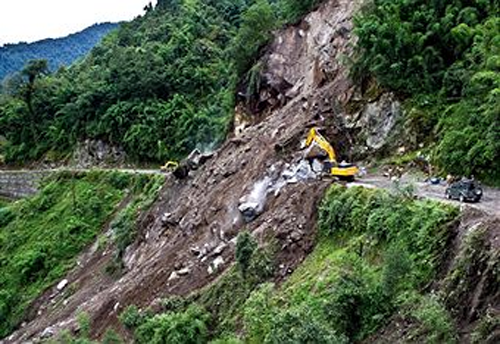 Indian Army personnel and Border Roads Organisation (BRO) workers
clear a landslide at Phengla on the outskirts of Gangtok on September 20, 2011,
after a 6.9-magnitude earthquake hit the region September 18.

Sikkim, the landlocked, second smallest state of India situated in the Himalayas bordered by Nepal, Bhutan and Tibet is known in the Hindu religious texts as ‘Garden of the Lord Indra’ or literally ‘goodly region’ says the Wikipedia. Serene and exquisite Sikkim was shaken by an earthquake of magnitude Mw 6.9-known as North Sikkim Earthquake. Lord Indra, as per the Hindu belief is the one who controls the storms and is also referred as the War God!

In other words this beautiful region has been facing the turbulence and tremors since ages. Being in the frontal zone of the collision between the Indian and the Asian plates, tremors are common in the area. It was some 77 years ago in 1934, a great earthquake of magnitude 8.3 took place in a region southwest of Sikkim, on Nepal border. This earthquake caused intensity VIII damage in the Sikkim Himalayas say Kusala and C.P. Rajendran, N. Thulsiraman and Ronia Andrews of Centre for Earth Science, Indian Institute of Science, Bangalore and Nima Sherpa of Department of Mines, Minerals and Geology, Gangtok, India.

It is interesting to know how much damage an earthquake of intensity VIII can do. As per the Modified Mercalli scale of earthquake intensities, an earthquake of intensity VIII is considered to be destructive earthquake. Damage to specially designed structures is slight; considerable in ordinary substantial buildings with partial collapse. Damage is great in poorly built structures. Fall of Chimneys, factory stacks, columns, monuments, walls. Heavy furniture gets moved. 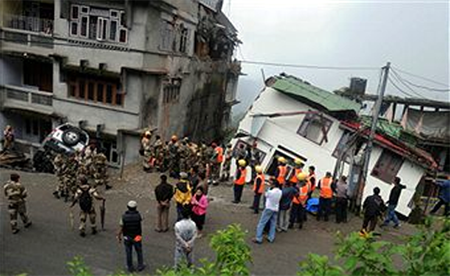 Search for victims after two multi story buildings collapsed on September 23
and left at least four injured, in Gangtok on September 24, 2011.
The houses collapsed in heavy rains and it comes days after
the September 18 earthquake in Sikkim that killed around 80 people in the state. 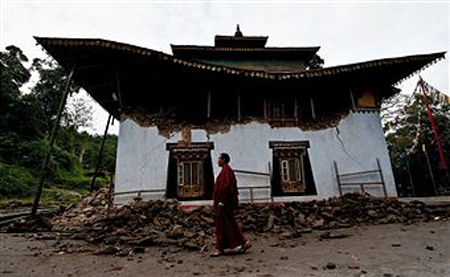 A Buddhist monk walk past the damaged Ringhim Monastery in Mangan
on September 21, 2011 after a 6.9-magnitude earthquake hit the region September 18. 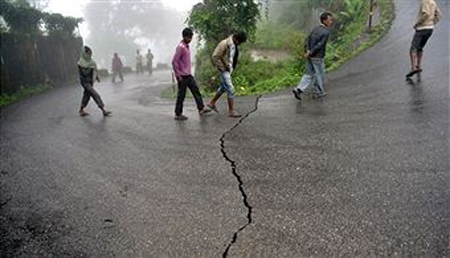 People walk past a crack on the road in Gangtok on September 19, 2011
after a 6.9-magnitude earthquake hit the region 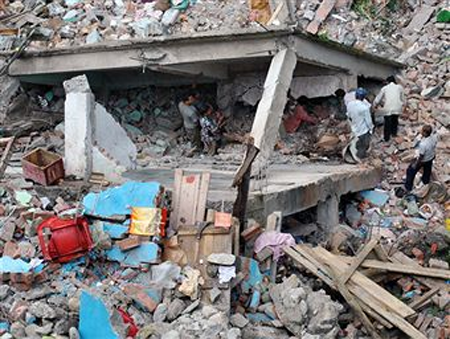 Locals and rescue team personnel search for bodies
trapped in the debris of homes after the 6.9 earthquake
in Dikchu about 20 km from Mangan on September 20, 2011.

In September 2011 as north Sikkim and eastern Nepal shook tremors were felt in many parts of the country, especially north India.This earthquake took a toll of 100 lives, damaged buildings and roads and communication towers. The post-earthquake landslides caused rock falls and took more lives. Toppling of communication towers impaired the communications and also the rescue operations. The communication towers a boon in normal times but they can be a great hazard in case of an earthquake-read ‘Towering Terror’, boloji.com, April 11, 2011. The earthquake damage was not restricted within the political boundaries of Sikkim. In Nepal a wall of the British Embassy collapsed, killing one man. Similarly reports of damages from Bangladesh and Bhutan also poured in. 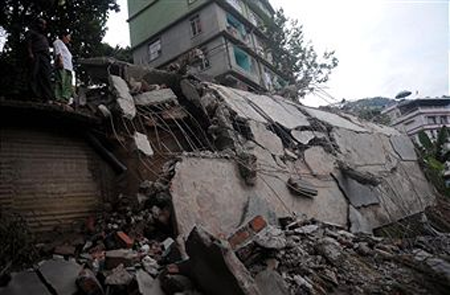 A look at the derbis of fallen buildings in Chumsey
on the outskirts of Gangtok on September 21, 2011.
The 6.9-magnitude quake on September 18 struck the border
of India's northeastern state of Sikkim and Nepal,
bringing destruction to towns and villages on both sides
as well as in southern Tibet and the tiny kingdom of Bhutan.

Armed with information about the past damages and freshly collected data about the recent earthquake Kusala and her team tried to find out the reason behind the strong tremors in Indra’s Garden. To get in todepth of the problem they used Global Centroid-Moment-Tensor solution. This method of knowing the condition of the deep seated mantle of the earth is a part of a project founded by Adam Dziewonski, Professor Emeritus with Harvard Seismological Group of the Harvard University. Known as the CMT solutions, helps the seismologists in finding the cause of deep seated earthquake.

In the instant earthquake, the MT solution suggested a thrust fault that occurred at a depth of 20 km. One might think, why should the deep seated rocks be disturbed like this? This is because the dynamic Indian Plate is constantly inching towards the Asian Plate. The constant stress thus generated causes the faulting at the plate margins leading to an earthquake. The Sikkim Earthquake of 2011, according to Kusala and her team is close to the Main Himalayan Thrust (MHT) system. Such earthquakes originate on the thrust faults associated with the MHT which accommodates geological shortening estimated as 21 plus minus 1.5 mm per year, says Kusala.

The north Sikkim earthquake did not spare even the Capital of Sikkim, Gangtok. Fortunately the areas close to the epicenter are sparsely populated, but the drawback for the hazard mitigation teams is thatthe area surrounded by high mountains is not easily accessible.

Post-earthquake surveys by Kusala and her team revealed that village Chungthang was closest to the epicenter and several buildings were found damaged, including the five storied building of Moonlight School. The team found that the older buildings had suffered maximum damage. In all probability these buildings were on weaker foundations!

Though the region is sparsely populated, yet the Sikkim Earthquake is a source of anxiety for many reasons. Firstly the poorly constructed houses are always prone to such earthquakes and it happened here too. People getting buried under their own roof are common feature of such mishaps. The Sikkim Earthquake of Sep 2011 is the largest instrumentally recorded earthquake in the region. The earthquake points to the vulnerabilityof the region to landslides as a post-earthquake phenomenon.

Natural hazards like earthquakes and landslides are acause of worry for the Tista hydroelectric projects nearby. The project can be made considerably earthquake safe, but one cannot possibly hold the entire mountain slopes from sliding down! ‘Urja Colony’ of the project suffered considerable damage. Nearly all the 50 year old houses collapsed due to wall failure, while the recent RCC constructions remained intact. Fortunately the 1.2 km long tunnel of the powerhouse remained intact!

Earthquakes are almost a part and parcel of the Himalayas. Since their occurrence is not frequent, their hazards are generally shelved under the layers of our memory. The Sikkim Earthquake is a reminder that a detailed survey is required to assess the vulnerable areas and to take precautionary measures like retro-fitting or even dismantling or constructing afresh buildings that house many people together, for example the schools. The approach roads to the strategic places like the hospitals also need to be examined from the point of view of possible landslides due to earthquakes.

Earthquakes cannot be wished away. But at least precautionary measures can be taken to ensure safety of lives!