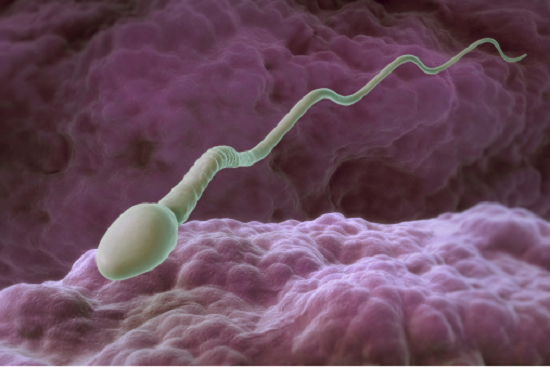 Sperm motility is described as “the ability of sperm to move properly towards an egg”. This “quality” of sperm acts as a factor for successful pregnancies. Sperms which cannot move forward or non motile will not be able to fertilize the egg as they cannot reach it. Hence quality of sperms is more important than quantity of sperms.

Sperms get produced through a process called spermatogenesis. This process takes place inside a man’s testes. The walls of seminiferous tubules play a great role in production of sperms. The sperms thus produced are stored in epididymis (coiled structures present on the upper part of testes) for several days. The sperm use their tails to push themselves into the epididymis and complete their development here. It takes sperm about 4 to 6 weeks to travel through the epididymis.

During ejaculation the sperms are pushed out of epididymis. These sperms pass through ductus deferens, spermatic cord, and prostate gland to urethra. This movement of sperms is aided by peristaltic (contraction and relaxation) movement of muscles of male reproductive system. The seminal vesicles and prostate gland produce a whitish fluid called seminal fluid, which mixes with sperms to form semen when a male is sexually stimulated.

When men ejaculate during intercourse, semen is deposited into the fold called fornix near the cervix (neck of the uterus). From the fornix, the sperms swim their way up through the cervix and move through the uterus. Their movement is aided by uterine contractions. Sperm cells become even more active when they begin to interact with the fertilizing layer of an egg cell. They swim faster and their tail movements become more forceful and erratic. This behavior is called "hyper activation."

Recent studies have shown that sudden increase in calcium levels cause the hyper activation of tail of sperms.

Fusion of sperm and egg:

The egg has two protective barriers. The first barrier is made of cumulus cells embedded in gel like material. These cells develop in ovary along with egg to support its growth. The gel like material is made up of hyaluronic acid. The second barrier is made up of glycoproteins. These glycoproteins form a thick shell around oocyte (cell of egg). The hyperactivity of sperm helps to break these barriers. The head of the sperm carries enzymes which when released weaken the barriers of egg. Then a part of cell membrane of sperm fuses with a part of cell membrane of egg. And then sperm cell sinks into cell of egg. At this point the tail of sperm falls of. After penetration egg membrane becomes impenetrable to other sperms to prevent further fertilization. Through semen analysis the ratio of actively motile sperms to total number of sperms is evaluated. This ratio indicates the quality of semen which determines the male fertility. Low motility of sperm leads to subfertility or infertility.