The Powerhouse Within the Earth 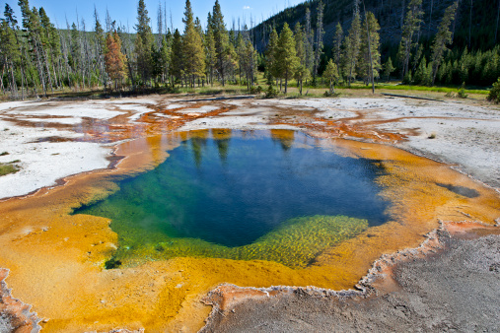 It was some 4578 billion years ago when our planet took birth. With the accretion of material in an exceeding hot atmosphere the core of the earth became a molten mass of metals. To perceive that you have to imagine a blacksmith's hearth and immediately the picture of iron melt being poured into a desired shape emerges in mind. It is an effort to stand close to the hearth to watch all that because of the heat. Inside the Earth’s hearth the metallic constituents remain in a molten state - imagine the quantum of heat stored therein! It is just mind boggling. The heat which melted the earth’s core constituents remained trapped within. This heat at places finds escape to the surface and we see it in the form of geothermal energy.

Apart from the heat trapped deep within the Earth since its inception, there is another source of geothermal steam. Surface water in rocky terrains often travels to great depths through the deep seated faults and fissures in the rocks. At such depths this water comes in contact with super-heated rocks and it forms a geothermal reservoir there. Under certain circumstances this superheated, trapped water seeks an escape and often finds vents in the rocks to reach the surface and emerge as geothermal or hot springs or geysers or fumaroles.

It is well known that we bank upon non-renewable sources for generation of power. Irony is that 70% of our power is generated from coal which is a potent atmospheric pollution hazard. Indiscriminate use of coal, biomass and hydrocarbons puts lots of stress on our already stressed atmosphere. We are facing an energy crisis, because the stock of fuels is limited, best hydroelectric power resources are available in the Himalayas which are prone to natural hazards and the nuclear energy is fraught with perils of possible accidents, safe disposal of nuclear waste and safe decommissioning of the power plants. The remaining sources like the Solar and Wind energy are still in the stage of development and research.

Geothermal energy is in fact quite a potent source of energy, though it is available in localized areas. It is interesting to know that the geothermal energy potential of India is 10600 Megawatts. It is five times more than other non-conventionalenergy resources like the solar, wind and biomass all combined together. But this resource has yet to be tapped.

Uttarakhand Himalaya are part of Central Himalayas in India are endowed with a vast majority of geothermal springs say K.N. Bhardwaj and S.C. Tewari of HNB University, Srinagar, Garhwal, India. Uttarakhand has many geothermal springs which have medium to high enthalpy water. Enthalpy is the heat required to convert agiven quantity of matter (in this case water) to gas/vapor. This energy thus trapped in water can be put to many uses like generating electricity, to heat buildings and to heat water for various purposes.

The Himalayan kingdom of India has about 100 thermal springs with surface temperatures as high as 90 degrees Celsius says D. Chandrasekharam of IIT Chennai. These springs discharge more than 190 tones per hour of thermal water. In the Himalayan region it is believed that 10-15 million years ago granitic intrusions into the Himalayan rocks were especially responsible for the high temperatures. While testing the geothermal potential of Manikaran area in Parvati Valley of Himachal Pradesh Geological Survey of India was able to establish and run a 5 KW powerhouse there. Presence of certain minerals at depths of around 500 m in this area indicated possibilities of surface temperatures more than 90 degrees C.

Although the Himalayan Geothermal province has shown the best potential for power generation, there are other potent basins as well, for example, Cambay, West Coast, Sonata, and Godavari provinces. All these areas mentioned, including the Himalayan province have sub-surface tectonic features indicating plate movement.

It is feasible to use this high temperature steam to move the turbines of power houses installed at site. Various techniques are used for the purpose. For example, Flashed Steam plants world over use high pressure steam to rotate the turbines. The steam condenses to water which is recirculated to the bore hole which was drilled to extract steam. This condensed water when it meets the steam at much higher temperature in the subsurface turns to steam again and it is reused. Dry steam plants are commonly used at places where thermal steam emerges as geysers. The dry steam as it erupts is sent directly to the turbine. Since it comes out under high pressure, often the steam is accompanied by rock fragments. Therefore it is sent to turbine via a rock-catcher to protect it from damage. The third type of plant is the binary power plant. This type of plant is most suitable for Indian conditions. This method uses another fluid which has a lower boiling point than water, for example Ammonia. This liquid as it comes in contact with heated water, evaporates and after a distance it condenses again. This temperature gradient is used to keep the turbine running.

In India a 5kW power plant has been installed by the Geological Survey Of India in Tattapani, M.P. However, all the Himalayan geothermal springs hold the capacity to produce power through Binary power plants. Problem lies not with the geothermal springs but with our mindset. Since this is a non-conventional energy resource we are apprehensive of the results. Even the United States which boasts around 45 functional powerhouses using this energy - still produces only about one percent of the total energy produced. A positive sign in this direction has been that the installed capacity of geothermal power plants has increased from 1300 MW in 1975 to 9372 MW in 2007. It is expected to rise to 11 GW in another four years.

In India the utilization of geothermal energy is still in experimental stage. Sundry power generation attempts have been made by GSI in Madhya Pradesh. It is high time that the government or private entrepreneurs take interest and start using the power house within the Earth. Apart from power generation these resources can be used for aquaculture, growing vegetables in the freezing cold of high altitudes in the Green Houses and even providing heating system to residential houses. The last option can be used by tour operators in the areas where geothermal energy resources are available.