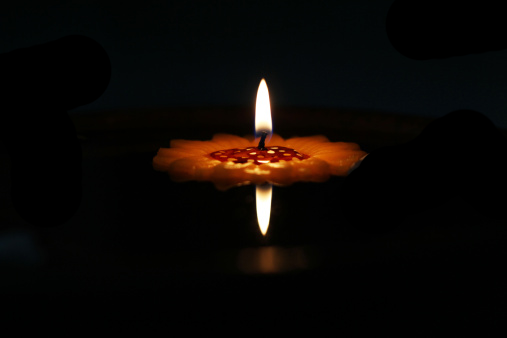 I retain a referential perception of the location I am aware of being in; the various streets in the neighbourhood, the people I know, the greater extent of the city, and so on, to the starry sky. The referential perception in idea form of things and circumstances that are out of sight is not, strictly speaking, objective, but serves as objective, even in the sense of a ‘being given to know’ the true state of things, persons and circumstances, such as they are referred presently to be.

For example, when I think of friends of mine living miles away, I have a reasonably certain idea of their present circumstances, the thought of them yielding imaginative representation of them, say, moving around in their house; and I feel a sense of reassurance. This exceeds scientific certainty, which depends on direct observation, but a certainty that is nevertheless experienced as normal in the circumstances, embracing  most circumstances out of sight, which begs a source of certainty in the individual consciousness; or collectively, which connects individuals in a common perception of identity of circumstances in the ‘zone of now realisation’ each participates in.
The intuition of certainty as to what is out of sight yet commonly known to be, lends validity to the intuition one has of God – that one knows God exists beyond the direct evidence of perception. Of course, it may be argued that one can ultimately prove that something exists by tracing it in the real world, and on that basis its existence is assumed; however, the certainty of its existence out of the range of perception is one assumed rather than directly observed; one that is ‘given’ or impressed as an idea of what is, which reasonably begs a source of such impression.
The source of the impression of common knowledge of identity (as certainty) in what is the collective individual zone of now realisation, shared by a group of people, even remotely connected, could be reasonably postulated to be an invisible agent, identified here as an intelligent being or angelic spirit - begging only the definition of an angelic spirit and the mechanics of its entry and action in the individual or collective zone of now realisation; though the impression would indicate the reality of the influence of spirits. Science cannot explain how ideas are formed, except as effects of linking of brain cells, linking various human faculties to specific areas of the brain, and thus to have a physical basis for the formation of ideas; ironically, it loses its way when dealing with the question of subject knowledge.
Restricting ourselves to the effects, ideas as communicated by angelic spirits, beyond the extant powers of science to prove to the contrary, we can at least postulate that spirits communicate an idea of ‘that which is’, as a certainty, in the common awareness of a community of subjects, whether human or animal, each subject participating in a common zone of now realisation, one that is common to each species; in which the individual is oriented to the others of its kind through perceptive realisation communicated by an angelic spirit as an ordering principle. One gets the impression when viewing great numbers in a particular species of insect or animal acting in co-ordination, be they of bees or bats or buffalo, of guidance in a common principle of action that, one has to realise, acts in the individual awareness.
The living form subject is a now realisation zone, which in collective awareness with others of its kind is experienced as a common zone of now realisation.
Thus something realised in common perception appears to be in this collective zone of now realisation, whereby it is commonly identified. It is suggested spirit acts, as demonstrated by the effects, in the zone of now realisation, communicating to subjects in a collective group as in one act of realisation a common experience of circumstances. The individual retains its individual realisation of circumstances, which is distinct, but is influenced by a collective realisation in which it both knows and is known.
In a typical street scene milling with people, there is an assumption, not consciously realised, that what I perceive, what is impressed upon me, is that commonly impressed on everyone present: true, it is one made evident by the objects themselves being present to common perception: the road, the traffic, the shops, the buildings, the railway bridge, the individual persons moving about; and all the typical forms of activity going on. The impressed realisation in all its generality of image constitutes ‘that which is known’ in each person in any given set of commonly perceived circumstances; but that in the individual there are idea form considerations relating to personal circumstances.

For example, that one is on the way to catch a train and is preoccupied about thoughts of making it in time; another is looking for a particular thing to purchase from a shop; another is pre-occupied about a family matter; generally, that everyone there is in transit with thoughts associated, which differ from individual to individual in the particular, however much they may appear to be common in the wider simple impressed perception of circumstances, such as is assumed by each person to be a common impression, into which everything is blended in the variety of forms and actions; particularly, the impression of public order, and how one feels obliged to act in a manner that is perceived to be a common constraint on all behavior. For this reason, it can be reasonably attributed as an influence of a spirit in the collective individual now of realisation, affecting each in a commonly identified right idea of circumstances. Thus, in the context of one’s own awareness of oneself, an individual in the group, there is a principle impressing rightness of action; in the context of the group awareness one retains there is likewise a principle determinative of who one is and how one should act.
Personal thoughts are in the nature of an impression in each subject awareness, as to who one is, as to what to do, of identification of something perceived, even of group awareness. Because these impressions occur within one’s awareness, they are assumed to be of who one is; and manifest a personal intelligence and emotional response, according to which one acts. Little or no consideration is given to the fact they appear to be of the nature of impressions, suggestions or inspirations, on an individual plane, as occur to one in an occasion of need, an inspired solution to a problem, a sense of urgency to act, or a sudden reminder, say; or on a collective individual plane, as determining right order of action, say, when driving a car, that is impressed on all drivers.
The clearly impressed idea is immediately assumed as one’s own, and claimed as this in communication with others, for example, in such phrases as ‘it suddenly occurred to me…’ or ‘in a flash the solution came to me…’ These impressed ideas, both of what to do individually, and how to behave in a collective context, can also be understood as communications in the zone of now realisation from spirits, in the common understanding of that term, which are not explicitly reckoned because imperceptible in form, but which may be implicitly acknowledged in the effects, as suggestive influences, the devil in temptation, say; or influences realising principles of justice and rightness, both as swaying the individual, or the individual in a group with a common realisation of principle as evidenced.
The net effect, despite the evidence of idea impressions, would be obliviousness to the presence of angelic spirits acting in the zone of individual now realisation; but that would yet continue to act, impressing ideas of principle in the individual’s realisation of perceived circumstances, and collectively, in a group of individuals. The familiar notion of a guardian angel comes to mind, as guiding its host through the latter’s own perceptive process, even subconsciously. In denial of spirit agencies, the credit, or blame, in the case of evil suggestions, is attributed to the human subject that manifests the action, or the occurrence in the mind as pure chance ideas that may be expressed as ‘I wonder where that notion came from…’, which at least potentially acknowledges another source of influence acting in one’s own mind or now realisation, but in fact insinuates a natural self-causative source that excludes a spirit source. Evidence of the individual realisation as part of a group, or group realisation of principle, is simply assumed as a natural phenomenon – not realising spirits are influences in nature.
There is already a well-established notion of the influence of spirits both in the mind, as sources of suggestion in ideas, and in nature, as manifested in control over natural phenomena; but these spirit influences have largely been undermined, deemed superstition, by the advance of science, which for all its analytic powers, is incapable of defining ideas, perceiving only what is in effect the material based reality of neural connections, but in terms, ironically, of identity, which is a concept.  The intelligent effects of spiritual beings in the zone of now realisation of each mind, as communicated impressions of certainty, both subject and through subject of the group, are ignored and put down to being solely the spontaneous, albeit as yet inexplicable effects of the materially based mind.