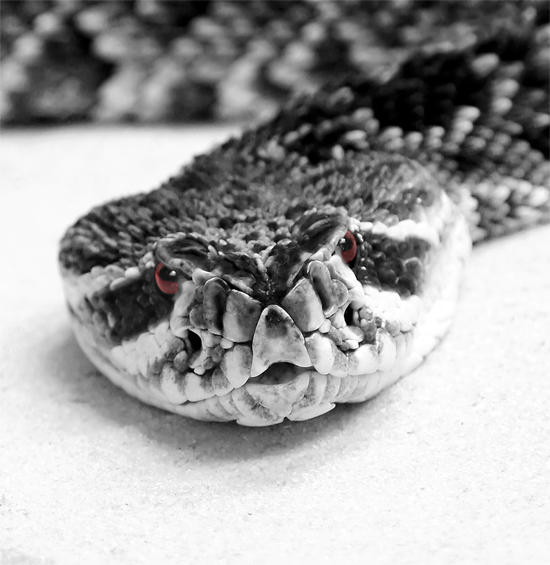 In the still sands of Nevada’s Mojave Desert the distinct sound of the rattle echoes as an eerie warning to those crossing path with the well known rattlesnake. One of the most fascinating species inhabiting most of the Americas, the rattlesnake is counted as one of the most venomous snakes from the pit viper family. There are approximately 32 identified species of which the United States accounts for 17 of them along with several subspecies. From the prairies to the desert, the rattlers can be found adapting to their unique environment. Although distinct in color, all rattlers have the common characteristic of wide triangular head and the infamous jointed rattle at the end of their tail.

The rattle is a defense mechanism to keep predators at bay and can last almost three hours.  Interestingly, to prevent damage to the rattle it is kept off the ground. But as it glides across the landscape the ending parts of the rattle do tend to break off making it difficult to ascertain the true age of a rattlesnake.  Unlike the female rattlesnake, the male has a broad long tail that gradually begins to taper to the tip.

The average size for an adult rattlesnake is not more than 4 feet in length. But its appearance is terrifying and yet mesmerizing as the mostly intricate geometric designed scales is accentuated by piercing “cat-like" eyes and forked tongue. In captivity, most rattlesnakes are said to have a lifespan of at least 20 years while in the wild it is much shorter one.

The carnivorous diet of a rattlesnake comprises of rodents, lizards, squirrels, rabbits, small birds, mice and rats. The first bite is swift in transmitting potent venom and immobilizing the prey which is then simply swallowed by the reptile. But the rattlesnake also has its own set of predators and hunted by the eagles, hawks and humans. It is a usual prey for another snake species called the Kingsnake  known to be unaffected by venom of pit vipers and rattlesnakes. However, rattlesnakes are most vulnerable at birth as it becomes easy prey for other species such as roadrunners and skunks.

In North America, rattlesnakes are responsible for maximum percent of snakebite injuries but hardly ever bite unless its feels threatened or sense of provocation. If quick medical attention is sought the bite are seldom lethal. However, as poaching and extermination campaigns propelled by panic take grip and habitat spaces shrink with human encroachment, rattlesnakes find their existence at risk.  Species such as canebrake rattlesnake and timber rattler are already on many endangered or threatened lists.

The beauty and enigma of the rattlesnake has spurred many legends. In Aztec and Mayan culture it symbolized divinity adorning the paintings on temple walls and burial mounds. The revered Mesoamerican deity “The Feathered Serpent” is often depicted as a feathered rattlesnake.  However, in Native American legends the rattlesnake is seen as fearsome and powerful seeking revenge on being wronged or meting out heavenly punishment against wrongdoers. In Southeastern United States, Pentecostal churches are known to use rattlesnakes in a religious ritual known as “snake handling.” Following the words from Biblical verses of the Book of Luke and Mark, believers pick up the venomous snakes without any form of protection. Although there have been deaths due to fatal snakebites the practice continues as the faithful remain unshaken. In some places the rattlesnake is simply a delicacy to be relished.

Demonized by some and revered by others, the rattlesnake continues to fascinate us. However, in a precarious world its existence remains threatened by shrinking habitat and environmental imbalances.