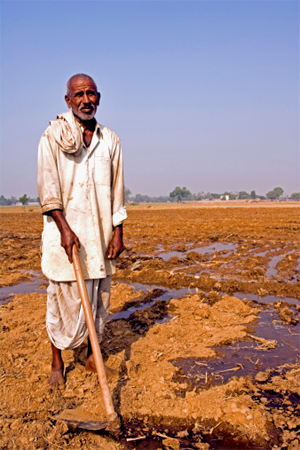 Since the mid 90s, Indian and foreign companies, governments, trusts, and others have been rapidly building businesses—colleges, factories, flats, offices, plants—on land purchased primarily from poor farmers.  Consequently, the farmland in India is vanishing at an alarming rate.

A case in point is the allocation of 186 hectares (460 acres) of land by the Gujarat government purchased or leased, at an undeclared price, by the Ford Motor Company of America who will build a new automobile manufacturing factory in 2012.  While it is heartening that people will find work at the Ford factory and in ancillary industries, it is disheartening in that farmers have lost their livelihoods and the plow land has been reduced.

An analysis of the following data, provided by the Directorate of Economics and Statistics, the Ministry of Agricultural, India, indicates two disturbing trends. Both the net area sown (Table 1) and the availability of grains (Table 2) have been diminishing.


Table 1
Net Area Sown (Data from 14.1: Agricultural Land by Use in India)


Table 2
Food Grains (Data from 10.1: Per Capita Net availability in Gram per Day in India)

The food grains in Table 2 are the sum of rice, wheat, other cereals, and pulses, and the average of Row 2, grains available per day to an Indian for cooking, comes out to be 446 grams (less than 1 pound).

How much rice and dal (from pulse) and how many roti (from wheat) can one cook out of 446 grams?  This is not enough for one meal a day, let alone three meals.
Also, when an average of index-row in Table 2 is calculated and converted it into an equivalent of base year 2000, it results in 445.53 grams per day.  This ten-year data suggests that daily food grain availability has decreased (from 454.40 to 445.53) by 0.887 grams per day each year.  When extrapolated for 1 billion people each day 887 metric tons or each year 323,755 metric tons of less food grain is available for cooking and eating!

The above results lead one to think that declining grain availability per day on a declining stock of farm lands could be one reason why we do not have enough food and why millions of Indians go hungry or remain malnourished.  It could also be the reason why food prices have been rising for years.

The God who gave us life gave us land, water, and air; but policy makers in India are damaging both life and the three things that sustain it.

Does it not make a sounder policy to grow grains on a land and feed starving people seen everywhere in India than to build automobiles on it? Currently there are at least 18 car manufacturers and assemblers in India.

Does it not make a sounder policy to provide clean water to grow food and quench thirst than to promote those industries that heavily pollute it?

Does it not make a sounder policy to curtail the use of processes that foul the air rather than promote the industries that cause the pollution?

Does it not make a sounder policy to build small campuses rather than converting huge farms into sprawling college campuses? Although this has been done on such American campuses as Harvard, Princeton, and Stanford, the U.S. can afford to build mega structures because she has nearly three times the landmass of India and has little more than one-fourth of India’s population.

Could India become an industrial giant and still not have enough food, water, and clean air to nourish more than one billion people?