The way communication is developing and spreading, and the way we are trying to reach for the other planet, I won’t be surprised if someday we are asked to give the name of the planet in the address! Our planet was born more than four billion years ago and has a glorious history. It was born as a ball of fire that cooled down so much that the entire planet was under the shroud of ice. Rocks of Bastar in India and elsewhere in the world too are witness to the cold earth. These 770 million years old rocks have definite striations on their surface indicative of movement of ice on their surface.

I need not say that life hardly prospers in freezing conditions. The freezer of our refrigerator is a proof of this - more perishable eatables are kept there safely to keep the bacteria away. 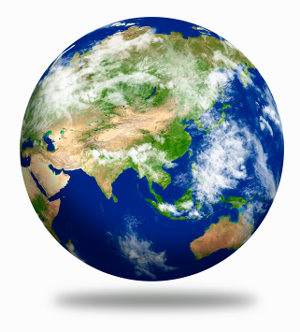 Our planet though apparently looks quite solid and robust is governed by the laws of physics and gets heated if the air around is hot or gets cold and frozen accordingly. It continually warms and cools in a cyclic manner. This cycle is undeniable, ancient, often abrupt and global. It has a lot to do with the radiance of the Sun. We blame the carbon dioxide - of course it has some contribution to the climate, but it is the Sun who controls everything and till date no gadget has been discovered to control the solar activities.

The heating and cooling cycles of the Earth have altered every 1500 years almost on a regular pattern in the past million years of the earth’s history. This cycle is unstoppable - it is like an automobile going down on a steep slope without brakes and of course without a driver.

The earth and its eco-system are governed by the laws of nature. This natural system was already in place when we were born - rather when the human race came in to existence. It is because of this eco-system the natural waste is taken care of. Once it is disturbed the results in a given area can be disastrous. With the advances in technology we are gradually drifting away from the nature and instead of developing in harmony with nature, we develop by exploiting the natural resources without caring for the fall outs. For a considerable length of the earth’s history, the human race did follow the dictate of nature and survived the onslaught. It was more after the Industrial revolution of 1851 that the human race began looking for comforts and luxuries that are many times against the nature.

First we systematically hacked our forests and then began blaming the carbon dioxide and other greenhouse gases for the rise in temperature. We switched from walking to bicycles to cars and bikes and buses and began blaming the air pollution. But that is part of human nature - we always blame something else for our own mistakes.

Look at the old buildings of historic towns in tropics, say for example Lucknow or Delhi. All those buildings are cool in summers without any airconditioner or a fan. Yes the illiterate but experienced architects of those days knew that heat is the worst enemy of people in these areas. And the riches who took their help were always satisfied as the buildings they made were always weather proof. Those who could not afford buildings with thick walls, roof with layers of jiggery, pulses and earthen pots turned upside down to create an ‘air gap’, they went for thatched houses. These were cheap, fragile but tolerably cool in summers. Fancy took a turn and we began chasing the foreign architects. They were trained to design houses for extreme cold climates. They also considered the budget of the client and aesthetics. Thus they created houses with 4 inch thickwalls, which are hot as oven in summers and cold as a freezer in the winters.

In order to keep the dwellings cool airconditioners were installed. These gadgets have certainly increased the instances of bronchial allergies and asthma in India, apart from adding GHGs to the atmosphere.

Most of the complications of life on this planet are our own doing. I prefer to call them self-inflicted miseries. And we blame the emissions and life style and the like.

Yes I agree that we have to curb emissions else we will run short of the air to breathe. But I hope everyone will agree that we should plant more trees. The so called forest cover is now merely a thin shroud of vegetation at most of the places in India. Rapid rise in population creates pressure on land. We need more land, more water and naturally more clean air. For this most of the time poor trees have to be sacrificed.

The nature gave us the elixir of life, water on this planet. We are here only because of water and air. Both of these are again connected with trees. A tree is not merely a piece of wood. It is an eco-system into itself. You have just to take a hand-lens and observe the ground at the base of the trunk. Still better if you can dig slightly underneath and see for yourself. You will find rotten leaves, myriads of insects and if you can further enlarge the picture you will see millions and millions of bacteria. All these living being are not there just like that. They help in creating humus - a boon for the mankind. The humus mixed with soil makes it very fertile. It takes the nature a thousand years to develop the soil. It is one of the most precious commodities of the nature, produced by the nature.

As we developed and began construction activities we needed lots of soil to fill up the depressions and low lying areas to make them level for our dwellings. It was easy for us to remove soil from some other part of the area and level the ground we needed to ourselves. In this process not only the individuals but the governments too indulged in massive removal of soil. In Lucknow, the capital of U.P., a promising and upcoming town during the past five years infinite tons of soil were removed from green fields - they were either pilfered or forcibly removed to fill the depressions on the right bank of Gomti River. On these today stand the exquisite stone and bronze statues and sandstone covered parks. No doubt these parks will be there to record the history of times to come - but alas the fields from where soil was lifted to create these parks will remain barren for thousand years to come!

This sort of lop-sided development, I personally prefer to call it construction activity is nothing but rape of the mother earth.

This was just give the readers an insight in to what we are doing with our planet, which the nature took billions of years to create.

Yet another example is worth knowing. We all know we need water for our survival. There are two main sources of water available to us - the surface water in the form of rivers, ponds and lakes etc. and the groundwater. Till not so ancient times the rivers were considered sacred. Hypothetically and for sake of records they are still considered sacred. But we have built drains carrying our night soil and all waste direct in to our so called sacred rivers. Consequently, the river waters have become hazardous for consumption. The rivers are not merely conduit of water. They are an ecosystem and have a deep influence on our environment. Rivers are not only the source of water but a source of food also for millions of fish eaters. But we have hardly left any stretch of river unpolluted. The aquatic fauna perishes, gasping for air.

It has been a human weakness to settle on the banks of rivers. Our ancestors of Indus Valley too had this weakness and built beautiful towns along the river. It was either excess water (floods) or shortage (droughts) that led to mass migration or en-masse deaths. Within no time a flourishing civilization vanished. Thereafter the next civilization that thrived in the country is the Ganga valley civilization. Due to plenty of water for agriculture the Ganga-Yamuna interfluve became a prosperous area. Soon people began migrating to this area and today it is most densely populated area of the country with a population distribution of more than 800 persons per square kilometer. Naturally water in this region is under great stress.

The rivers of this region, for example Ganga or Gomti and many others are aquifer fed. In layman’s terms like the mass of water flowing on the surface there is a similar quantity flowing in the subsurface. Actually all these rivers are intimately connected with the aquifers and either draw water from there or give water to the aquifer. This relationship has kept the rivers and the aquifers alive since centuries.

The advent of the civilization has become a cause of stress on the water. For example, the surface water has been heavily polluted by us. The groundwater has been pumped out without caring for the consequences. Groundwater is like a bank account. One goes on depositing money in the account and also withdraws according to the balance of money in the account. Unfortunately the parties in the groundwater account are millions, with full freedom to withdraw at will. Recharge of this groundwater account is only via rains. Of late the rain God has been rather sore and the pattern of rainfall has become erratic. While we had 40 to 50 days of rainfall during the 90 days of monsoon, now we have 30-40 days of rain in sudden spurts. The drizzle of earlier years used to seep to the subsurface and recharge the groundwater levels. Now the rain in fits and starts does not find time to trickle down. Moreover water in bulk quantity swiftly carves its own passage and flows down to the river and gets lost. This is at places wherewater flows through kutcha surfaces. The urban areas have been largely concretized and the rain water is just drained out and lost.

There is a strong need for conservation of water. In high rise apartments kitchen waste water recycling plants should be installed. It is seen at every place that washing an automobile or watering the garden or simply wetting the courtyards is a common practice. Precious drinking water is thus wasted. Recycled water should be used to conserve the quality of water.

More on the urban planet in the times to come.