Each time I visit Fatehpur Sikri and the Taj Mahal, it is a new experience.  On my ninth visit to the Taj, I travelled to Agra by road as do many tourists from Delhi. As on any road journey from one city to another in India, one comes across villages and dusty small towns. They are part of the landscape when you travel between Delhi and Agra. For a less exciting journey I would have travelled in an air-conditioned coach of a train. Having a  car at your disposal allows you more mobility in places like Fatehpur Sikri, situated 40 km from Agra. My driver navigated Sikri’s narrow roads, sharing space with meandering goats and buffaloes. Local women wearing burqas watched us and smiled. 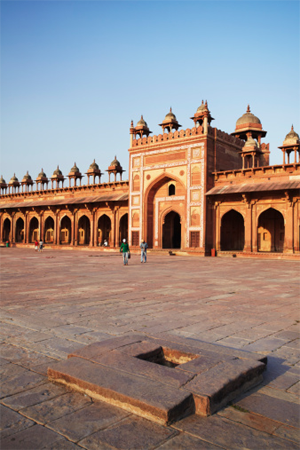 I entered Fatehpur Sikri, Emperor Akbar’s magnificent capital between 1571 and 1585, from Badshahi Darwaza (Emperor’s Gate). Today it is the entrance to the dargah (shrine) complex, closest to the tourist parking lot. I was told that Badshahi Darwaza was used by Akbar to join the congregational prayers in the Jama Masjid. As I entered the great expanse of the mosque’s courtyard, I was overwhelmed by the grandeur and dignity of the place. I removed my shoes at the gate as is customary before entering an Islamic place of worship.
Foreign tourists could be seen purchasing hats to protect themselves against the sun. A five-rupee (about 10 US cents) bus ride took me to the gate of Sikri. Our tour guide seemed knowledgeable about the Mughal dynasty, and how Akbar built this whole new city to be his capital. To cut the long story short, Akbar set up the new city after the Sufi saint Shaikh Salim Chishti’s prediction about the birth of an heir to the Mughal Emprice came true.
The red sandstone capital of Emperor Akbar, one of his architectural achievements, was spread along a ridge. The great mosque and palace buildings, deserted after only 14 years, are a vivid reminder of his power and vision. Perfectly preserved, they conjure up the lifestyle of the Mughals at the height of their glory.
It is great to imagine legendary musician Tansen, one the nine jewels of Akbar’s court, singing and Anarkali and Salim - the maid and the prince - looking at each other. The guide showed us the tunnel through which we were told that Anarkali was sent to Lahore after her relationship with the prince enraged the emperor. The guide convinced me that Anarkali did not meet the cruel fate that popular stories about her tell us. 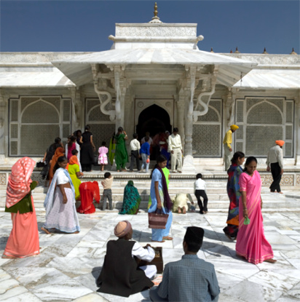 The tomb of Shaikh Salim Chishti, a masterpiece in brilliant white marble, dominates the northern half of the courtyard. The jali is highly decorative while the carved pillar bases and lattice screens are stunning pieces of craftsmanship. The shrine inside, on the spot of the saint's hermitage, originally had a red sandstone dome, which was marble-veneered around 1806. Both Hindu and Muslim women pray at the shrine, tying cotton threads. Indeed I came all the way to untie the threads at the shrine and tie new threads to fulfill my secret wishes! The priest caught hold of me: “Have you untied the sacred thread?” I said, “Yes”. “Then come here and place the thread here and pay some money”. I readily did that. 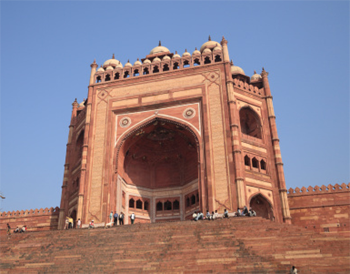 Buland Darwaza or Triumphal Gate dominates the south wall but it is a bit out of place. Built to celebrate Akbar's brilliant conquest of Gujarat (circa 1576), it sets the style for later gateways. The high gate is approached from the outside by a flight of steps which add to its grandeur.
From Fatehpur Sikri, I travelled to Agra, arriving there in the hot afternoon. I took a camel cart ride from the West Gate (crematorium side) to reach the Taj. There were horse carriages and cycle rickshaws for tourists near the Taj, presenting a wonderful medieval  atmosphere in the 21st century. Tourists poured from all over the globe and with the temperature soaring, ice-cream vendors did brisk business and chilled mineral water bottles were in great demand. A Japanese tourist nearly fainted. “I want water, only water.” 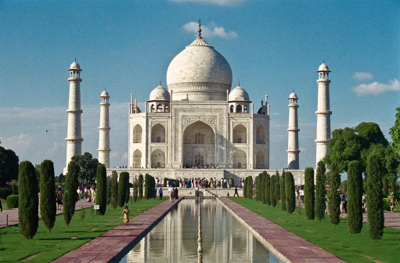 If possible, one should avoid visiting the Taj on Sundays as it gets unusually crowded on public holidays. The tour guide suggested we use the East Gate as the ticket counter at the West Gate was hardly visible through the throngs of visitors. Passing through narrow alleyways, we managed to enter the main gateway. Both the East and the West Gates are similar in construction.
I relaxed as I gazed at the magnificent Taj under the hot April sun. To quote, T.S. Eliot, April is after all the cruelest of all months. The jali work in shining marble is captivating. Muslims were known for the geometrical designs and the Hindus imitated nature. The Taj also depicts marvelous leaves and flower patterns imitating the nature. On my last trip a few years ago, as I watched the scenery behind the Taj, I could see women washing clothes in shallow dirty waters of the once clean Yamuna. Now there is a carpet of grass touching the outer structure. Pollution in the Yamuna river has reached dangerous levels and we Taj lovers should be concerned as the river forms an inseparable backdrop to the the monument of love.