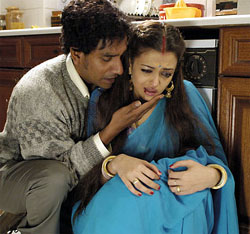 To see or not to see, that was the dilemma. I am not sure what came over my rational mind, for a Monday afternoon saw me playing truant and in the theatre to watch Aishwarya Rai in Provoked. A few minutes into the movie and one knew one had made a huge mistake. Inspired by the real life and traumatic story of Kiranjit Ahluwalia and based on her semi-autobiographical Circle of Light, the movie is said to trace the anguish and agony of a domestic abuse victim, who after 10 years sets her husband on fire. The tag line of the movie is supposed to say it all: In prison she found freedom. But the 2-hours in the theatre are anything but freedom for viewers.

The opening shot of the movie is intended to create a dramatic appeal - the scene is shot in shadows. Held by an unknown figure, a candle spreads its dim light across the darkness of the living room, finally settling down on another unknown figure asleep on the bed. Within seconds the entire room is on fire, and the figure on bed goes up in flames. The camera moves out to focus on the nervously-shaking Kiranjit (Aishwarya Rai), and then the figure in flames - her abusive husband, Deepak. The scene's appeal is enhanced by A R Rahman's soulful background score. And this is what probably makes this the best scene of the entire film.

Kiranjit, as everyone knows, is charged with murder of her husband and sent to prison. In a series of recurring flashbacks the audience is made familiar with the events that led to a small-town, Punjabi girl taking to such a drastic step. Domestic violence, sexual abuse and many more make Deepak the man you would want to strangle, and makes you empathise with Kiranjit. Conceptually yes, the theme works, but as a movie, it doesn't.

First, the actors - Aishwarya, needless to say, is a complete miscast. Though her sincerity is touching, you come out believing she is much better doing a Kajra re. Her deadpan expression fails to capture the trauma and torture borne by the character. While attempts were made to de-glamourise her, the stamp of a model is never really lost. Or maybe it is us, the audience, who view the Miss World first and only then look at her as an actress. Her attempts to speak Punjabi are actually comical (were there no language experts on the team?), and there are times when her body language just doesn't seem to be in sync with the suffering of the character. It is probably the director - for one felt she did a rather good job in Mani Ratnam's Guru.

Naveen Andrews as the abusive husband was sufficient but not great. The real Kiranjit had mentioned that her husband suffered from a split personality. While this has not really been touched upon in the movie itself, there are moments when Deepak veers from being a loving, sensitive husband to insulting, scornful man beating up his wife. Naveen does a much better job than Aishwarya of capturing these emotions. The let down of the movie, however, was Nandita Das. Or probably it is our expectations of Nandita Das. She plays one of the Southall Black Sisters who take up Kiranjit's case. Nandita, however, was loud and irritable, and hardly convincing as someone who had loads of empathy for the domestic victim.

What should have been emphasised upon was lost in too many clich's in the film - Kiranjit's transformation from a scared and scarred wife to a confident woman is not convincing. Aishwarya being Aishwarya - it seems to come rather too easily. I know a lot of 3 years of prison experience cannot be captured in a two hour movie - but to me that was an important aspect of Kiranjit's life and that is where the message is - in transforming oneself from a victim to someone who speaks for herself. This is lost in the series of legal battles that are shown as is the message from the real Kiranjit: "Never do what I did in life. But at the same time never suffer in a bad marriage. If you are unhappy in a marriage, get out of it."

Provoked didn't work for me, but I understand it was a movie that should have been made. If only Jag Mundhra had truly done another Bawandar.