The Power of the Poop

Our country is facing many dilemmas. There is power shortage on one hand, majority of the towns and villages do not get 24X7 electricity. On the other hand a major power generating facility, animal poop goes a waste. Barring the metros, in all the towns including the state capitals and villages one can see hordes of milk cattle ‘grazing’ on the solid waste dumps on the roads/approaches to towns and villages. Each morning and evening these cattle return to their homes to be milked and again abandoned by their ‘loving’ owners. Yet another irony is that we consider and worship the cow as mother and allow her to roam free and guzzle the waste!

[For understanding the tragedy of the cattle guzzling [grazing] on the waste dumps read "Are we being slow poisened?" by Ramesh Menon]

We are ignorant that these animals are a potential source of energy. This is not a new find. As early as 1930, India had its first biogas plant. At that time due to lack of technological advances the designs were not optimally developed, hence not very cost effective. Mahatma Gandhi had dreamt of a self-sustaining India forging ahead on the path of development by optimally using its own natural resources. 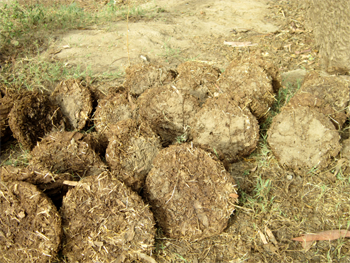 Energy sources, as we know are of two types. We have an exhaustible type of source like the hydrocarbon (coal and petroleum) and the nuclear energy and the inexhaustible types, like the hydroelectricity, solar, wind, and biomass, ocean waves, geothermal energy etc. In India, since times immemorial we have been using the biomass as a fuel. It was probably used first time by our ancestors of Old Stone Age period when they found that they could light a fire by rubbing two stones. They must have started a fire by burning dried grass, twigs etc. with the spark thus generated! Thus began the use of the biomass as a fuel. In short, such material is in use as a fuel since time immemorial, but of late the term biomass has given it a more ‘respectable’ feel.

We know that there is no smoke without fire, as such when biomass is used the old way by burning, lot of smoke is produced. It is this smoke which is becoming a headache for the society. The new technology makes it possible to burn it by producing minimum or no smoke and obtain maximum heat.

‘Biogas typically refers to a gas produced by the biological breakdown of organic matter in the absence of oxygen. Organic waste such as dead plant and animal material, animal feces, and kitchen waste can be converted in to a gaseous fuel called, biogas,’ says the Wikipedia.

Anil Dhussa of the Ministry of New and Renewable Energy, Government of India says that about 80% of rural energy is derived from non-commercial sources like 320 metric tons of fuel-wood, animal dung, agro wastes etc. He further says that about 80 million houses in rural India still use kerosene for lighting. About 80 million homes with about 400 million people are still without electricity and even Indian cities face the electricity crunch daily. Even if enough electricity will be generated, it will be a herculean task to electrify each and every village because of the remoteness of many a hamlets and linking them with grid may be almost next to impossible.

But as already said there are enough cattle in India and slight efforts can give them cooking gas and even electricity at least for five hours daily. The biogas has the gases like methane, hydrogen and Carbon Monoxide. It can be easily combusted with oxygen to generate fuel for cooking or convert energy in the gas to electricity and heat.

The day our ancestor rubbed two stones and generated a spark to light dried grass, he learnt the significance of energy. Since then man has never looked back in finding out ways and means of generating energy for various purpose. During the past 50 years there has been a great thrust on the use of hydrocarbons as a source of energy. But it is now known that on combustion they become one of the main ingredients of Green House Gases. Therefore, World over efforts are being made to switch over to greener technologies. That is technologies which produce minimum or no greenhouse gases.

Use of biogas is coming up as one of the better alternatives as a fuel for cooking and lighting. The thermal efficiency of biogas is 60%, just 6% short of Diesel, but it is not as harmful as diesel. Although as of today, it is impossible to deploy a technology that would completely replace fossil fuel. But at least a large chunk of population can bank upon biogas in the rural areas.

Biogas is a renewable resource. In any case the animal dung is partially converted to dung cakes and remaining to manure. Both these products are much less efficient compared to biogas. It is estimated that there are approximately 238 million (plus) cattle in India which produce plus 1000 million tons of dung every year. This much dung can produce electricity equivalent to that produced by 5432 million liters of kerosene. Not only animal dung, one can also add night soil and even poultry droppings in the biogas plant. After the gas has been extracted, the slurry left is so rich in nitrogen that it can give 3.5 million tons of nitrogen to the soil every year.

A biogas plant has a design either floating dome type or a fixed dome type. But the components like Digester, Slurry Mixer, Gas Holder, and an outlet tank and slurry pit are common for both. Depending upon the number of cattle one can have a small, medium or a large sized plant. In India, Khadi Village and Industries Commission is one of the agencies that can provide the designs and expertise to the interested parties. Apart from them several agencies and NGOs are now-a-days helping the villagers in installing a biogas plant.

Indeed, even poop is valuable, don’t discard it.