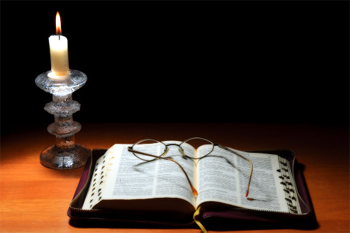 The concept of an origin of the world, from which, as in the biblical account of creation, all things derive their existence is disarmingly reckoned as ‘In the beginning’ Genesis 1:1; which goes on to describe the creation of the complete world in succeeding stages called days, six days in all; and on the seventh day God rested.  In Genesis 2, the conditions of Adam in the garden of Eden are described, including the creation of woman as a help-mate for man.  On to Genesis 3, where the narrative leads to the temptation and fall of Adam - the conversations between the serpent and Eve, between Eve and Adam, and God and Adam - gradually assumes the kind of real time context that we would recognise, right up to the final verse where Adam is ‘cast out’ from Paradise.
In summary of Genesis 1 to 3, we notice a seamless continuity of events with the time of the creation of the world in seven days.  From Genesis 4 on, the narrative of events is consistent with our understanding of reality, notwithstanding the discrepancy of a populated earth that, for example, would threaten Cain’s life after he murdered Abel, despite the two being the first children of Adam; and the attributing to Adam and the early descendants of Adam an impossibly long span of life – for Adam, nine hundred and thirty years Gen 5: 5. Thus while the narrative in the succeeding chapters continues in everyday fashion, the odd insistence of lives of hundreds of years jars our credulity.
In the Bible’s Old Testament, we see the remarkable blend of what is normal and abnormal, the assumption that all is normal, is factual, as given credence, for example, in detailed genealogies that trace ancestry back to Adam, ‘who was of God’.   As we progress through the Old Testament, things do improve in the realism of recorded events, we can at least acknowledge are feasible.

In the New Testament, in marked contrast, we can find no apparent anomaly, except, of course those events concerning the birth, life and death, and resurrection from the dead of Jesus Christ, and the post-resurrection appearances to his disciples.  One finds an echo here of surreality of event found throughout the Old Testament, in respect of divine intervention in history, the creation of Adam, the serpent in the garden of Eden, the circumstances of Moses leading the Israelites out of bondage in Egypt, Joshua and the walls of Jericho, and Samson’s strength in buckling stone pillars; however, the relatively modern times of the New Testament, historical allusion, make the record of the life of Jesus Christ appear less of a myth, certainly credible to many in the centuries that followed, to modern times.
Our modern view of the world is informed by centuries of science that has gradually revealed the facts as we know them, such as make even the witnessed supernatural events of the New Testament invalid on principle.  The origin of the universe is derived from scientific investigation as space-time expansion from a singularity, that itself emerged as a quantum event from nothingness; and the subsequent origin of life is seen as the outcome of random events at molecular level.  The evolution of the species can be backed up by evidence, though it leaves many questions unanswered, none that cannot in principle be answered.  The point being that the answers to all questions of existence are there waiting to be discovered from the availing evidence in a scientific manner; not from conjecture such as, for example, revelation in the bible amounts to being, where the concept of God, and what God does, is one revealed, and on this basis, to be accepted without question; as later, the teaching and claims of Jesus Christ to be ‘the way, the truth, and the life’ are to be accepted on faith.   Furthermore, science counters any accusation of its own claims to absolute knowledge, a sort of ‘bible syndrome’ in its own right, by stating, in the dictum of Karl Popper, that any scientific theory by definition is falsifiable. Thus science appears to be weaker in its claims for certainty than the bible; but claims it is stronger for being realistic, as the bible in its absolute claims is not, and incorrigibly so, given the myth of creation, for example, still held by a following as the literal truth; never mind the claims of Jesus Christ, who himself predicted the end of the world in the lifetime of his followers.
It is when we enter the realm of identity, however, that science, seemingly the paragon of realism, actually fails against the bible. From the beginning, the bible sets out to identify – God, the heavens and the earth, darkness and light, water, land, animals and man – these identities are referentially retained as fixed concepts: proving them to be of the nature of concept, and thus as identities the product of a Divine mind. There is no inherent contradiction in this method: everything is retained as actuality, even though past; either in partiality in the human time based comprehension of events, of present and past and, in potentiality, the future; or in that presumed comprehension of God where it is most reasonably held in toto.

Science, like the bible, identifies all forms of existence - we must put the brakes on hard here! - for science assumes the identity basis of things, a conceptual reality, just as the bible does; but Science has a duty - as the bible doesn’t, since it already identifies a prime mover, God - to explain its terms. What is identity?  How is it that identity, which is absolute, and which everything is sustained in to be identified, is brought about in time, where everything is always in flux?

Science escapes this impasse in two ways: that everything it identifies is composed of other identified things: it can thus pretend to higher objectivity than say a theory of spontaneous generation of flies from rotting meat; and that when it comes to the crunch, to the disavowal of all but natural forces in nature, where nothing else – wait for it - can be identified.  In mathematics, its tool, fixed concepts of number and equation govern what is by nature assumed as fixed.  The irony is science does not acknowledge the conceptual basis of identity of a given thing, but is distracted into analysing it into its constituents in like absolute terms of identity: a proton is made up of quarks etc. but each time it defines an object it is in absolute terms of identity, which doesn’t exist in the very world of science, for if it did then science would believe in God.
When science grasps the nettle of concept, it discerns everything is affectively formed in a context where it acts as an affective identity – is in a real sense a manifestation of context, identity from identity: thus the forces of nature are of affective context.  Context is the pre-potent identity – that is the foundation of the concept of existence itself.  Anything that is said to exist does so contextually, in which it is identified, and is thus in identity conceptual, whereby it can be retained conceptually, and which provides the conceptual actuality which is the whole of existence.  In thus acknowledging the identity basis in context of any existing thing, science can acknowledge a contextual source of all identity that is itself invisible to the normal tools of science.  It is then in line with faith in the Divine origin of the creation.
Reverting back to the opening paragraph, the Old Testament bible deals with the creation as with fixed concepts, and is thus true as it goes, seeing that ‘the heavens and the earth’ are concepts denied to science unless it too accepts the absolute basis of identity, whose mutual affecting science observes in all things, again, identified in absolute terms, retained as concepts.  In identity, science is robbed of the very reality it makes claim to, and denies to God, by God, because it is only in terms of identity, an absolute entity, it can begin to define its idea of reality: and that is the way God creates.