Strange is our planet - so far the only place where life exists. What originated as a single living cell, the life on this planet evolved through the passage of time, and reached its peak in the form of the so called supreme ruler, the Homo sapiens - or in the layman’s term, the human beings. The process of evolution has been tough for the life and also for the eco-system. During the past 25,000 years, when grasslands turned to deserts, the ancestors of Camels developed long necks to forage on the leaves which were getting scarce and growing towards the apex of the plants. Such animals also developed mechanism in their bodies to conserve water and padded feet to walk on the soft, hot sands. Such adaptations saved them from extinction. 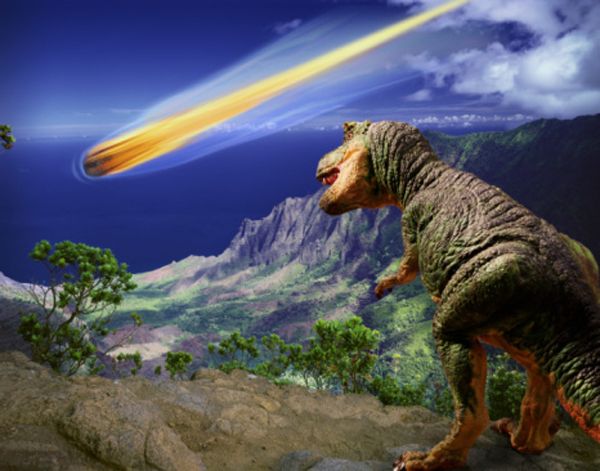 On the other hand during their course of journey the various life forms evolved and many of them became extinct. The latest extinction took place some 65 million years ago, when the dinosaurs became extinct. Collision of a giant asteroid with our earth is considered to be the main reason behind annihilation and extinction of the Dinosaurs on the earth.

The collision of the asteroid produced a vast plume. To understand this, just throw a brick on a mound of clay. The fine particles of clay will rise in the air and then slowly settle down. During that period, you will notice a cloud of dust over the mound. Likewise, so powerful was the collision that the cloud of dust raised covered the sky around the globe to the extent that a devastating climate change was triggered. This caused extinction of not only dinosaurs but also 47% of marine genera and 18% of land vertebrate families.

The past 600 million years of the history of the earth has seen five major extinctions. Thus as against the common myth that the dinosaurs were the only animals that were wiped out, we must accept that the nature is much more powerful than we think.

Life in our planet evolved initially in the sea. About 440 million years ago due to sea level changes, 60% of marine genera became extinct. This is supposed to be the first large scale extinction on the earth. After about another 100 million years, that is about 360 million years ago during the Devonian period of the earth’s history 57% of marine organisms were wiped out for the reasons best known to the nature.

Around 250 million years ago, towards the end of the Permian period, our planet was not as quiet and serene as it appears today. There was lot of rumble in its womb and volcanoes aided by asteroid impacts caused one of the worst mass extinctions. Nearly 95% of the life on the earth was wiped out. Just imagine the wrath of the nature. I wonder if the Mother Nature whom we praise often in our poetry and also in our philosophy can be so ruthless!  But it is a fact that the nature can be really cruel!  It is evident from the fact that the nature never stops - again between 199 million and 214 million years ago Atlantic Ocean started spewing massive floods of lavas. The heat released was so much that a massive global warming was generated; leading to extinction of around 22% of marine families and 52% of marine genera were eradicated.

And then 65 million years ago, came the last blow which caused the extinction of several live forms including the Dinosaurs.

With this background we come to the main issue of the possibility of yet extinction in the present times. Is it possible? Well the answer is that in the Nature, nothing is impossible. Distinguished palaeontologist, Richard Leakeyand his journalist friend Roger Lewin said in 1996, "Homo sapiens is poised to become the greatest catastrophic agent since a giant asteroid collided with the Earth 65 million years ago, wiping out half the world's species in a geological instant."

The specter of the sixth extinction is looming large, feel many of the scientists by seeing the reducing numbers of Tigers and many other species, which are fast dwindling. Majority of them are facing the wrath of the human beings. For our food, comfort or may be just for the heck of it we have sacrificed a large variety of fauna and flora and we continue to do so, without bothering about the outcome.

But what deserves our attention more is the fear of the extinction of the mankind itself! Darwin thought that under normal circumstances complete extinction of a species is much slower process than its evolution. But after having thread bared the Chixclub crater the contemporary scientists believe that extinctions could be sudden. But such collisions, if any, are unavoidable.

What is still more risky than an asteroid collision is our own doing. We have proliferated like insects. For the past three decades the climatologists and geologists have been issuing warnings after warnings about the perils of climate change. But we have never bothered about them. The atmospheric greenhouse gas content is on the rise, water, especially in developing countries has been polluted beyond remedial measures and for the requirement of dwelling we have not left an inch of land, including the flood pathways of the rivers.

Since our numbers have increased and we are more developed than any other creature, we are trying our best to improve the productivity of our fields. The outcome is a fertilizer enriched soil through which all the toxic material percolates down to reach the reservoirs of groundwater. Our urban complexes are methane time bombs – so dangerous are they that we do not need an asteroid to annihilate us - our own poop is enough to do that!

In the past, the nature controlled the number of species that could reside in our planet. Had the past five extinctions not taken place, we would have not evolved or if at all we had evolved there would have been a constant war with the dinosaurs!  Now we have tried to conquer the nature. At least we think so. But we forget that even the mighty Dinosaurs must have been feeling like that when they roamed our earth. In their case it was a major collision and everything was over. In our case it will be a painful death - due to starvation, thirst, natural hazards, asphyxiation, diseases etc.

It is time to ponder upon these points at least for the sake of the future generation.