Around six years ago a student from IIT Kanpur came to our research Institute for 2-3 months’ internship. We are situated in rural Maharashtra and in those days did not have either a good internet or cell phone connectivity. Couple of days into his internship he found out one day that there was no signal in his phone.  He simply went berserk and would come to my room every 10 minutes asking whether I can call the local phone people to restore the signal. Observing his obsessive behavior I was at a loss on how to react and soon realized that he suffered from tremendous insecurity and thus felt that by not being able to talk to his friends he was missing out on something. His behavior was almost like that of a fish out of water!

This behavior is not unique and is now commonly seen in most youngsters. All over the world the desire to chat, text and take photographs is so intense that almost every waking minute a person is glued to his/her cell phone or internet. This itch to use the cell phone all the time has become a nuisance and a hazard not only in India but all over the world.

Why have we become such compulsive users of cell phones?

A part of this phenomenon could be explained by the fact that brain reacts to two most important inputs – sight and sound. Both these inputs take primacy in the brain over other sensory signals. Thus the ringing of the phone and the flashing message are very difficult to ignore.  Also the loud tone very close to the ears either through head phones or cell phone has a mesmerizing effect on the brain. 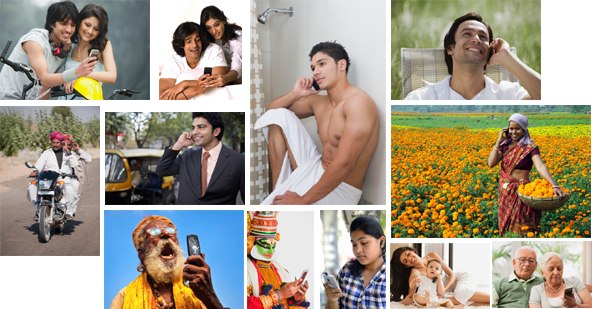 However, I think a major reason for this malady is the insecurity which leads to the fear of a person on “missing out”.  This insecurity is a part of an ever expanding spiral – with the inability to analyze and evaluate the information, a person simply keeps on reacting ever more to input signals.

The information over-load from cell phones, internet and TV is making us capable of only reacting to events rather than sit calmly and analyze them. This is almost like an animal behavior where they only react to inputs.  The difference between humans and animals is the ability of humans to use their big brain to effectively process and digest the information. I somehow feel that we (specially the youngsters) are losing this ability.

This has serious repercussions on the future wellbeing of society since we are raising generations of young people who only know how to react. This is already seen in the explosion of social media like Facebook, twitter etc. where without their ability to analyze and think deeply youngsters react to any rumors or gossip in an immature way.

Cell phones and internet are very useful devices and have made a difference for better in the world. However they are tools of communication and information and we should not become their slaves. Their use can be moderated through discipline so that we allow our minds to absorb and digest the information rather than be overloaded and overwhelmed by it.

For starters, we can be off internet and cell phones for one day in a week. This day can be utilized to just sit and talk or read and do some other activities which allow us to interact actively with our environment.  This is the message I have been giving for last many years in inspirational talks to youngsters all over India.

Mahatma Gandhi understood this power of silence long ago. He used to have maun vrat (vow of silence) once a week so that he could think, reflect and write.  He was on to something that the present generation will do well to emulate.

The reaction response to inputs and information overload is also creating non-social individuals. Last year I gave a talk to IIT Kanpur (my alma mater) students. In my interactions with them I found out that most of the students, though they were living in adjacent rooms or in the same hostel, would spend their time chatting on the phone or interacting with each other via SMS or chat / email message through the internet. They seem to be losing the ability to carry out face to face social interaction with their friends. This creates strange situations and sometimes leads to loneliness. And in some cases especially for introvert students pushes them towards suicide.

A face to face interaction no matter how unpleasant it is does help to let the steam out. Unfortunately the cyberspace technology has not been able to transmit fully yet the human emotions !

Thus for youngsters and others here is the message. Switch off the cell phone, TV and internet for one day in a week; relax, read, talk and do some physical activity and the world will not stop. Sun will still rise from the east at the same time and more than that the “silence of electronic information” will give you mental peace and help you to better cope with your anxieties and insecurity.