and Dictionary Meaning of Single Letters

Continued from "More on Decipherment of Indus-Saraswati Script" 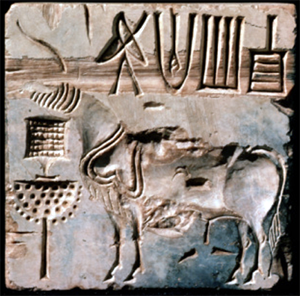 ). In some texts four cornered strokes (

) are there. These signs distinctly separate one or more signs from some texts to others. These signs are identified as determinatives.

To explain the meaning of them the earlier thinkers opined these marks as below:

Following types of determinative signs are found in Indus Script:

Researchers often find it difficult to get the meaning of the use of single signs in some inscriptions. Almost 170 such inscriptions are found. After determining the valuations of some Indus signs in the light of Indo-Aryan Language we can have the dictionary meanings of single Sanskrit letters and from that we can decide the reason of using those single signs. This possibility was first thought by B.B. Chakraborty 30 years ago.

The reasons to use single letters are the following:

To get the meaning of single letters I have followed the understated methods.

The use of a phoneme through a single letter to describe something special is an old Indian practice. The use of ‘aum’ sign or ‘swastika’ sign is one or two of the examples of them. Swastika sign has its root in the Indus-Saraswati civilization. Many of those Indus-Saraswati signs were accepted by the Vedic people and some others were invented by them. Almost all the Vedic /Sanskrit /Devnagari /Indo-Aryan phonemes / letters had specific meaning. From the above mentioned two dictionaries (Monier Williams, 1st published from London in 1899 and Apte in 1965) I have taken the meanings of single letters to establish that those single letters have long past significances.

Single Letters Used by Indus-Saraswati People
and Their Lexical Meaning 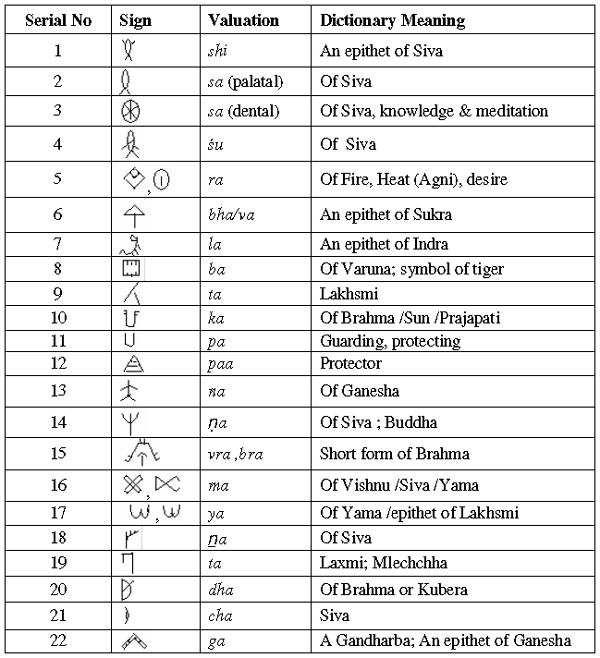 I want to produce some other meanings of letters used by Vedic people, but not found in Indus-Saraswati civilization. Especially vowels were not used by Indus people independently. 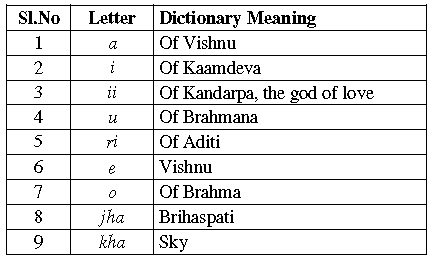 There existed dynasty who were the believers of Vedic cultures (at least Atharva Veda) in one or other forms in the Saraswati River valley. To them the Vedic gods were very much known. We should not forget that those gods were known to the Hittite people of Middle East also.

From the Indus-Saraswati list we found the sign of ‘va’ which is ‘an epithet of ‘Sukra’ and from the rest list we get ‘jha’ which means ‘Brihaspati’. Hindu mythologies say that Sukra was the Guru of Asura-s and Brihaspati was the Guru of Deva/Sura-s. So the use of ‘va’ sign by Indus-Saraswati people and ‘jha’ by Vedic people can be explained properly.

From the names of gods we get the maximum uses of the name Siva, who was regarded as Pasupati or Maheswara. The common pictures of god Pasupati found in that areas are hereby attested.

I have found an interesting lexical meaning of the phoneme ‘ksha’ which means ‘a demon or Rakshas’.

Lord Siva was no doubt regarded highly by Indus-Saraswati people. Mythologically Sukra was the guru of Asura-s. Varuna was one of the head gods at the Rig Vedic period, but later degraded by the Sura/Deva-s. Varuna was worshipped by other Vedic Aryan sects. Like the Persian (Avestan), Indus people had their regards for Varuna. Ganesha, the son of Lord Siva was regarded a lot by them. In present days Ganesha is the prime god at western part of India, where festival like ‘Ganapati Utsab’ is observed. On rare occasion names of gods like Indra and Laxmi are taken. The Devi of cultivation might be somewhere synonymous to Laxmi. All those single letters reflect the composition of the society I want to establish.

These single letters are used with the belief that the said gods would protect them and their belongings.

Single letters (often ligatures like aum = a+u+ma by Vedic people and ksha= ka+sa by Indus-Saraswati people) were in practice as titles or devotional reasons for a long time. In case of Harappan people the use of single letters separately and with other names are found abundantly.

The Indus tablets may have used as tokens, made up in advance and distributed when goods were brought into the city as tribute or sale  – J.M.Kenoyer,1998

Many ancient scripts employ special sets of signs, known as determinative, which are not pronounced when inscriptions are read – B. Wells, 1998.