Identity as the Basis of Existing Things 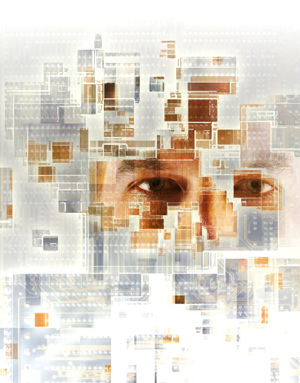 Reality is nothing if it is not composed of things that are identified.  Identity is really the form of eternity in what we think of as the passage of time, therein is the clue to its provenance.  Identity is changeless; or else, nothing can be identified, because identification defines what ‘is’.  We identify change in what is identified, but in stages only of identification.  An apple on a table, for example: if the apple is lifted to the mouth and bitten into, and slowly eaten, it will always be referred to as that particular apple – with a bite taken out of it, or half-consumed, or reduced to its core and discarded - even as the process of change is identified.
The mode of identity applies to everything that comes into existence.  Existence is a contextual state, where the existence form is formed and identified contextually, manifesting the ‘nature’ of the context in which it is formed, which consists of existence forms that affect each other as identity forms.  An existing thing, realised as an identity, contextually has the characteristic of an idea form: which explains its identification.  For example, anything I perceive that is identified is referred to in the present tense: a chair, a book, a computer screen etc.  The present tense implies sufficient duration to be identifiable in the perception of the observer.  In the context of existing things, all things can be analysed down to changing from moment to moment, but that is not the way they are contextually perceived and identified.  If something changes it is identifiably changed and judged different to what it was before: both states retained in the idea of them, where idea is retained identity realisation.
What is an idea? It has its own realm of reality that picks up from the world of existing things.  It is a thing of perception, both in what is perceived through the senses of existing things, where identification is really forming an idea of something, and in what is perceived conceptually, where the whole world of our experience resides, encompassing the past, activating the present, and enabling a realisation of the future.  Although ideas are reckoned by science as the outcome of physical operations involving firing neurons in the brain, they yet appear to our realisation of them as uncomplicated and largely spontaneously generated, whose substance though representative of reality is intangible.  Once realised from perception, however, ideas are unleashed into an internally perceived world not merely of identified objects, but of actions and imaginings of what does not as yet exist that is representative of reality.
Given that existing things assume the form of contextual ideas that are then perceived by living forms and identified, and retained as physically insubstantial idea forms that identify the physical world, we arrive at a strange conformity between the physical world of forms and the identification of them in the insubstantial world of ideas; more strange still that the whole of the past is identified in idea forms that appear as real as when they were existent physically. For example, David Cameron talks of the rich legacy of memories that the past Olympic Games will hold for generations to come!  Even more strangely, we extrapolate from the present to a definition of future events with the dexterity of creators, the ideas that occur identifying reality that has yet to manifest itself.
In this close association of ideas and existence forms, how on earth could there have been a distinction formed between mind and matter?  Matter, surely, is identified in all its forms and phases, and is never distinct from the mind that identifies; in fact, ideas of mind and things of matter are one and the same in identity realisation.  For example, it is said a stone I pick up from the ground is an example of matter, as against the idea of a stone which is exactly representative, even to the idea of the stone’s roughness and hardness; but, when one thinks about it, when I look at a stone, it is the idea that defines all its properties, of size, weight, roughness, prior to my decision to pick it up and declare it a material object: the idea of the stone is its definition of materiality.   In fact, every movement we make assumes the idea formation in everything perceived, judging from which we act.
The universe in all its forms of planets, stars and galaxies, as well as all the entities of quantum mechanics, are all identified that defines the perception of them.  Science defines everything in terms of identity, something impossible, since it implies fixity; however, it is only when identified that things can be said to exist and affect each other.  Science cannot operate without identity realisation in what it perceives; and that is proved in the fact of being retained as idea form.  Yet, this is all very unscientific, since one has to define identity, not merely as realisation in perception of objects, but how objects in their existence are defined in identity terms only.