Urban Rainwater Harvesting: The Only Way Out 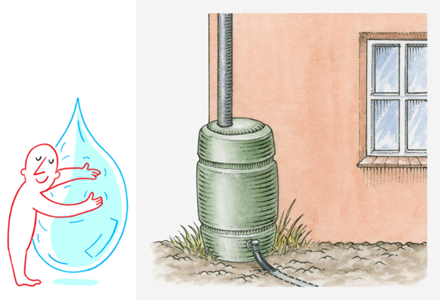 The urban areas of India are facing peculiar problems. During the monsoon all the major cities, especially of northern, eastern and western India face almost deluge like conditions. The rivers may not be in spate yet the residents have to often shift to roof tops to save themselves. People frequently end up paying heavy penalty for furniture, clothing and bedding items soiled by water.

Why such sudden deluges have increased suddenly in the past few years? One often thinks. This is because urban areas have been heavily concretized and the storm water drains have, either been encroached upon or drains have not been made or the rivers have been jacketed and the bunds thus made, stop the surface run off water from reaching the river.

On the other hand, the urban areas are facing perpetual drinking water crisis. Water is a state subject. Water is supplied for an hour or two in the morning and again in the evening. Reason is simple; demand is more than supply. Most of the Indian urban areas are on the banks of rivers. Earlier the rivers were considered sacred and kept clean. They are considered sacred even now, but only in a ritualistic sense. Normally they are taken as a refuge carrier. Consequently, the river waters are now not potable without treatment.

The other source of drinking water and also for irrigation is ground water. Daily we read reports of water levels going down. A Central Ground Water Board’s estimate says that the ground water levels in the Ganga-Yamuna interfluve went down @ of four cm per annum between 2002 and 2009. This is in fact an average figure. At places it has gone down drastically by about a meter per annum. Again the reason is simple, ground water being easily accessible to people with a fat purse, indiscriminate puncturing of ground for making tube-wells is rampant. The rain being the only source of rejuvenation of groundwater has become erratic. As a result recharge is much less than the demand.

Under such circumstances the only ray of hope in this dark tunnel is a systematic Roof Top Rainwater Harvesting (RWH). This method is now a days especially significant because in an endeavor to develop cleaner cities the ground surface has been paved with concrete or tiles. Rain water on such surfaces is not able to penetrate and seep down to the coffers of ground water. There are two pitfalls in RWH, which we must know. The first one is chances of pollution of the water accumulating in the pit due to a dirty roof or a polluted atmosphere. However, these are not difficult to take care of. Water from the initial rain is not allowed to enter the RWH pit and this process also wipes clean the roof of all the possible chances of contamination. As a further precaution the strainer at the mouth of the pipe carrying water to the pit takes care of polluted matter from entering the pit entering.

The second problem is certainly more perilous than the first one. The rivers in the alluvial terrain have a peculiar nature of either giving water to the aquifer or they take water from the aquifer. These rivers, including the mighty Ganga survive in the plains merely on this give and take relationship. Therefore, if someone is residing within one kilometer radius of the river, he must find out, whether the river in that particular stretch is taking water or giving water to the aquifer. If it is the former, then a surface water harvesting may prove to be a better solution, provided there is sufficient space and money available with the harvester. It is always better to seek help of the concerned ground water authority of the locality, for example, the Central Ground Water Board or the Ground Water Boards of the states have this information with them.

What is the potential of RWH in India?

Rain Water Harvesting is like a small scale savings or saving in a piggy bank. But ultimate result is beyond imagination. For example, a plot of 250 square meters can yield 125000 liters of water in case of a 1000 mm rain during the season. Ultimately, the aquifer may get only 60% of this amount of water, i.e. 75000 liters. In other words the plot will add 250 liter water per day to the aquifer and a family of five would get 50 liter of water per day per head. Imagine this scenario in a residential colony where there may be hundreds of such dwellings and the total availability of water would go on multiplying.

However, in this method there is a catch. There may be many who cannot afford to install the RWH in their rooftops and also make the required subsurface pit etc. Plus this method may not be ideal for the villages where the roof areas are very small or at times the roofs are thatched and sloping.

Therefore, a larger version of RWH can be done by the government. This would include diverting and directing all the surface water of urban areas to the sub-surface. In Japan this method is quite common, where all the concrete pavements and storm water drains transfer their water to drains leading to the subsurface and aquifers get easily recharged. The advantages of this method are two folds. One it augments the water content of the aquifer and secondly since much of the water is diverted, the storm water drains are de-stressed. This checks the water logging and reduces the risk of urban floods-a common phenomenon in India now-a-days.

A word of caution:

Lastly, if the collected rain water is to be used as drinking water, then under any situation it should be properly treated before supplying to the consumer. The habitat surfaces of India, whether urban or rural are highly polluted and the chances of E-coli bacteria seeping in to harvested water are always there. That is why a treatment is a must.

Rain water harvesting is now the only way out to save the future generation from thirst. If we want our civilization to survive and thrive, there is no other alternative.