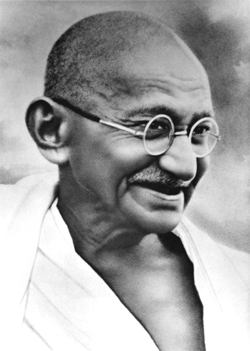 Mohandas Karmachand Gandhi was intrinsically an idealist, but historical circumstances had thrown him in a totally pragmatic world of politics. In all his writings and most of his actions he took an unflinching idealist instance. However, his idealism rested so deep in his heart that any incident of injustice to a person or a social group compelled him to act for reform of the perpetrator's heart. This uncontrollable trait turned him gradually from an introvert youngster to a proactive extrovert man. This was so even in matters of national and international politics, where he insisted that adherence to Satya and Ahimsa would ultimately succeed. Thus his ideas and actions gave birth to a new culture of politics which was in some respects an antithesis of ancient India's greatest pragmatic political thinker - Kautilya's thesis.

Gandhi drew from ancient scriptures the concept of soul-force as against the body-force. In Gandhi's view 'Satyagraha is a method of securing rights by personal suffering; it is the reverse of resistance by arms. When I refuse to do a thing which is repugnant to my conscience, I use soul force. ..... It involves sacrifice of self. The quest for truth involves Tapas or self-suffering, sometimes even unto death. There can be no place in it for even a trace of self-interest.........There is no place in it for cowardice, no place for defeat.'

Gandhi also asserted that 'I believe that a State can be administered on a non-violent basis if the vast majority of the people are non-violent. So far as I know, India is the only country which has a possibility of being such a state. Supposing, therefore, that India attained independence through non-violence, India could retain it too by the same means.' - Harijan 13th April, 1940

Gandhi perceived that in Swaraj the 'police will be composed of believers in non-violence. They will be servants, not masters of the people. The people will instinctively render them every help, and through mutual cooperation they will easily deal with ever-decreasing disturbances. The police force will have some kind of arms, but they will be rarely used, if at all. In fact the policemen will be reformers.- 'Harijan'

'For Gandhi, political freedom was necessary but was not the only goal because, even after the withdrawal of the British political rule, the foreign capital would continue to function with the collaboration of indigenous capital. Furthermore, the cessation of economic exploitation did not by itself end cultural and moral domination. For Gandhi, the solution lay in Swaraj rather than mere political freedom. Swaraj was a positive and cultural concept, based on a critical evaluation of what Gandhi terms as 'civilizational process'. ... Swaraj was a form of collective integrity, a community's mode of being'.

Gandhi’s Beliefs About Culture of Politics

Following quotations from Mahatma Gandhi's writings and speeches will give some insight into his culture of politics:

Nature knows only one law which is the 'Law of Incessant Change' and it knows only one ideal which is the 'Ideal (in reality selfish goal) of Survival of the Fittest'.  Therefore, in accordance with the former everybody - animate or inanimate -, and every action or idea are programmed at the time of their birth itself to change incessantly leading ultimately to their complete degeneration. And in accordance with the latter, mercilessly selfish and totally pragmatic persons, groups and ideas are more likely to survive and thrive than others- particularly unflinching idealists. Although human-beings and to some extent all living-beings are additionally programmed for compassion towards other living-beings but in most cases only to a degree that it does not effectively hamper one's own survival, pleasure or goals. However, this program propels some of them towards idealistic altruism even at the cost of one's discomfort and sometimes even at the cost of one's life. Gandhi was one such person.

Gandhi preached the path of idealism - Satya, Ahimsa and Tapasya - for achieving Swaraj. He also pursued the same in personal and political conduct. During this period India had already faced defeat and subjugation for centuries and did not have confidence to throw away the foreign yoke by force. The economic exploitation, religious torture and slavery imposed by foreign invaders which Indians had faced in the past had made them meek yet bully, mean yet megalomaniac and fallen yet apparently religious. They had turned into a herd that desperately needed and desired a pathfinder.  Gandhi's lifestyle, teachings and methods synchronized with the image of an ideal leader in the common Indian's mind so well that they started seeing in him the true liberator from their miseries. By adopting a lifestyle of the poorest Indian and serving them physically to mitigate their sufferings, he generated unlimited empathy - particularly with the depressed and downtrodden which were aplenty. Thus, barring the vested-interest-class of Zamindars, almost entire nation started having implicit faith in him. They followed him unquestioningly whenever he gave a call for satyagraha or non-violent civil disobedience. He motivated young generation towards probity in personal and official conduct. The political class, which during his lifetime comprised mostly of those who had sacrificed their career and comfort for the nation, also remained motivated by his ideals.

Unfortunately, devolution of power in the hands of Indian politicians and demise of Gandhi came almost together. Once Gandhi was gone from the scene and power started tasting too sugary to Indian politicians, the basic weaknesses of character acquired over the centuries of subjugation by Indians- meanness, untrustworthiness and corruption- started taking predominance over idealism. Since the goal of independence had been achieved, now there remained no compulsive motivation for sacrifice of the self, nor there was the towering influence of Gandhi; so for the politicians the time became ripe for indulging in plunder of public money through governmental agencies.

People also got disillusioned with Gandhi’s certain principles when Gandhian culture of politics of adherence to Satya, Ahimsa, Tapasya, Aparigrah, and victory through change of heart failed the test in tackling the international issues. Nehru tried change of heart of China through Panchsheel and was humiliated in war by China. Nehru not only failed to resolve the Kashmir crisis but also created a festering wound for perpetuity by idealistic approach of referring this matter to U.N.O. At the same time some bold steps combined with threat to use force, solved many problems like those of Hyderabad, Goa, Sikkim, etc.

Gandhi’s assertion that essence of all religions is one also did not pass the test of time. Because of this belief he did not permit complete transfer of population from India while Pakistanis did it mercilessly and treated those who were left behind as second class citizens. So has been the case even in Bangla Desh, which was created by Indian support only. It is too naive to think that essence of all religions is one when followers of some religion vehemently assert that their God is the only true God and all other God’s are false Gods. Moreover, the belief that their religion is ordained to dominate the entire world causes immeasurable incongruities for establishment and continuation of peace on Gandhian principles.

Despite very important victories of Gandhi's principles elsewhere, these failures created serious doubts in many minds about some of his ultra-idealist views. And politics being essentially a game of unprincipled, the politicians started mercilessly violating his principles while shamelessly using his name to attain power. This process lead to a situation where even abusing Gandhi became a useful tool to win elections for some crooked politicians.

Gandhi was quite right in enunciating that 'A nation's culture resides in the hearts and in the soul of its people'.  During Gandhi's times the culture that the Indians had inherited and that resided in their hearts and soul was not ancient Indian culture but an anti-culture developed during the long centuries of dependence and slavery. Gandhi succeeded in making Indians awaken about their ancient culture of idealistic virtues and uniting the nation to fight the British through non-violent adherence to truth and justice. His idealism carried the nation to attain independence, to frame and adopt a secular and democratic constitution and to let the torch of democracy light our path through thick and thin during the past six and half decades; while our neighbors who were not lucky enough to have a Gandhi, repeatedly indulged in tyrannical despotism.