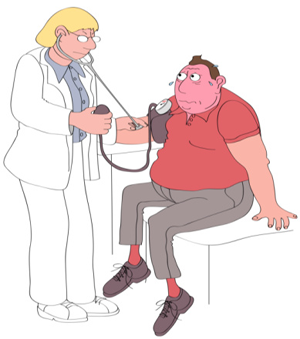 The term "hypertension" literally means an abnormally raised arterial blood pressure, popularly known as 'high blood pressure'. Many conditions like kidney disease, hyperthyroidism (thyroid over activity), and endocrinal and vascular disorders cause secondary hypertension (cause known). But in 80 to 85% of patients of hypertension, where no cause is evident, it is labeled as essential hypertension. It is a leading risk factor for heart disease and stroke worldwide. Hypertension puts undue load on the heart and arteries, resulting in damage to delicate tissues. If left untreated, it eventually affects the eyes, brain, and the kidneys. Higher the blood pressure, greater is the risk that complications like a heart attack (myocardial infarction), coronary artery disease, or stroke may occur.

In early stages hypertension doesn't cause any symptoms, and then by the time symptoms appear, significant damage in the form of heart disease, vision, or kidney problems, or in men, erectile dysfunction has already occurred. This is the reason why hypertension is called '"the silent killer". Usually the young and middle-aged men are involved. If the blood pressure (BP) is very high symptoms like headache, dizziness and blurred vision may occur at a later stage of the disease. With increasing Life Expectancy (LE) in Indians, early and proper management of hypertension is all the more important.

According to a WHO study conducted this year on males and females aged 50 years or more in six countries including India the findings are rather worrying. This study on Global Ageing and Adult Health (SAGE) reveals that 87.9% men and 93.5% women get insufficient nutrition, while 24% men and 26% women undertake low physical activity.

Around one in four men, and equal number of women suffer from high blood pressure. Further, 63% men and 30% women are smokers. Regarding abdominal obesity 3 in 4 men and 4 in 5 women in this age group have a high risk waist-hip ratio or abdominal obesity which greatly increases cardiovascular disease risk.

As simple test for obesity in males is that the moment one starts noticing difficulty in tying one's shoe laces, beware, one is becoming obese. Moreover, projected studies conclude that the average like span of Indians will continue to increase over the next decade (Source: National Health Profile, 2011). Thus, more care has to be provided to the middle-aged and elderly population of the country.

Regarding blood pressure (BP) values, it is agreed that if the values of systolic/diastolic BP on repeated determinations exceed 140/90 mm Hg, it is likely that the person is suffering from hypertension (the top number "systolic pressure" is the pressure within the blood vessels during a contraction of the heart, i.e., systole; the bottom number "diastolic pressure" is the pressure in the vessels between two heart beats when the heart is at rest, i.e., diastole). Further grading of hypertension based on large population studies is as under:

Several groups of drugs are used to control hypertension including diuretics, angiotensin receptor antagonists, beta-blockers, calcium channel blockers, vasodilators, potassium channel openers, and drugs that antagonise the activity of the sympathetic nervous system (sympatholytic drugs). Many hypertensives require 2 or more than 2 drugs to bring down their BP within the normal range. Treatment has to be tailored to the needs of the patient to strike a balance between the beneficial effects and side effects of the drugs.

Lifestyle modification with relaxation measures and Yoga; weight reduction in the obese; salt and fat restricted diet (low sodium with increased potassium); controlling hypercholesterolaemia; and stoppage of smoking by smokers is desirable. Such measures are essential to control the risk factors.