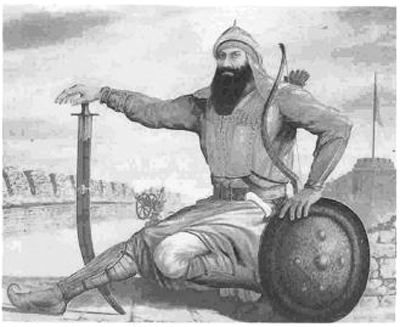 On the banks of the five rivers,
Up rise the Sikhs spontaneous;
With hair coiled above their head
Inspired by the Mantra their Guru spread
Fearless and unyielding…..
"Glory to Guruji" – thousands of them
Resound the horizon;
At the rising sun of the dawn
The Sikhs stare with deep emotion
With new awakening.
"Alakha Niranjan!" (means 'Holy Spotless'= God)
The war cry of the rebellion;
Let loose their chivalry;
On their ribs clank swords luminary;
In wild joy was Punjab's insurrection
"Alakha Niranjan!"

There came a day,
Thousands of hearts were on their way
Without any binding or fear,
Life and death at their feet slaves mere;
There on the banks of those rivers
The tale of that day still shivers.

At the tower of the Delhi palace,
Where the Sikhs are apace –
The Badshajada's (*) drowsy spell (*= Emperor)
Time and again they quell;
Whose voices there, the dark sky tear?
Whose torches set the horizon afire?

On the banks of the rivers five,
For supreme sacrifice was their dive,
Unleashed there was the flood
Of the devotees’ blood.
From thousands of hearts torn apart
For destination divine in their lark –
The heroes putting their sacred blood mark
On the forehead of their motherland
There around the five rivers so dear and grand.

In the Mughol and Sikh battle
Their embrace to each other throttle
Like the fight between the eagle and snake,
Deep bruises one to the other did make.
In the fierce fight of that day –
In blood craze "Din Din" the Mughols bay,
"Glory to Guruji" – was the Sikh's commotion
In their divine devotion.

At Gurudaspur castle
When Banda was captured amidst all bustle
In the hands of the Turani troop,
As if a lion fettered with his group;
To capital Delhi they were taken,
Alas, at Gurudaspur Banda was beaten!

The Mughol soldiers march ahead,
Kicking up the road dust in sneer,
Hoisting the Sikh's chopped head
At the blade of their spear.
Follow them Sikhs seven hundred,
Tinkles their chain,
Throng people on the road widespread,
Windows open – a glimpse they fain,
"Glory to Guruji", the Sikhs roar,
For fear of life none is sore,
Sikhs with the Mughols to-day,
Stormed the Delhi road all in gay.

Started the scurry,
For lead in the carnage was their hurry;
They line up at the dawn
Defiant till their execution.
"Glory to Guruji" was their slogan
Until they were done.
Thus over a week,
The arena turned bleak;
With seven hundred lives gone –
Upon the martyrs' immortalization.

On the last round of cruelty
Banda was ordered by the Kazi (=judge)
To kill his own son,
At ease to be done.
In mere teen was the boy,
With hands tied thrown as a toy
Into the lap of Banda and without a word
He drew him close to his heart.
For a while he put his hand on his head,
Just once kissed his turban red.
He then draws his dagger,
Whispers in the child's ear –
"Glory be to Guruji – fear not my son"
A virile in the boy's face did burn –
In his juvenile voice the court did ring
"Glory to Guruji" as he did sing.

With his left hand Banda held the boy,
With right struck the dagger in his ploy,
"Glory be to Guruji", was all he did implore
As he took to the floor.
Silence fell in the court,
Guruji's inspiration still not abort.
Then with tong red hot
Banda's body was pieced apart;
A word of moan he uttered not
And all in calm did he depart.
As stopped his heart throb
Witnesses closed eyes – silence choked pin drop.

Translator’s Note:
This poem is based on the anthology of the British historian Todd. The facts narrated by Todd have not been distorted in this poem. However, this is one of the poems where Tagore upholds that the seeming defeat of the Sikhs was a victory in the test of history. It was the victory of their spirituality over the brutal force they had to encounter. That is why Sikh ideal survives as a dynamic force, one of the noble heritages that will propel the Indian nation forward. And what happened to the omnipotent rulers (Mughols) who had let the hell loose on this beautiful earth, cultivated cruelty and inhumanity at its highest and appeared invincible?

In the words of the Poet –

"With blood stained sword in hand, with their bloody look,
They hide face in the children's lesson book……………"