Churning of the Ocean 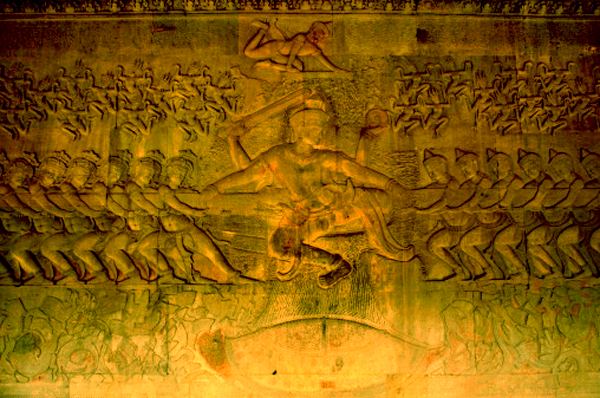 Bas-relief of the churning of the sea of milk in Angor Wat temple, cambodia
shows Vishnu in the centre, his turtle Avatar Kurma below,
asuras and devas to left and right, and apsaras and Indra above


Indian mythology mentions the churning of the sea of milk, where the demons and the gods undertook using Vasuki as the rope. This phenomenon may be considered as pure imagination bordering superstition.

But not any more.  It may not be a wild guess after all, especially after the onset of the present Hurricane Sandy in the region of the Caribbean island of Haiti in south and surprisingly the other end that brings a cold front lying in Canada on the north. It is almost covering the entire northern hemisphere with a radius of 800 km, spreading from Carolina to Massachusetts and Ohio on the west to deep into the Atlantic Ocean. Such a vast one has never been experienced before. This, in fact, is the great churning of the ocean, the entire Atlantic is in turbulence. It  indirectly warns man and his modern scientific world that nature reigns supreme. It proves that nature was, is and shall ever be beyond man’s reach.

The ancients in India had no weather satellites, there were no meteorogical departments and no meteorologists. Under such circumstances they took recourse to their ingenuine methods to explain such supernatural phenomenon.

However, at this juncture man has one option. That is, let us pray that the outcome of this unprecedented churning be nectar, lotus, moon, the goddess of wealth and not the poison. All these were the outcome of the mythological churning of the sea of milk. Lord Shiva had then at the request of all swallowed the poison to save the universe and kept it in his throat that turned blue earning him the name Neelakanth (the one whose throat is blue).

Let us pray to invoke Lord Shiva to swallow the poison to keep the universe safe again.