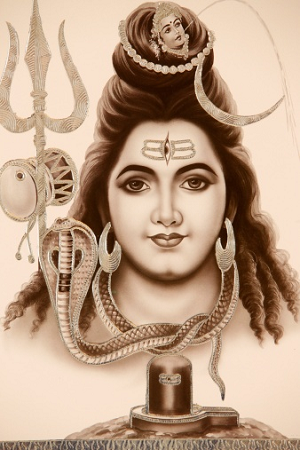 Kashmir Shaivism emerged from the soil of Kashmir during the 8th Century of our era with its own specific ethos and orientation. It is religio-philosophical system elaborated mostly in the Pratyabhijna Darshana which means recognition of self. According to this philosophy, Parama Shiva is the ultimate reality who is the nature of Bliss and all complete in himself. He is beyond description, beyond time and space. Shiva voluntarily adopts self –veiling. The Shakti is Shiva’s power of manifestation. When there is self – reflection of Shiva, Shakti serving as a mirror, there emerges the ego or the “I” in Shiva. Since there is nothing apart from or independent of Shiva, the elements of Universe can be nothing but Shiva himself. The constituent element of the Universe, which are ‘constant’ through ‘Shristi and Pralaya’ are called tattvas or categories. Shristi which is nothing but manifestation is described as opening out and Pralaya as closing down as the bud. The soul in different tattavas is given different names as ‘Pramatas’.

As many as eight schools of Shaivism developed in different times in different parts of India. The ‘Trika’ School, however, appears to be exceptionally rich in so far as the philosophical literature is concerned. Kashmir Shaivism is called ‘Trika Sastra’, because it is the philosophy of the triad : (1) Shiva (2) Shakti (3) Nara or (1) Para – the highest (2) Parapara – identity with difference and (3) Apara – the difference. Trika – Shastra explains three modes of knowledge of reality e.g non-dual (adheda), non-dual-cum-dual (bhedabheda) and dual (bheda). ‘Trika’ school devotes itself extensively on the means to be employed by the man to realize its real self. A man becomes general by recognition of himself. No nation can achieve its desired national aims without the help of suitable philosophy. Kashmir Shaivism, a deep rooted philosophy, can urge and inspire a nation towards its national aims as well as brotherhood, universal fraternity.

The ‘Trika’ system is purely monistic system of Shaiva philosophy.

Reading of the philosophy of the ‘Trika’ school should make us realize our inherent unity with Shiva and realize that we are the divinity. This concept of unity with Parama Shiva, the supreme reality, eradicates malice or enmity and transit love, peace as well as Universal Fraternity.

The Advaita (non-dualistic) branch flourished as the ‘Trika School’ in Kashmir. The founder of ‘Trika’ school of Shaivism was Vasugupta (825 A.D).

In general, the whole written tradition of Shaivism can be divided in three fundamental parts: Agama Sastra, Spanda Sastra and Pratyabhijna Sastra, Abhinavagupta was a prolific writer on Shiva Pratyabhijnavada. His ‘Paramarthasara’ is a fundamental text of Kashmir Shaivism. The Pratyabhijna – Sastra is really the philosophical branch of ‘Trika’ school. ‘Pratyabhijna’ means recognition and refers to the spontaneous recognition of divine nature in each human being (Atman). Pratyabhijnavada refers to spiritual search which can make human being noble, generous ands broadminded. According to this philosophy, Shiva is a supreme reality, divinity and consciousness. He is the nature and existence of all beings. Parama Shiva simultaneously assumes two apparently contradictory forms: the universe in its infinite variety and transcendent lord by which one can realize his own innate divinity that lies within him also exists outside him, everywhere and in all object. Sense of divinity also can unite people and awaken brotherhood.

Upanisads teach the identity of Atma with Brahma is omniscient. He is unknowable, except by himself. Union with Brahma is emphasized frequently in the early Upanisad.  Brahma is described precisely as paramount, disposer of life, creator of all creatures. By the knowledge of Brahma one can observe himself in every objects both inanimates and human beings. Thus seed of universal love and brotherhood can be planted in human mind. Teaching of universal fraternity also has been enunciated in Upanisads.

By the Kashmir Shaivism the realization of Shiva gives knowledge of everything by identity with everything. To recognize oneself as Parama Shiva means to realize his real self. Knowledge of self – perception can be achieved from the teaching of Shaivism. From self-perception universal consciousness as well as sense of love for everyone can stimulate very few who have extremely high spiritual and intellectual level of inner self.

The Kashmir Shaivism is the most pure, elevated and direct spiritual path. It is extremely interesting to note that this path is very close to the esoteric Christianity. In Kashmir Shaivism just as in Christianity, the main emphasis is placed on the awakening of the heart.

Saraswat Brahmanism softened to become Shaivism and Islam mellowed down to become Sufism. As Shaivism and Sufism intermingled, what emerged was as a group of people with an object understanding of life and beliefs. The embodiment of Universal brotherhood and love for all were a chain of rishis, saints and Sufis who roamed place to place attracting instant followers.