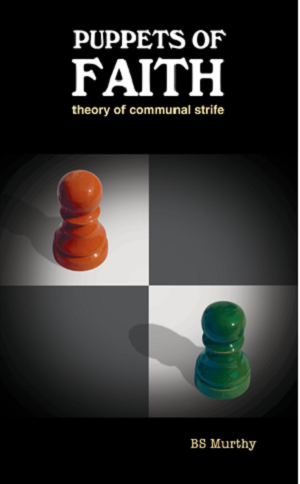 The lava of the volcano on which the world sits is the disaffection the Musalmans nurse towards the kafirs. While its chemistry world over is the Islamic religious rigidity, in India it is compounded by the Hindu ‘historical’ hurt, aggravated by the Muslim-appeasing political ethos of the State. It’s thus the Indian landscape is dotted with many of its earlier eruptions, but the one, in the wake of Godhra’s ‘burning train’ in 2002, affected everyone as never before. That a fanatical band of Musalmans should dare torch their Ram Sevaks in a railway coach of that Sabarmati Express seemed to the Sangh Parivar like Saladin crossing the Lakshman Rekha. And that the dalits too joined the hysterical Hindu mobs to burn their persons and property was beyond belief to the ghettoed Musalmans nevermind that many among the rioters were felled by police bullets.

In that setting, the prospect of a new-found Hindu unity spoiling their electoral party was something galling to the pseudo-secular politicians, who have been icing their caste-divisive Hindu electoral cake with the cream of the consolidated Muslim votes. The self-serving fourth estate that meanwhile expanded its ‘mass’ base, courtesy the idiot box, saw in all this a godsend ‘breaking news’, enabling the Islamapologic columnists (Islamapologia is about condescending to descend to the Musalmans) as well as Islam-naïve Hindu intellectuals to score a Brownie point or two into the Indian pseudo-secular goal. Not the ones to miss any opportunity for Hindu bashing, the ideologically afflicted left-liberals, as well as the half-read Hindu columnists, who ever shy as ever to stare at the Islamic fundamentalism straight in its face, had joined the anti-Hindutva bandwagon albeit by pushing the ghastly Godhra manifestation of Islamism under the secular carpet. Above all, the politicians of all ‘secular’ hues, alive as they are to every opportunity that presents itself to consolidate their Islamist constituencies, wouldn’t let this pass; so, they were in no hurry to leave the scene, but continued to stoke the communal fires to keep the electorate warm.

But yet to sustain the public interest for the sake of its profitability, even as the media needed to name a villain and focus its spotlight on him, Sonia the Italian, who had long usurped the grand old party of India, invented the one for it in Narendra Damodardas Modi, the Chief Minister of the riot-torn Gujarat and dubbed him maut ka saudagar (merchant of death) unfairly though. It’s another matter however, that the media-maligned Modi, after many trials and tribulations, was anointed by Indians as their mukhiya (head), after a Hindu pushkara (12 years), to become the harbinger of the much need change, overdue by a long shot that is. History is naughty for it first creates chaos and then brings about order.

But the problem with a problem is that until one admits that it exists, one cannot address it, and unless it is addressed, it persists. Make no mistake here is this Musalmans disaffection for kafirs for the world to contend with, and the Hindu-Muslim discord is but its Indian variation. The pseudo-secular sophistry has it that when it comes to the basic tenets, all religions carry a premium on peace and all the believers seek social harmony but for a few misguided fanatical elements on either side of the communal divide.

However, sadly though, the ground reality is that to the average Hindu, it seems as if the Musalmans suffer from the symptoms of Islamic fever caused by a diseased mind-set afflicted by the sharia fervor. The Muslim compliment to the Hindu is the contemptuous kafir, destined for hell and all that goes with it. Indeed, it is but owing to the glossing over of these entrenched misgivings by the pseudo-secular politicians, who cater to the Islamic whims of obscurantist mullahs and moulvis as a means of appeasing the umma, that the communal lava erupts periodically to hurt the tenuous Hindu-Muslim coexistence in India, ironically partitioned, based on the Islamic premise that the umma cannot coexist with the Hindus.

This book seeks to outline the background of the Musalman-kafir animosity on one hand, and the Hindu–Muslim communal divide on the other. It would seem that these are the products of one or more of the scriptural notions, religious dogmas, medieval history, and modern politics, or all put together. As one cannot understand man unless he understands his religion, all must be abreast of the basic religious tenets of the competing or conflicting faiths, more so the sectarian Semitic dispensations. Then, it would be revealing how the religious scriptures per se contribute to social discord and communal disaffection, and /or both. In the strife-torn world of ours, it’s our grasp of this canvas of conflict that might eventually enable us to paint the picture of peaceful coexistence of the faithful of mutually contradicting belief systems.

Thus, the social evolution as well as the spiritual ethos of Hinduism and Buddhism on one hand and that of the Judaism, Christianity, and Islam on the other are sketched here in its rudiments.  Also, since man carries the historical deadwood, in spite of himself, the history that connects and disconnects the Abrahamic faiths, and that which divides the Hindu-Muslim emotions is pictured for one to appreciate the background of their unceasing strife.

After all, there is more to religion than that meets the eye, which is the overriding faith and feeling of the believers in its divine inerrancy. Given that the Islamic creed is more so a product of Muhammad’s persona, the influence of his character in shaping the ethos of the umma has been analyzed. Won’t the Musalmans themselves concede that their endeavor would be to follow the straight path of Islam as earnestly as they could, as others, any way, have strayed onto the satanic path? Since it is this mind-set that makes the Musalmans apart in the religious sense, how this could possibly govern the Muslim psyche is scanned with “I’m Ok – You’re Ok” the famous work of Thomas A. Harris, with their religious creed from Roland E Miller’s “Muslim Friends–Their Faith and Feeling” as the probe.

Continued to "Advent of Dharma"