Rise Up for Better World

There is a beautiful story in Panchtantra. 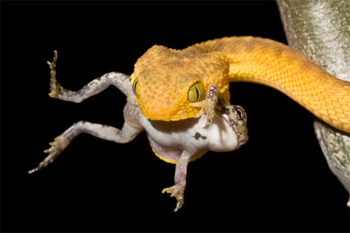 In a huge well lived two groups of frogs who were always fighting for territory and resources of the well. The king of one group who was very intelligent decided to befriend a cobra and get him into the well so that it could finish off the other group. The cobra came into the well and one by one started eating the frogs of the other group. The king was very happy with this development and felt that his aim of controlling the well and its resources was achieved. However soon the cobra ate all the frogs of the other group and turned his attention to the king's group. The cobra told the frog king that he needs food to survive and so is helpless. Despite king's pleas and entreaties, the cobra started eating the king's subjects and family members one by one and ultimately ate the king himself!

There is a general tendency in people specially those in power to take the help of negative and evil forces to achieve their goals, little realizing that these forces are nobody's friends and have their own agenda. They destroy everything in their wake including their creator and cannot be controlled once unleashed. It is therefore best to keep away from them and they should not be played with.

Nature also destroys the negative tendencies but in a very evolutionary and positive manner. The progress or evolution of species takes place by branching. Hence whichever branch gets into a dynamic equilibrium with the surroundings survives, grows and prospers. The other branch, which could not get into equilibrium with the surrounding forces, simply dies off and with it that branch of the species. Thus nature evolves by making the other branch irrelevant. This is a great lesson for all of us. If we want to show somebody down then the best way to do it is to rise higher than that person and make him/her irrelevant. In this process the whole system gets lifted and thus this process is far superior to the one in which the person is brought down using negative forces whereby the whole system looses. This has been taught in all the great religions of the world and is the basis of victory of nonviolence. However to rise up requires great courage, conviction, faith in oneself and internal security.

Sometimes when the evolutionary process goes out of hand and nature cannot solve it by branching, then it removes the species violently as happened in the death of dinosaurs and wiping out of certain species by volcanic events etc. Generally such cataclysmic events are less frequent and the natural process is mostly effected by branching.

How can one make negative or evil forces irrelevant? Patanjali in his Yoga Darshan recommends that one should show indifference to these forces. Thus by not opposing them but by being indifferent to them and acting positively we can make the system evolve so that these forces become irrelevant and die their natural death. Similarly one should not think negatively about others even if they have harmed us because the very act of thinking about a negative person brings his/her negativity to our mind. Thinking deeply is a two way street. We can send thought packets as well as receive them whenever our minds are anchored to the object of perception. In fact the very act of perception means that the information packets from the object of perception will be received. The same applies to thinking about somebody's mind.

Human beings also have tremendous propensity to humiliate other humans. We seem to get pleasure in bringing others down and in seeing them in misery. This is a general human tendency though this world is also full of examples of great people like Edison, Ford, Faraday etc. who have produced great inventions to remove the misery of humans and make the life of mankind better. Similarly the humanitarian work of Gandhi, Christ, Buddha etc. has also helped mankind. Nevertheless the tendency to create miseries for others could be traced to the evolutionary process whereby to gain control over resources it was necessary to remove the competition and humiliation and pulling down others was a part of this process. However if we realize that by reducing our needs and becoming spiritual we can become better human beings then we do not need to control others and create conditions to fight for the resources. This world can therefore become a much better place if we make ourselves better so that we rise above others and pull the whole system up.