Industrialization in a Land Hungry State

A Lesson from Robert Solow 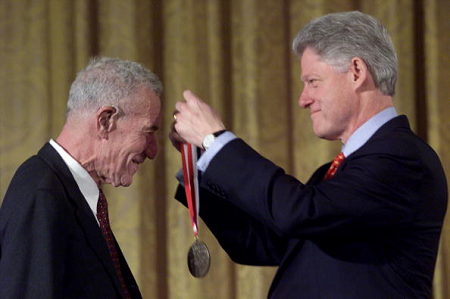 US President Bill Clinton presents Robert Solow,
from Massachusetts Institute of Technology,
the National Medal of Sciences for his work on economics
on 14 March 2000 in Washington, DC.
(Image (c) Stephen Jaffe - AFP/Gettyimages.)

If surviving the test of time is proof of quality, then MIT Nobel Laureate Robert M. Solow’s model of economic growth has surely distinguished itself with flying colours. The work was published as far back in time as 1956 and survives in the academic world till this day, despite the ruthless attack it had to face from Professor Joan Robinson of Cambridge, UK and her associates. Rightly or wrongly, the latter questioned the logical underpinnings of Solow’s work and the debate was intense enough to metamorphose childhood friends into bitter enemies belonging to opposite camps in their adulthood. The controversies ultimately waned out though, possibly on account of a workable alternative model of economic growth that the critics failed to provide.

The Solovian prescription for growth and the plans for West Bengal’s industrialization, one might suspect, are strange bedfellows. However, this, curiously enough, may not be the case. For sustained growth, Solow visualizes all means of production to be growing at the same rate in the long run. The situation resembles the cloning of production organizations, two of which, identical in all respects, particularly in the use of resources, would produce double the output produced by one, three producing three times and so on. Amongst the resources, population, which acts as a proxy for the labour force, is controlled by demographic rather than economic activities. Thus, all other inputs, most importantly capital, need to adjust and grow at the same rate as labour and this in turn leads output too to grow at the same rate.

Interestingly enough, Solow was not overly worried about the land problem. His cloning exercise involves replication of production organizations that are identical in their use of capital and labour. But common sense suggests that two factories that use identical quantities of capital and labour, can be constructed only on similar plots of land. On the other hand, while both capital and labour can expand endlessly, at least for argument’s sake, the total quantum of land available on the planet is physically limited. Thus, Solow’s cloning comes up against a major barrier, viz. the scarcity of land, unless of course one imagines production units to grow vertically upwards in search of the moon rather than spread horizontally.

Land of course does not concern Slow. But if it did, how should he have proceeded? The answer could probably be found in the special manner in which labour is treated in his work. A worker is both an embodiment of nature endowed muscle power as well as socially available technological skills. The stock of muscle power grows with the population. This is the demography story. Technological skills multiply too over time, but Solow was vague at best as far as the technology tale went. What he was clear about though was that his labour resource was separable into two parts, ability to work and the skill associated with that ability. The cloning in Solow’s model involves replication of capital and the joint person cum skill input. Capital and the joint input, and hence output, grow at the same rate in the long run, but the joint input itself grows at a higher rate than the rate of growth of population in isolation, since its growth rate is the sum of the growth rates of population and technology. Consequently, even as output grows at the same rate as the joint population cum skill input, it grows faster than population. This means that output finally grows faster than population so that per capita output rises in the long run, which is the objective of economic growth and development in most societies.

Economics text-books assert that the extra output one can squeeze out of fixed size inputs diminishes with each extra squeeze with the help of inputs capable of growth. Therefore, in the absence of skill formation, as we are temporarily assuming, if capital were to rise at a higher rate than the growth in population, then the resulting output would be growing at ever slower rates. The only steady growth the system will be able to handle would involve capital, unskilled labour as well as output growing at the same rate. To the extent then that a rise in output per head of population is a desired goal of development, the Solow model has a pretty dreary prediction to make if skills fail to grow.

Speaking more broadly, skill improvement signifies technical progress and the Solow message is that per capita output growth is not sustainable in the absence of a simultaneous growth in technology. Solow restricted his exercise to capital and labour resources alone. However, there is no reason why we should not interpret his work to include non-augmentable land too. Just as skilled labour qualifies for a larger number of workers than a mere a headcount, so should land services not be judged by the geographical size of land alone. Like labour, effective land size could be larger than its physical size in the presence of land augmenting technical progress.

Given this Solow insight, it is not enough for the authorities in charge of this land scarce state to simply send blank invitations to industrialists to invest in employment generating projects. Instead of adopting a rigid stand on land policy, attracting thereby criticisms from its political opponents and raising doubts in the minds of potential investors, the government might be able to do far better by laying down an acceptable road map for the sort of industries the Bengal economy should be able to cope with. As matters stand now, such industries ought to be equipped with technologies that are simultaneously labour intensive and frugal in the use of land.

A number of service sectors might easily qualify, though it is doubtful that the IT sector belongs to this category. The IT sector is mostly skilled labour intensive and, as elsewhere in the Indian economy, its growth, however phenomenal, holds little promise for unskilled or semi-skilled employment generation in a large scale. Heavy manufacture too cannot qualify as was evident during the 600 acres controversy in Singur’s Nano factory.

It makes little sense therefore to throw open the land markets to all and sundry. Land being scarce, its market price will be prohibitively high for new ventures to be initiated. A far better idea could be to set up an expert group to identify those industries alone that are endowed with technology that is either capable of converting small land holdings into effectively large ones or require small land holdings relative to output. These are the industries that the government should be luring into the state by offering whatever incentives it is in a position to offer.

Despite the clamour raised by the Chambers of Commerce, it is unlikely that large scale industries will fulfill the criterion. Agro-industries backed up by multiple cropping could well be a solution. The hotel industry in remote tourist spots could work as well. Both are semi-skilled labour intensive and hotels can actually expand vertically. The list, even if short, needs to be carefully prepared instead of wearing the mask of an unqualified industry friendly face. Even if a large industry or two were to move into the land hungry state, it cannot open the floodgates for heavy industrialization. Instead of criticizing and lamenting over the impossible therefore, our time will be far better spent in discovering the possible.

Originally published in The Telegraph, Calcutta on January 1, 2013 under the title Exploring the Possible.