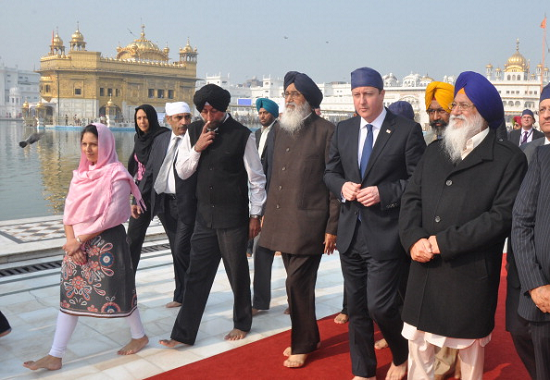 Prime Minister David Cameron of Britain began his three-day visit to India by invoking the “huge ties” between the two countries of “history, language, culture and business.” One wonders which particular aspect of the shared history of the two nations he found supportive of his current quest for broadened economic linkages.

Could it be what the East India Company did after bribing its way to control of Bengal, the richest province of Mughal India? Within a decade of the so-called “Battle of Plassey” (Pilashi) in 1757, Bengal lay in ruins. The destruction of its economy was so severe a third of the population, some five million people, died of starvation in the first of the great "man-made famines" British rule spread across India. A conservative estimate of the overall toll of such famines is 100 million. Or perhaps Mr. Cameron found inspiring the theft of the fabled Kohinoor diamond after the British defeated the Sikhs almost a century later. Maharaja Ranjit Singh's 11-year old grandson went with the diamond to Britain where it became part of the “Crown Jewels” and he was comprehensively debauched with drugs and sex to disable his potential as a leader. Or maybe the Prime Minister is enthralled by the post-1857 “pacification” that involved the indiscriminate slaughter of some 10 million civilians, men, women and children.

Mr. Cameron's historic admission that the 1919 Jallianwalla Bagh massacre was a “deep shame” does not begin to address the long line of British atrocities in India, most of which remain officially unacknowledged. They are systematically ignored or downplayed even in works of history by British scholars supposedly engaged in the pursuit of truth.

That is true not just of the colonial era. There is no honest British account of the cold-blooded manipulation of communal violence that led to Partition, the killing of well over a million people and the biggest migration in history as 14 million people were forced from their ancestral lands.

Nor is there admission that Britain created Pakistan as its proxy in South Asia and that it is the real sponsor of the terrorist “war of a thousand cuts” against India.

Such denial is not to safeguard national pride and honor. It is to hide the fact that Britain has maintained its imperial interests in the region, and indeed, globally, without benefit of the apparatus of colonialism. This has been achieved primarily by keeping control of the illicit trade in drugs, which Britain pioneered in the 18th Century by exporting Indian opium to China. It is now far and away the most lucrative sector of the world economy, with revenues of over $500 billion annually.

In South Asia the control of the drug trade has involved the use of the ISI, Pakistan's notorious spy agency established in 1948 by a serving British Army officer, to godfather Al Qaeda and the Taliban. Together, they have kept Afghanistan as the lawless badlands necessary to produce opium; it now supplies over 90 percent of the world's illicit supply.

Where Britain does not maintain operational control of drug trafficking, as in Latin America, it provides money laundering facilities. Last year American authorities slapped a $1.98 billion fine on HSBC, Britain's largest bank, after investigators discovered that it had been laundering billions of dollars of Mexican drug money into the United States. The fine made not a blip in the stock market value of HSBC shares because investors have known of its primary source of profit since traffickers established the company during Britain's 19th Century “Opium Wars” to force the drug into China.

An interesting sidelight to the increased American pressure on British money laundering is that the terrorist “Left” insurgency in Colombia that has for decades provided the cover for drug running, has sued for peace and is now engaged in talks with the government.

The global money laundering system Britain put in place as its colonies dwindled is the core element of its new Empire. It consists of a string of tax havens around the world operating with London as a global hub. The system now caters to all sorts of criminals, ranging from super-rich tax evaders and corporate bigwigs hiding the proceeds of mispricing of trade to mafiosi engaged in garden variety organized crime.

The tax haven system washes an estimated $2 trillion annually into the “legitimate” world economy. According to a recent report from Washington-based Global Financial Integrity, an NGO headed by a former World Bank economist, it also drained about $6 trillion out of poor countries over the last decade. Adding up the estimates made by a number of experts indicates that the total of illicit assets in tax havens is some $30 trillion, double the GDP of the United States.

That massive pool of money generates the multi-billion dollar “hedge funds” that have made a travesty of free market mechanisms, especially commodity markets. Indians struggling with the ever increasing cost of petrol and diesel can blame it on hedge fund manipulations that have kept oil prices over $100 per barrel amidst the worst recession since the Great Depression of the 1930s. They can also blame the system for India's pandemic of mega scams: without a convenient way to stash black money the corrupt would be far less prone to steal on such a scale.

All this is becoming generally known because Germany and the United States, increasingly irate at the loss of billions of dollars in revenues to tax havens, have begun to push for change. Mr. Cameron's recent threats of a referendum that might take Britain out of the European Union is a response to pressure from Germany for uniform application of EU banking standards on all its members. The announcement last week that the next head of the Bank of England will be a Canadian is probably the result of pressure from the United States to clean up the City (financial center) of London.

Against this background, Mr. Cameron's push for India to open up its financial sector to British investment should be seen as an invitation to national suicide. His vision of a string of “business centers” round the country to facilitate British-Indian trade should be seen in the same light.

So what is the future of the British-Indian “partnership”?

It is difficult to see how we can build one when Britain is using its proxies to subvert and destabilize India. Perhaps the only way to make a new beginning is to be utterly blunt about Indian perceptions of and expectations from Britain.

Britain should stop whitewashing its colonial record and consider the grim reality that its Empire was the bloodiest construct of power the world has ever seen. In Africa, Asia and the Americas no nation has been as oppressive of other races. Britain was by far the leading slave trader out of Africa and transporter of indentured labor out of Asia. It has killed with famine, sword and fire more people than Genghis Khan, Atilla the Hun, Hitler or Stalin. In the defense of its imperial interests it has precipitated two World Wars and is now presiding over an empire of crime that drains the poorest countries of their hard earned wealth. During the days of Empire and now, treachery has been a staple in Britain's international relations.

How can Britain respond to such criticism?

At the minimum it can review its history books and initiate soul-searching among academic propagandists of the imperial record like Niall Ferguson, touted by The Times of London as the “most brilliant British historian of his generation.” A "Truth Commission" such as the one that eased South Africa out of the apartheid era might help. So could a national discourse on the value and meaning of life. In that journey of mind and spirit the British might find useful guides in the Sermon on the Mount, the Eightfold Path and the Bhagavad-Gita. In terms of state policy, a renewed British-Indian relationship will require Britain to withdraw support from terrorist groups and insurgencies, wind up its involvement in the drug trade, and stop running the global black market.

If all this seems a very tall order, it indicates how far Mr. Cameron's proposals stand from Indian perceptions of reality.