Akbar’s Troupes Must Have Felt Bites of Cold!

Whenever I write about the past I am reminded of Sir Winston Churchill’s quote, ‘The farther backwards you can look the farther forward you are likely to see.’ The quote befits the scene in today’s context, because all the time we are worried about the changing climate. We often think, ‘Was the climate of the years gone by was like today’s or was it different?’

Today, we are bogged down with the bug of climate change. People living in colder countries like Europe are facing the brunt of cold. Even now-a- days when the spring has officially set in; we hear of snow fall and sleet in London! Similarly, in north India too the last winters were terrible and prolonged ones and now the northern plains are heading for a scorching summer it seems! Well, has always been enigmatic and unpredictable to some extent.

It is said that present is a key to the past and past is a key to the future. This applies more with the nature, where evidences for the past are scant and difficult to interpret. This applies to the climate as well. Interpretation of past climates is like joining the pieces of a jigsaw puzzle. Researchers in India and abroad collect evidences of past climates from sources like stalagmites in limestone caves, tree rings, glacial varves etc. The results obtained are then pieced together to suggest a possible model of the past climate.

One such researcher is Bahadur Singh Koiliya a professor in the Department of Geology, Kumaon University, Nainital. He along with his colleague, Lalit Mohan Joshi, were joined by Syed Masood Ahmad and Waseem Raza of National Geophysical Research Institute, Hyderabad, and Jian-Xin Zhao and Kenneth D. Collerson from Centre for Microscopy and Microanalysis, School of earth Sciences, University of Queensland, Australia and Jaishri Sanwal from Centre for Earth Science, Bangalore.

As the name indicates LIA was a very cold period, (read ‘Monsoon Woes Recorded in Caves’, 30 Sep., 2007), during which large parts of higher Himalayas remained snow bound throughout. Human inhabitation of mountain had taken place and life must have been really tough for the locals! Imagine annexation of Sind-Balochistan in 1595 by Mir Mausam. Akbar dispatched him to capture that region. This area, at present has very cold winters in the upper highlands. Naturally the winters during 1595 could not have been congenial. The headquarters at Quetta face extreme winters even now - the scenario during the LIA must have been worse. What is perplexing is the determination of Moghul forces in their campaign of capturing large areas, irrespective of the climate.

Well, the objective of this write up is not to elaborate upon the history of Akbar’s regime, but just to highlight the fact that while LIA had set in, the Kings and their Soldiers were busy on their conquests! Normally for knowing the past weather reports we try to search in the records of Indian Meteorology Department. But the instrumental records available with them are a century old. It is the scenario everywhere. Therefore, to know the past climate record, help of proxy data like stored in stalagmites is studied. These stalagmites are known as speleothems. 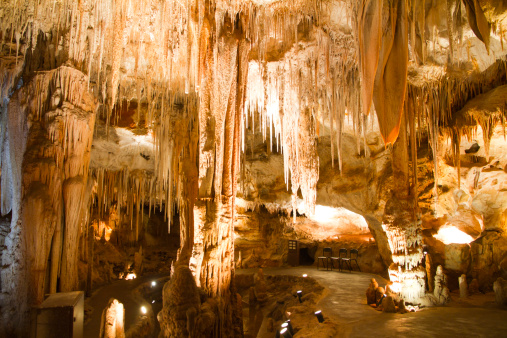 An example of Spelothems in a limestone cave

Let us first understand what speleothems are and how are they formed. Speleothem is a broad term that includes the stalactite, stalagmite and flowstone formed inside the limestone caves. Limestone is one rock that dissolves slowly with action of water. Thus large, subterranean, solution cavities are formed.

The speleothems are formed as long as rainwater enters the cave after passing through plant debris (humus) and carbonate bedrock (Limestone). The stalactites grow from roof downward, whereas the stalagmites grow from the floor upwards. As the calcium laden drops splash on the floor they gradually deposit the column of stalagmite. Stalactites and stalagmites often grow in pairs, and sometimes grow together forming columns. The growth rate of stalagmites depends upon the amount and rate of water entering the cave, the amount of acidity and minerals in the water, and the temperature and humidity conditions in the cave when it enters. Thus during a dry spell the growth of the stalagmite would be less.

As the constant drops of water percolating through the Limestone form stalagmites, the Oxygen and Carbon isotopes are retained in them. In addition, Uranium present in traces in the meteoric water is also contained in the stalagmites. Thus with the help of the growth rings of the stalagmites and the signatures ratios of the Oxygen and Carbon isotopes the scientists are able to find out the climatic vicissitudes the area has undergone. Oxygen isotopes are the keys for palaeoclimate reconstruction from stalagmites. The isotopic composition in stalagmite calcite (δ18Oc) is dependent on the isotopic composition of its meteoric rainfall source (δ18Ow) and also the cave temperature. Changes of global ice volume also can affect the net composition. Thus, stalagmites are proxy record of both temperature and rainfall variations. Not only the growth rates of stalagmites but also their shapes depend on variables determined by climate. Therefore, in turn it is possible to look into the past. The presence of traces of Uranium helps the scientists in ‘dating’ the stalagmites. In other words they establish the age of the stalagmites.

The results obtained from stalagmites, supplemented by the past temperature records, type of vegetation, data from the oceans like growth rate of corals etc. are used in drawing a conclusive picture of the past monsoons. The scientists are able to establish a monsoon history of past 10,000 years through this study.

Later, Bahdur and his colleagues analyzed speleothem of a cave at Chulerasim, a village near Chaukhutia district Almora in Uttarakhand. Their data showed a variation -2.7 to -5.9 percentile in δ18O and -5.3 to -8.8 percentile in δ13C. Singh et al state, ‘the climate during this period can be divided in to two stages, viz. a vet phase during the LIA (from 1590 to 1850 AD) and a comparatively dry phase during post LIA after 1850 AD.’ But as it happens in the nature, the climate never maintains a consistency. Bahadur and his colleagues had noted dry spells within the LIA. These could be linked with historic droughts in the Indian subcontinent.

Quoting studies carried out by others, using the Himalayan Ice core data, Bahadur et al state that between 1573 and 1595 AD, a number of minor events of famines occurred in Punjab, Kashmir and northern Sindh due to low rainfall affecting agriculture in the region. It was the mega-drought of 1570 during which the Emperor Akbar dug Kukar Talao in Nagaur in Central India. Similar monsoon failures between 1756 and 1768 coincided with the downfall of kingdoms in areas now referred as Vietnam, Myanmar and Thailand.

Monsoon failures and famines have been a great problem for the rulers of the past. In 1848 a famine led to mass migration from Ajmer to northwestern India. All these are now being correlated with the help of proxy data and in most of the cases the records of famines and drought are corroborated.

Our emphasis today, should be in building a data base of past annual climate changes for a precise prediction about the future.