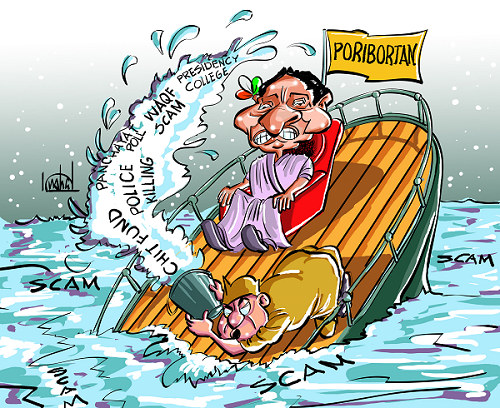 The chit funds that have given rise to much indignation recently were once upon a time apparently innocent games housewives played with the savings from their monthly budgets. These games, and they may not have turned extinct yet, were played under the banner of kitty clubs. A kitty club was an informal society requiring each member to contribute a specified sum every month. If a group of twelve such persons were to subscribe Rs. 100 each, then the size of the monthly fund would be Rs. 1200. A lottery decided who amongst the members had the right to spend the entire sum for the month. The facility of spending in excess of one’s saving of course brought along with it a liability. The lucky first, second, third and successive winners, were required to keep on contributing their promised monthly sums till each member of the “association” had been offered an opportunity to lay her hands on the regenerated dough.

The arrangement may be described in the language of formal economics too. Consider the first time lottery winner. She receives Rs. 1200 as a return on her payment of Rs. 100. This implies a monthly rate of interest of 1100 per cent, a return that is entirely guaranteed by capital contributions made by others, instead of the fund being invested in productive activities. Following the first month, the person’s return falls to zero per month, the prize having been already won. This involves a marginal loss, since her pledged contribution of Rs. 100 per month could have been invested in a recurring deposit account in a bank for a small interest earning. However, the 1100 per cent gain in the first month would far more than offset the interest loss in future and the first winner would clearly perceive herself to be a substantial gainer.

There may not be a unique formula for determining the person’s yearly rate of return. The easiest one though would be a simple average of the monthly rates of return through the year. Since the first month’s return is 1100 per cent and the remaining months yield zero, an approximate rate of annual return could be conceived as (1100/12) = 91.7 per cent. This massive return obviously dominates the returns from any other conventional avenues of investment and would appear super-lucrative to any person in the group.
Consider now the situation of the second winner in the scheme (assuming that no one defaults). She pays Rs. 100 for the first month and another Rs. 100 for the second to receive Rs. 1200 by the end of the month. What will be her monthly rate of return? One needs to solve a slightly more complicated equation in this case and the result can be shown to be 200 per cent per month for the first two months. Averaging out once again, the annual rate of return should be (200/12 + 200/12) , which works out to around 33.3 per cent. Interestingly enough, there is a sharp fall in the return for the second winner compared to the first. Nonetheless, it is large enough to induce a person to stay away from a recurring deposit option in a bank.

And then what will be the state of affairs for the third winner? Once again a slightly complicated calculation is called for and the answer to the question turns out to be a monthly return of 88 per cent for three months and a yearly return of (88/12 + 88/12 + 88/12) = 22 per cent.

The return will keep declining drastically in this manner and by the time we reach the penultimate person, her returns will be 1.4 per cent and 1.3 respectively. As for the last person, the rates of return are exactly zero. These are clear losers, since any run of the mill bank would pay a higher return on a recurring deposit. In other words, the later a person realizes her return through this scheme the worse off she is. The earlier payees beat the market, while it is the market that beats the later ones.

Rational calculation demonstrates clearly then that the kitty clubs, however innocent they might appear, are not examples of fair deals, for some win at the cost of others. The essential economic lesson that emerges therefore is that something cannot be produced out of nothing. The kitty clubs prove that there is a loss to be borne by some, the cost of the project if you will, for others to enjoy the benefits.

A chit fund, definition wise, is no different from a kitty club. In practice though, the funds operate differently, functioning as they do in the shape of ever expanding kitty clubs. A second example will clarify.

As opposed to a kitty club, a chit fund offers a stream of usually exorbitant returns to an investor. Let us assume that the first person to enroll has contributed Rs. 100 and promised a recurrent monthly return at the rate of 50 per cent. To ensure the promised return, a second person needs to be inducted with yet another investment of (at least) Rs. 50 during the second month from the inception of the fund. However, in the third month, one more person has to join to pay off the first person’s Rs. 50 and the second person’s Rs. 25. Hence, the third person must contribute Rs. 75 and then in the fourth month a fourth one will be required to keep the first three happy. In the process, the memberships of the fund as well as the fund size start to swell over time. Paradoxically enough, therefore, the larger the fund gets at any stage, yet larger it needs to turn at the next with an ever growing number of subscribers. This is how the so called bubble forms and sooner or later it becomes impossible to rope in fresh subscribers to keep the earlier ones satisfied. As soon as this happens, the fund managers are forced to default. Defaults lead to runs, as contemporary events demonstrate, and the chit fund goes bust.

Real life for sure is more complicated than the simple examples. Chit funds in the country do not offer monetary flows alone. They are known to promise land or residential flats in lieu of money as well. Besides, many of them engage in productive investment activity too, as evidenced by the growth of media, entertainment business, hotels and real estate enterprises. However, the returns from these ventures are never as high as the promised chit fund returns. Government of India data shows that during the period 1951-52 through 2011-12, the “trade, hotels, transportation and communication” sector had a highest annual growth rate of 13.5 per cent in 1995-96 and “financing, insurance, real estate and business services” had a highest growth rate of 12.6 in 2005-06. It follows that the excessive returns offered by chit funds could not have arisen from the productive activities they carried out in these sectors. Thus, to remain in business, the funds invariably resort to Ponzi schemes, viz. new borrowing to pay off old creditors. Even governments are often caught in debt traps such as these, but the problem turns far more serious when private organizations are involved.

The unfortunate part of the present story though is that, as opposed to the Sanchayita fiasco that involved the middle class mostly, the present holocaust has spread farther and wider, precipitating devastation amongst the down and out. The get rich quick promises easily lured them into the trap and there is no certainty now that they can ever be compensated by selling off the seized properties of the fund houses. Even if they can be part-reimbursed, the legal procedures are likely to be painfully long.

Further, one suspects that the early subscribers were relatively more affluent and the poor joined in later, attracted by the success of the better off. If so, the first comers had received the benefits smoothly enough and it is the underprivileged now that will bear the cost. As with kitty clubs therefore, the chit funds too involve a cost-benefit calculus. Only their implications are monstrously more cruel.

Originally published by The Telegraph, Calcutta, April 25, 2013 under the title Something Cannot Be Produced Out of Nothing.